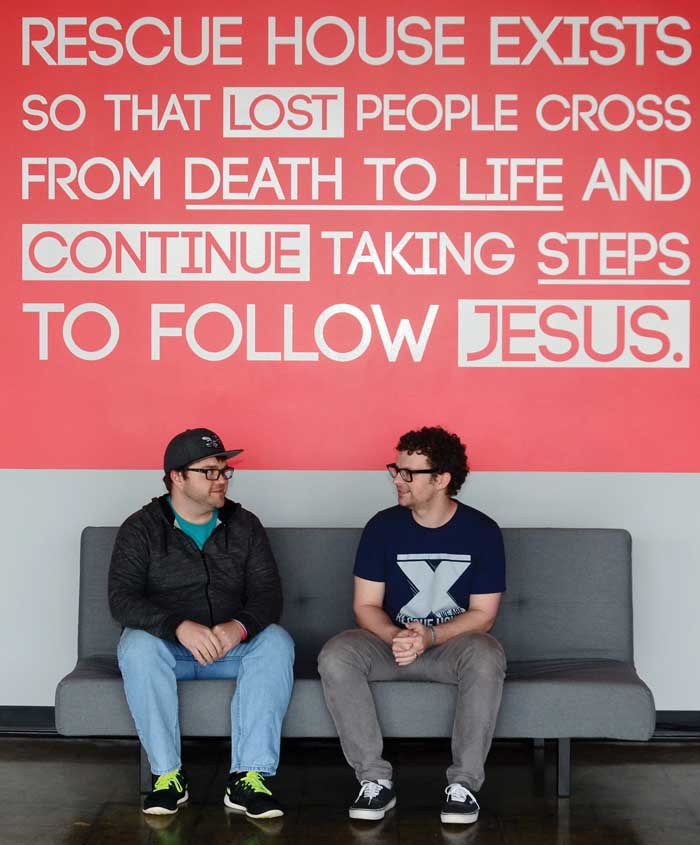 Thousands of people already do.

The church started by Matt Hudson in leased space on Wilkesboro Street, Mocksville in 2010, continues to grow.

People not only need to hear the Word of God, they want it, Hudson said.

Experience is what worship service is called. Expect all types of people in all kinds of clothes (“Just wear some,” he said.) Expect to hear music, see videos – maybe even dancing or painting.

“We want people to experience Jesus. We’re trying to get out of that mindset that you go to church to get served. We believe that if they will encounter Jesus and experience Jesus – their whole life will change.

“Experience is going to be different every time. Be prepared to be surprised,” he said. “God is a creative God. We believe to be creative is to be like Jesus. Everything means something. We creatively bring things to life.”

The pastors wear t-shirts with the Roman numeral for 10,000. That is the goal – to have 10,000 people profess their faith. If they reach that, another goal will be set.

As of early March, 1,660 people placed their faith in Jesus at a Rescue House experience.

“Every Sunday, people place their faith in Jesus,” Hudson said. “Rescue House exists so that lost people cross from death to life and continue taking steps to follow Jesus.

“Our whole church talks about that every week. We talk about it all the time. We’re a church for anybody, but we’re not a church for everybody.”

Rescue House members do all kinds of volunteer work with the church, with more than half having a duty for every Sunday.

Hudson was in graduate school when he felt a calling to start a church – in his hometown. Everyone he talked to about starting a church said don’t do it  – especially in your hometown.

“I felt God speak to me to come home and start a church,” he said. “So I did. I left everything behind and started a church in my hometown when everybody told me not to do it.

“I felt called by God to do it in Mocksville. I did it because the people I grew up with, I wanted them to place their faith in Jesus.”

He remembers that first service in 2010, with about 40 people in attendance. He spoke about the disciples, about how they were uneducated, sort of outcasts, but God chose them.

“He uses people who are messed up to start his church,” Hudson said. “He develops them and gives them new life. That’s what I want for our church.

“We don’t want perfect people. Rescue House’s job is not to judge, it’s to love. We just have our arms open wide.”

Not only do members do the work such as parking, operating the Kids House program and in production, they are constantly reminded of the goal to save more souls.

“That’s what Jesus has called us to do, be the hands and feet of him,” Hudson said. “Rescuing is a responsibility. If we’ve been rescued, it’s our job to rescue someone else.

“It’s our unique calling. We’re not trying to be better – just be who He’s called us to be.”

“These people are hungry for something they’ve never had.”

“God created every one of us in his own image. We preach the truth and we preach the gospel,” he said.

“We try to listen to Jesus and do what He says,” Hudson said. “We don’t have a hierarchy, we have Jesus above us. We hold each other accountable. We’re trying to reach people noone else is reaching, so we have to do things noone else is doing.”

The job is serious. Saving souls means the difference between Heaven and Hell.

“We want to be a church that unchurched people want to attend,” Hudson said.

He was 26 and just married when he started the church, but a statistic startled him. In the Piedmont Triad area, 1.1 million people were not connected to a local church.

“It’s insane. There’s a big market for people who do not go to church,” Hudson said. “We’re taking people bound for Hell to having an eternal rest with Jesus in heaven. What’s more important than that? It’s not me, but I get to be a part of it. There’s nothing more rewarding.”

The church logo is morse code for SOS, which was formed for “Save Our Ship.” At Rescue House, it means “Save Our Soul.”

Holbrook has been attending Rescue House for about three years. He came on staff last year as the Mocksville campus pastor. He was baptized at Rescue House.

He’s seen people with addictions, depression and other struggles turn their lives around.

“Just to see them give that up to God … and two years down the road and they’re a completely different person. They’re out there rescuing other people.”

Rescue House is still growing. Noticing that more and more people were attending from Forsyth County, a church was opened that meets at Parkland High School. Technology allows the same experience at the same location at the same times.

“This is how God works. With technology, we can reach more people,” Hudson said. “Our goal is to put locations all over the Triad – High Point, Greensboro – the western side of Winston-Salem. We’re still growing into this.”

“The most rewarding part is knowing God is using me to make a difference in somebody else’s walk with Christ. When you place your faith in Jesus, you become a new creation. It’s not that everything is OK, but they have peace.

“We have a front row seat for that, and we’ll never take it for granted.”