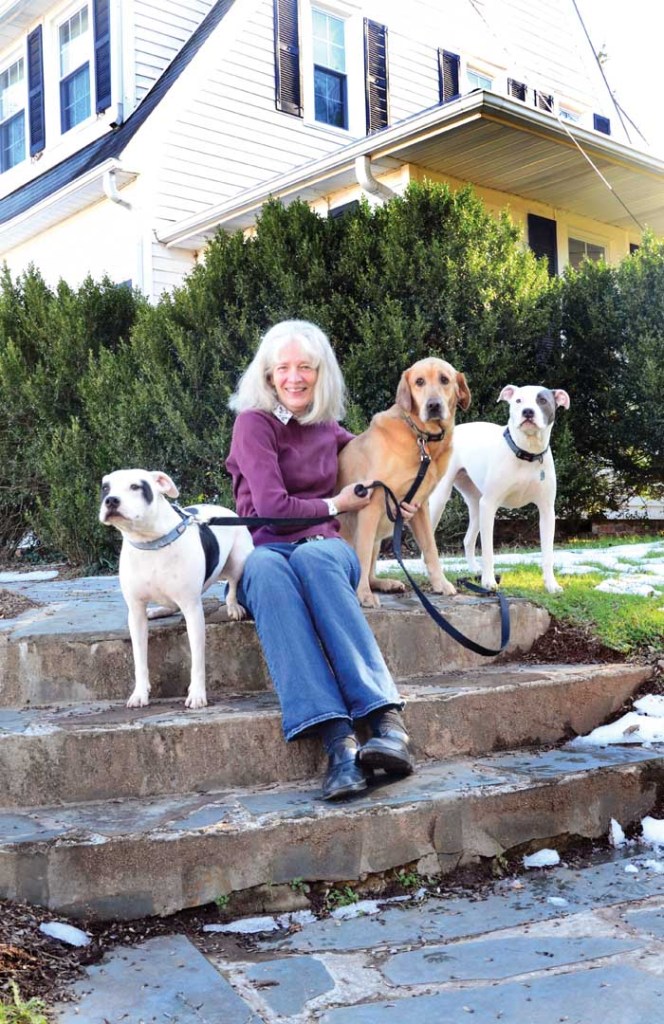 She was considering going to Stanford to earn a master’s in business administration. Then she met Charlie McAllister.

They fell in love, and she decided to stay in Washington and study at the University of Virginia. She wanted to marry him, but …

The answer to both was yes, and the couple now lives in Mocksville, where she is the director of the Davie County Public Library and president of the Humane Society of Davie County. He is a history professor at Catawba College.

And yes, there are three dogs living with them in their historic house. They both love history, too.

A love of dogs came early for Jane, growing up in Baltimore, Md. Her father, a minister, was an animal lover.

“Trixie (a Shepherd mix) figured prominently in my elementary school career,” she said.

It seems that after walking to school, Trixie often decided to go to school as well, and when it came time to go outside for recess, there was Trixie in the school yard.

“She would release the (gate) hatch and go to school. Everyone at school knew Trixie. I spent many play periods walking Trixie back home,” she said.

Part of the honeymoon with Charlie was spent deciding what kind of dog they would have, a golden or labrador retriever. They decided on a golden, and in moving to Winston-Salem, named him “Deacon.”

Two more goldens followed before the couple started adopting “mixes and mutts.” They have taken in dogs as foster parents, and kept them forever.

They have never had more than three dogs at a time, always one of the larger breeds, but Jane says she would have 20 if she could.

“Dogs have always been a part of my life. They’re great companions and they’re wonderful entertainers. They’re non-judgmental.”

There’s nothing like coming home from a stressful day at work to a couple of dogs.

“The stress dissolves. If more people had dogs, we would have more healthier and more happy people. If you let them into your life, they will change you for the better.”

She talks about the dog that alerted parents when their sleeping child’s blood sugar reached a dangerous level.

She talks about the veteran suffering from post traumatic stress who because of his condition and medicines, hadn’t been out of the house in months. He got a service dog, and is able to go out in public now.

She talks about the woman who suffered from seizures; now, a dog alerts her early on and she can take medicine.

“I know the value of these animals,” McAllister said. “I’m horrified when I see one being kept on a chain, or being beaten.”

Her path to the Humane Society and Davie County was a long one. She had always loved history and reading, but chose business for her career.

And yes, she was a champion volleyball player, competing in college and once sharing the court in an exhibition match with Wilt Chamberlain.

“I’ve taken the scenic route, and it turned out to be what’s best for me. I’ve developed a lot of life skills I’m putting to use and I love it.”

She earned her master’s in business in 1984, and was married within a week. She took a job as a corporate banker with Wachovia and moved to Winston-Salem. She had 120 accounts covering six states.

Her husband got a job teaching at Catawba College.

“He was tired of not being at home and we needed to move some place in between,” she said. “He said, ‘Jane, let me show you this tiny town I go through on the way to Salisbury’.”

It was Mocksville, and they came for a visit on a Saturday. City slickers, they went to the police station for a map and information. It was closed.

What kind of town closes the police station on Saturdays? She had never heard of that. It was the first of many firsts the couple has learned about living in a small town.

It was 1989, and they were shown the historic Doc and Helen Martin house – old, dark and empty.

“We walked through this house and fell in love with it,” she said. They moved in, and every workday morning, they would make the short drive to Main Street, and then head in opposite directions – her to Winston-Salem, him to Salisbury.

The corporate banking world became less and less appealing, and in 1999 she took a job with a start-up software company in Greensboro. She could do some of her work from home.

It became clear after a couple of years that the company wouldn’t survive, and Jane started thinking about her next adventure.

“I did the best thing I could have done. I went to a career coach and learned that my values were not in line with the corporate culture. I loved going to school, so …”

She tried to enter the master’s program in English at UNC Greensboro, but was rejected. It was heartbreaking. She had always had excellent grades, a good work ethic.

Already a patron at the Davie County Public Library, she started working there part-time alongside Doris Frye in the history room. Local historian James Wall was there almost daily.

She started studying library science at UNC-G, and asked then library director Ruth Hoyle what it takes to be a director at a library. Ruth told her to be patient, she was retiring in seven years.

McAllister earned the master’s in library science, and because of a family member’s health concerns, Ruth had retired earlier than she had told her friend.

McAllister became the library director in 2010.

“I believe in the power of reading, to change lives and to enrich lives. Libraries have always been places of hope.”

Many people who go to the Davie library are trying to better themselves, she said.

Although she loves being surrounded by books, she knows the digital world is important. There are many digital resources patrons can use from home if they just register with the library. Patrons can take full advantage of services without darkening the doors.

“It’s a critical community institution and I like having a say. And I like being surrounded by books. Truly, they’re magical.”

Jane and Charlie both love history, and they travel around the world (Possible partly because they’ve found a reliable pet sitter.).

She started volunteer work with the Humane Society of Davie County after finishing school, and the society was raising money to build no-kill adoption center. They needed someone to write grants. She had taken a course, so for the next two years she was on the board of directors, writing grant requests.

Then she became vice president for two years, telling others she had no desire to become president.

She’s been president for the past six years.

It’s a continuous uphill battle to keep finances above water, with a $200,000 per year operating budget for the center that is staffed daily.

Cause for Paws and Paws in the Park are the main fund-raisers, and while numbers for these events seem large, they include in-kind donations, meaning a donor provides advertising space or snacks or something else that doesn’t pay bills. “You can’t write a check from in-kind donations,” she said.

The center takes in from 200-220 animals a year, many from the county animal shelter. She says the new director, Gloria Wommack, is a great fit and things are becoming more and more positive.

McAllister is even considering stepping down as president.

Why not? It would give her more time at home with their current dogs – Bryce, Cody and Jade. And Charlie.