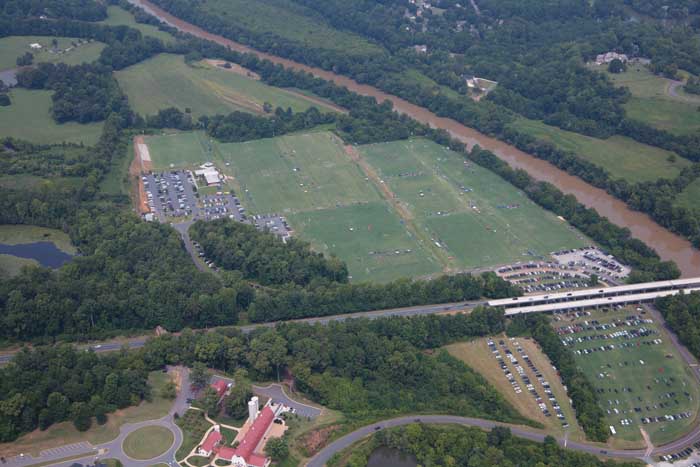 The complex dominates the scene headed into Davie County from Forsyth along the Yadkin River and I-40.

Scott Wollaston, executive director of the youth soccer association, said that his organization has contracted with the Huddle Up Group for a study that will hopefully provide an accurate picture of the economic impact created by the sprawling complex.

“We’re going to look at two different projects,” Wollaston said. “One is similar to what we discussed last year. If we were able to acquire some additional land and put fields on them, what that would do for us? Second, if we can’t purchase additional land, if we built four artificial turf fields on our current property on top of four existing fields, how much would that increase our capacity and how much economic impact would that have.”

Figures supplied in a 2011 study by Visit Winston-Salem estimated the annual economic impact from the soccer complex to western Forsyth County and Davie County to be $16 million.

“Artificial turf really increases your capacity because for our clubs the majority of our kids could train and play on artificial turf, and that allows the fields to rest and recover after bad weather or after a tournament weekend,” Wollaston said. “So we could host more events throughout the year.”

Wollaston estimated that the cost of simply putting four artificial fields on top of existing fields would be in the $3 million to $3.5 million range.

Of course, purchasing up to 25 acres of land, along with additional lighting and parking, would add much more to the bottom line.

“If we could have our first choice, we would want to expand the park,” said Wollaston, who previously stated that increasing the number of fields to between 16 and 20 increases the opportunity for more national events.

With four new turf fields along with the current 13 grass fields, the complex would meet that criterion.

In exploring any expansion, Wollaston knows partnerships will be needed.

“I hope the town sees this as great thing for the community,” he said. “This is an economic driver in the county as well, and perhaps there could be some more collaboration with the county and town. There has to be to help make this a reality.”

Wollaston said that sponsorships are the first step in the funding process.

“That’s a really good starting point from a commitment standpoint,” he said. “We’re looking to acquire a sponsor who could be for naming one of those particular fields. And then we need to be looking to get some assistance in terms of public monies.

“The next piece we’re looking at is the revenue model. We want to open this up to the community and for Davie County and Forsyth County to rent the fields. We don’t use them all the time. Local schools could utilize the fields. We hope to have adult leagues later in evenings and weekends. We plan to bring in as many new events as possible to the park. It’s a great asset to the community.”

Lee Rollins, Bermuda Run’s town manager, said that Twin City Soccer is a terrific attribute to the residual economic impact and quality of life for the town and Davie County.

“Certainly the soccer complex events drive hotel room nights for the Hampton Inn in Bermuda Run,” Rollins said. “I do know that on their biggest tournament weekends, rooms are booked as far west as Statesville.”

Mayor Ken Rethmeier said that the BB&T Soccer Complex has been a wonderful corporate partner for the town in providing a great venue for young people and their families to come and enjoy the sport they enjoy so much.

“We know they have made a considerable contribution to the health and well-being of our local business community,” he said. “The Hampton Inn is often sold out, and we know the soccer families are using our restaurants and stores when they are here for soccer matches. The town is better for their presence alone.”

In addition to soccer, Wollaston said that the park is starting to bring in more sports. For example, the facility will host a national Frisbee event and a national lacrosse event in May.

“As other sports are growing, we hope they will look to our park as a destination,” he said.

But soccer has long been the focus, and Wollaston said that Twin City Soccer became the first club outside of the state of Washington to partner with the Seattle Sounders, a major league soccer team.

“It’s an unbelievable opportunity for the players and coaches in our club to have access to information that a major league soccer team has and also for us to learn how to run our club,” Wollaston said.

The facility, which was built in 2006 and has grown from 650 kids to about 3,000 today, received more positive recognition when Mike Libber, president and owner of Elite Tournaments, ranked the BB&T Soccer Complex among the 5 Most Underrated Complexes in the country.

Next is getting the word from the Huddle Up Group on its findings for the park.

“The goal is for them to make their presentation by the end of June,” Wollaston said. “We’re looking forward to seeing what this third-party group tells us the economic impact is and what it could be. It will be great to see how we size up against other facilities around the country.”

Baseball off to best start in 16 years