Runners of all ages enjoy benefits 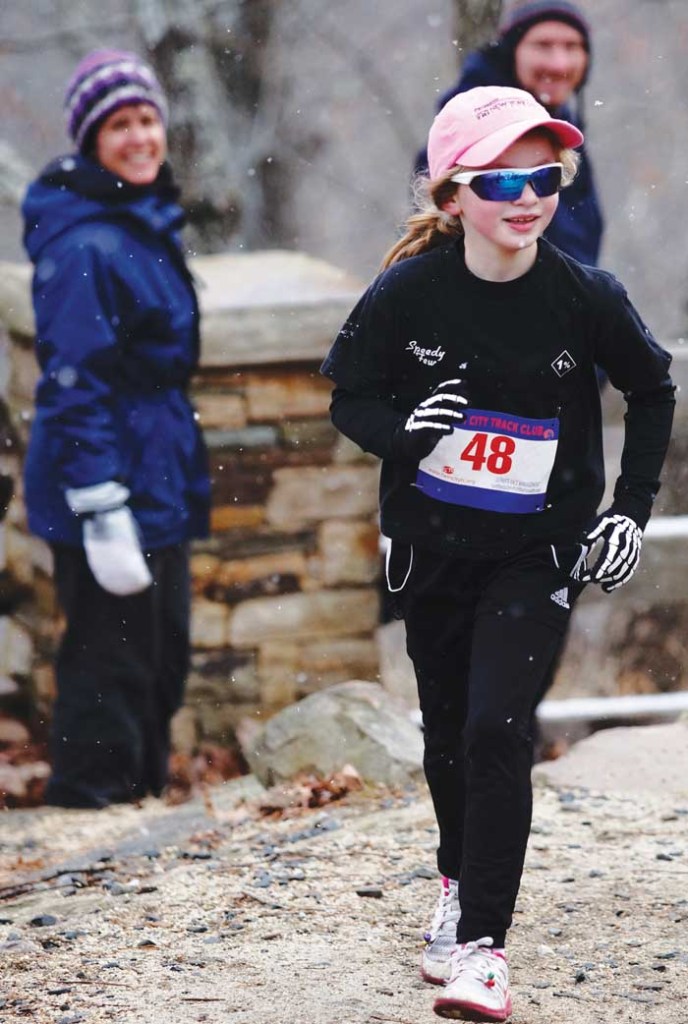 Libby is a reading tutor; Raelyn has reading homework.

Libby can drive herself to run races, but Raelyn gets chauffeured to hers by her grandfather, Doug Barney, who she calls Beep, and sometimes her grandmother, Faye, who she calls Mimi.

But while there are many differences, they have one thing in common: they love to run. And they love to talk about running.

Libby, 68, is the wife of retired physician George Kimberly, a race-walker. Libby said she started running eight years ago to keep up with him when he went out on his fast walks.

Raelyn started running two years ago, after becoming involved with the Go Far program at school.

Both were hooked immediately.

Libby remembers that in the first few races she entered, she’d walk throughout the race, and she remembers something else.

“I complained because you had to park so far from packet pick-up. So you had to walk to registration, back to your car, and then back to the start line. I was worn out before the race ever started,” she said.

But once the gun went off, all the feelings she’d had before the race were replaced with the thrill of what she was doing and the sense of accomplishment afterward.

“Perhaps running is addictive, but it’s a good addiction,” she said. “You may have heard of the runner’s high. I get that feeling after a hard run. And most every run is a challenge for me, but there is that disproportionate sense of accomplishment that makes it something I want to stick with as long as I am able.”

Raelyn was coached on the Go Far team by local runner, Dave Salmon. She said she started out able to run about a half a mile and gradually improved. Her first race was the Turkey Derby in 2014, and her time was 34 minutes.

“That’s because I had a lot of training days,” Raelyn said with a serious expression. “I don’t always want to go run but it’s a matter of if you want to win, you have to train.”

In her high school years, Libby played basketball, and she earned a black belt in Tae Kwon Do in the late 90s.

Raelyn was a speed skater before she started running and was, said Doug, the fastest girl at the skating rink and the third fastest overall. So while they both had some physical foundations, running was a new way to get fit and be healthy.

Libby said “If I don’t run for three to four days, I start getting aches and pains in my knees and in my back. My energy level drops and I may get in a bad mood.”

Most of Raelyn’s runs are on the outside track at the YMCA (She ran near her home once and said a hyena came out and scared her. After some discussion about native animals, she corrected herself, saying it was a coyote, not a hyena).

Libby likes to run at Salem Lake and Tanglewood, but she and George have been known to go out in the pitch dark for a run and walk around town.

Raelyn runs four times a week, and Doug has created a gym for her in their basement, with a mini trampoline, treadmill and hand weights.

Libby runs as many times a week as she is able.

When she first started, Libby said, she took beginning running classes in Salisbury and Winston-Salem, and said doing that not only provided her with a training schedule and the skills to help avoid injury, but the other runners encouraged and motivated her, and she made many friends from that experience and continues to make friends in the running community.

Raelyn spent 10 weeks with a trainer in Winston-Salem last summer, and gained the knowledge of technique, which is key to becoming stronger and faster and avoiding injury.

They remember their favorite and least favorite races.

For Raelyn, her favorite was the Retro Run, a 5k (she does only 5ks) in Tanglewood, where her time was 24:38, and her worst was the Pilot Mountain Challenge 5k in 2014, where she ran up to the top and thought she was going to start the descent to the finish, but Doug had to tell her she had to run around top first. He laughed when he remembered the look on her face when he told her to keep going. Her time at that one was 48:54.

Libby’s hardest race was the Mistletoe half-marathon in 2012. Ten days before the race, George wanted to race-walk the course. It was Thanksgiving Day, and George got onto the Wake Forest campus, on a search for a restroom. Libby didn’t know which building he went into, so she ran all over the campus looking for him.

“I ended up doing 15.5 miles that day, so I had no time to taper (decrease mileage before a race). I ended up doing the race in 2 hours 24 minutes, so I was happy with that, but I felt so bad afterward, really really bad.”

Her best time, she thinks, was at the Shamrock 5k in 2014, where she placed first in her age group with a time of 27:57. But that was also her best year of running, when she ran 25 races, including seven in nine weekends, but ended up with a stress fracture in her leg, which kept her from doing the other three races for which she’d already registered.

Libby has completed 155 races, including half-marathons, a 25k, a race where she did a 5k first and then a 10k right after, and many 5ks, generally placing in the top three in her age group. She said a favorite race is “probably dependent on good memories, a good shirt, good food, a good course, and indoor restrooms.”

Raelyn has done 37 races and generally places high in her age group. She loves getting medals and said the hard work is worth it. She also plays softball, loves to read, rides her horse in good weather, and sings. She’s in bed every night by 9, is up at 7 every day (with no grumbling) and maintains an “A” average in school.

And the health benefits, for her, as just as important.

“I don’t run for a longer life; I run for a stronger life. Running provides the weight bearing that helps prevent osteoporosis, which runs in my family, and also encourages good balance, which helps prevent falls, which increase in older populations. It seems like it’s taking me longer now to recover from races, but there is something about racing … to me it’s thrilling. The races support organizations or charities to raise funds for very important services, so other good comes from it besides our health and entertainment.”

Whether you are 9 and are thinking about starting to run, or whether you are having the same thoughts as a 68-year-old, Raelyn and Libby have advice.

“Dream big,” said Raelyn. “Don’t even think about losing, think about winning all the time. I used to do it for fun, and there’s nothing wrong with doing it for fun, but just realize you don’t get medals that way.”

From Libby: “Don’t overdo it at first. Make sure you have the right shoes. Join a beginner running class because it’s a good place to make friends and learn what you need to know to stay healthy. And if you run with a group, it’s a good way to learn new routes.”