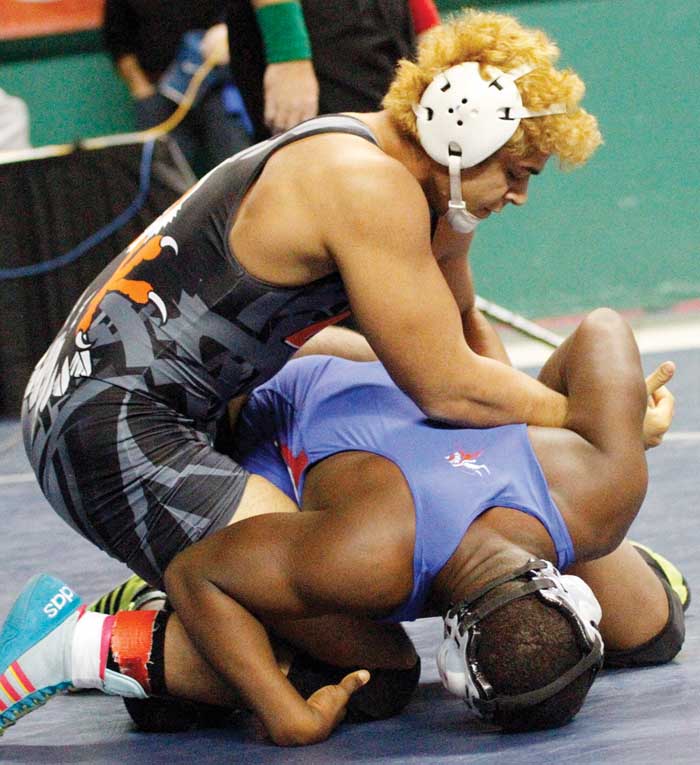 Isaiah Olmedo sets the record for wins at 59.

Davie wrestler Isaiah Olmedo didn’t have a storybook ending to his career – very few do – but it was still a special year for the senior.

Although he didn’t walk away with a state championship, he took third place in the 182 weight class and set a new record for single-season wins.

The individual state championships were held at the Greensboro Coliseum on Feb. 18-20. Olmedo and juniors Hunter Smith and Kyle McCune all made their first appearances in the state meet.

Olmedo won his first-round match 7-3. After lasting more than five minutes against Clayton senior Michael Lyons in the quarterfinals, Olmedo was pinned in the third period. Lyons went on to runner-up with a 53-3 record.

It takes a ton of grit to endure defeat and then make a run to third. Olmedo did just that with a series of hard-nosed performances, winning 6-3 to tie Zack Vernon’s record for wins at 56. Olmedo broke the record with an 8-3 decision. He followed that with a first-period pin.

Olmedo’s opponent in the third-fourth match was Glenn senior Jonathan Pascual-Hernand, who was 2-1 against Olmedo this season. A week earlier in the regional, Pascual-Hernand pounded Olmedo with an 11-3 major decision.

“(Pascual-Hernand) just outworked me – something that won’t happen next time,” Olmedo said following the regional.

Olmedo backed up those words, edging out a 4-3 decision to capture the bronze medal. Pascual-Hernand finished 58-11.

“It was a good one,” coach Buddy Lowery said. “I was proud of him.”

The champ at 182 was Southeast Guilford senior Garrett Church, who went 55-1. Three of Olmedo’s four losses this year were to Pascual-Hernand and Church.

After finishing first in the Central Piedmont Conference and third in the Midwest Regional, Olmedo went 5-1 at the Greensboro Coliseum to finish with a 59-4 record.

“There were one or two times where he got mule-headed and didn’t listen, but he was able to pull through,” Lowery said. “He wrestled hard. He showed heart.”

That’s a pretty good way to go out.

“He wants to go into youth ministry,” Lowery said. “He’s mentioned going to Piedmont Bible College. He’s got four (younger) brothers. He’s a good role model for his brothers. Jesus and Anthony look up to him at the high school. Isaiah is a good one.”

After getting a pin in the first round, he suffered a 16-1 technical fall in the quarterfinals. He bounced back with a pin before losing 15-0 in the next consolation match.

Smith won the CPC at 113, placed second in the regional and will enter his senior year with a career record of 127-39. He made history by tying for the third-most wins through a junior season. Waters had 148 victories after his junior year. Hilton ranks second at 128. Smith tied Hollifield at 127.

McCune went 1-2 at 170, but the effort and will were there. He suffered a heartbreaking 5-3 loss in the first round. He responded with a pin before losing 14-7. After placing third in the regional, he finished with a 42-22 record.

As a team, Davie made little noise, finishing 20th out of 66 teams. Southeast Guilford won the state championship with 119.5 points. Davie had 26.