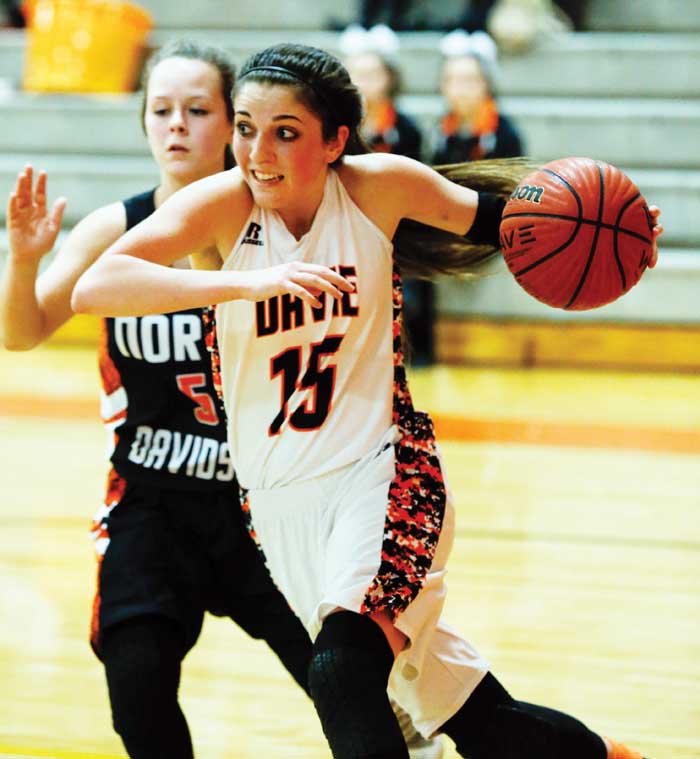 The stars seemed to be aligned for Davie’s girls basketball team to reach the Central Piedmont Conference Tournament final for the first time in 13 years. Davie’s semifinal opponent was Reagan, and even though the Raiders were co-champs in the CPC’s regular season, the War Eagles were far superior in meetings on Dec. 15 and Feb. 3.

What a letdown it was. Reagan handed Davie a crushing 54-42 loss, making Davie 0-5 in semifinal games since its last title run in 2003.

Two days earlier in the first round, the fourth-seeded War Eagles beat No. 5 Mt. Tabor for the fourth time this season, winning 51-34 at home on Feb. 16.

The first three matchups saw Davie win by nine, three and six points. After a tight first quarter, the Spartans (11-14) offered little resistance. Davie held an 11-10 lead after one quarter.

Despite foul trouble for Ashlyn Hampton and Aubriana Peebles, the War Eagles (16-9) managed to carve out a 26-19 halftime lead.

The War Eagles blew it open in the third. A. Peebles had seven points during an 18-8 run that translated into a 44-27 spread. Also during the run, Hampton had five, Madison Zaferatos four and Caitlyn Peebles hit a pair from the line.

Tabor did not threaten in the fourth.

“In the second half we did a good job of locking down on their scorers and holding them in check,” Ruemenapp said. “Aubriana was a huge spark (in the third). They were really struggling to score, and that’s when we were able to stretch our lead.”

While Tabor’s high scorer had nine points, Zaferatos dominated to the tune of 21 points. She hit 7 of 14 field goals, 3 of 6 3-pointers and went 4 of 4 at the line to record her fifth 20-point game of the season. That’s not all. She also had six assists, two steals and only two turnovers. She was the only effective shooter from deep as her teammates went a combined 0 for 7 from beyond the arc.

“Maddie (Zaferatos) was really good,” he said. “She handled the game really, really well. She was also willing to give it up and let other people deal with handling some of the pressure. That allowed her to focus on other parts of her game.”

The reason the 12-point loss to top-seeded Reagan in the semifinals on Feb. 18 was so deflating is Davie rolled past the Raiders 46-24 and 54-41 in the regular season. The semifinals and finals were held at North Davidson.

Reagan (20-4) emerged from the first quarter with a 13-10 advantage. The second quarter is when the Raiders took over, outscoring Davie 17-9 to take a 30-19 lead into the locker room.

Davie charged back in the third, rallying within 35-31, but Reagan pulled away again in the fourth. Davie was devastated by sophomore Amaya Tucker, who hit 8 of 10 free throws to finish with 27 points. Her teammate, Jasmine Joyner, added 17.

“We definitely expected more, but we didn’t play our best tonight,” Ruemenapp told the Winston-Salem Journal.

The War Eagles (16-10) came in with its third three-game winning streak of the season. Once again, a fourth consecutive win was elusive. Reagan, which tied West Forsyth for first with a 9-3 mark in the regular season, stopped a four-game losing streak to Davie. The War Eagles and Reynolds tied for third with 8-4 marks.

Hampton’s 17 points, her highest total in 10 games, was not enough. Zaferatos came through with 15, but the next Davie scorer only had six.