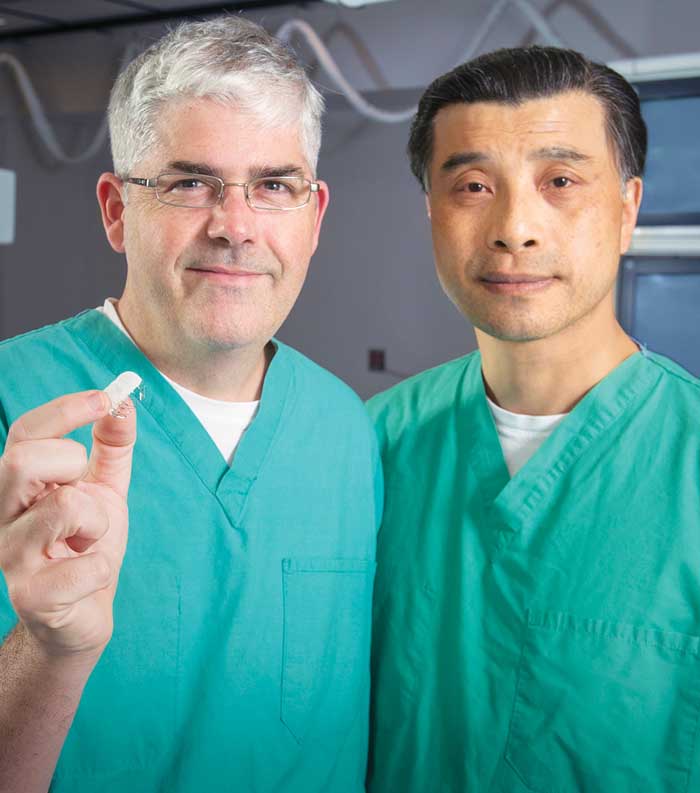 A new device the size of a quarter reduces the risk of stroke in patients with the most common form of atrial fibrillation.

Atrial fibrillation, or AFib, is a condition in which the upper chambers of the heart beat too fast, causing a rhythm that can result in blood pooling and forming clots in a part of the heart called the left atrial appendage. If the clots escape into the bloodstream, they can cause a stroke.

Currently, the most common form of treatment for AFib is the use of blood thinners such as warfarin, which can have adverse effects.

Cardiologist Patrick Whalen, M.D., sees about 30 patients a week at Davie Medical Center. He believes the new Watchman device will be a game-changer for AFib patients because it will allow them to avoid using warfarin, which:

• can put people at risk for bleeding, which is a problem, particularly for older patients; and

“I think the Watchman is vital,” Whalen said. “It will have significant impact on elderly patients, who are at the highest risk for falling and for bleeding. Everyone’s afraid of the consequences of blood thinners.”

Jack Wood, 80, of Martinsville, Va., had a Watchman implanted by Whalen on Jan. 4. When his transition period is complete in a few months, he will be taken off blood thinners. Wood was unaware he had AFib until being diagnosed with it while having cataract surgery about seven years ago.

“I just don’t like this label of AFib,’’ Wood said. “I don’t like having to be on blood thinners.’’

Manufactured by Boston Scientific, the device was approved by the federal Food and Drug Administration last year after being used in Europe since 2005. Whalen and David Zhao, M.D., executive director of Wake Forest Baptist Medical Center’s Heart and Vascular Center, are among the first cardiovascular experts in the state to offer the procedure.

Whalen and Zhao have performed nine procedures since late 2015, and expect the number of patients to grow to 150 a year.

“Not a day goes by that I don’t talk to someone about it,’’ Whalen said.  That’s partly because the number of AFib cases has increased by 66 percent in the past 20 years, Whalen said.

The reasons for the surge in AFib cases have to do with the general aging of the population and the rise in chronic diseases such as obesity and hypertension.

At Davie Medical Center, Whalen develops treatment plans for AFib patients that could include either medication early on to slow the progression of AFib or an ablation procedure to try to restore proper rhythm to the heart. If those treatments fail or if the AFib progresses, the Watchman device can be used.

Wood was previously treated with an ablation procedure to eliminate his AFib, but his condition returned after about a year. Wood, who travels regularly from Martinsville to Whalen’s clinic at Davie Medical Center, said he didn’t need much persuasion to have a Watchman implanted.

That’s exactly what the Watchman should do for people such as Wood, Whalen said.

“When I talk to patients about AFib, we talk about improving their quality of life and their quantity of life. We want patients living longer,’’ he said. “One important way to improve longevity is by stroke prevention.’’