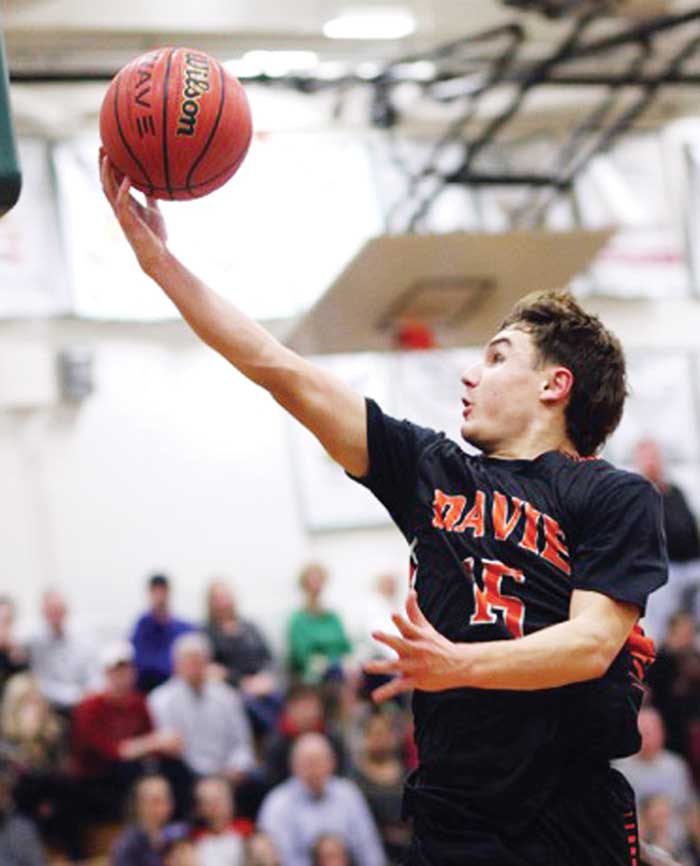 Cooper Wall does a finger roll.

The comeback was reminiscent of two other Central Piedmont Conference wins. Davie trailed Reagan and North Davidson by double digits before storming back.

While the Mustangs slipped to 8-9 overall and 1-6 in the CPC, Davie’s first game in 13 days resulted in the third win in four games. At 11-6 and 3-3, it remained in fourth place in the seven-team league.

Coach Mike Absher and assistants Tim Kenney and Shane Nixon have pushed the right buttons in the toss-up games. The War Eagles have the most CPC wins in three years, and they’ve drastically improved over the previous two years, when they went a combined 11-37.

“One of the biggest differences in this team is the conditioning,” Kenney said. “When it’s crunch time, they’re out of gas and we’re not.”

Absher was asked if his team leads the CPC in suicides. “I’d put us up there at the top,” he said with a laugh. “Some of those are planned and some of those aren’t planned.”

Jordan McDaniel and Heath Slabach were the major reasons for the exhilarating victory. They each poured in 23 points.

“(Slabach) is explosive. He’s deceptively quick,” Absher said. “McDaniel also rebounded really well and had three or four blocks. The last two nights he practiced really well and it carried over into the game tonight. He played like a senior who didn’t want to lose the game.”

Most of the first half was ugly for the War Eagles, who found themselves behind 36-18 midway through the second quarter. While Davie had developed considerable rust from the layoff, Parkland may have benefitted from playing the night before.

“The frustrating thing is they were beating us at what we do,” Absher said. “Our transition defense was terrible at the beginning of the game. They were just pushing it down our throats. We were way out of sync and were trying to play fast. That gets magnified because you’re not sharp and the ball’s going everywhere. One of our biggest weaknesses is shooting too quick when we get behind. Fortunately, we grow up at some point, start slowing down and start getting good possessions.”

At 36-18, Davie had a resounding response. It closed the half with a 16-7 spurt. McDaniel and freshman Michael Walton keyed things with eight and seven points, respectively, in the second. Cooper Wall blocked a shot on one end and passed to Walton on the other. Walton nailed the 3-pointer. Then Walton drew a charge. McDaniel tipped in a teammate’s miss with six seconds left in the half to shave Davie’s deficit to 43-34.

“Eliminating those (transition) buckets was huge, and finding five guys who could get back and play some defense,” he said. “Walton made a big shot and had an assist when we needed somebody to settle us.”

Gabe Gonnella’s second-quarter effort did not go unnoticed. “He went in and gave us some good minutes,” he said. “We started getting some loose balls that we weren’t getting earlier.”

Getting 12 points from Slabach, Davie inched within 58-52 in the third. Slabach hit two of Davie’s four 3s in the period. McDaniel’s 3 ignited a 10-2 run.

The run included Slabach heroics. After hitting a 3, he converted a short jumper off a nifty tip pass from Wall. Then Slabach got a steal and layup. Slabach wasn’t anywhere close to done, hitting a pull-up jumper and following an L.P. Mua swat with a 3-pointer. Walton drew another charge, McDaniel blocked a Parkland shot and Wall found Shoffner in the corner. Shoffner buried the 3 to cut Parkland’s lead to 55-52, prompting Absher to describe Shoffner as “cold-blooded” off the bench.

“We started going inside-out more,” Absher said. “We’re not telling them not to shoot 3s. It’s just how we get those 3s.”

Davie dominated Parkland 24-9 in the fourth to win going away. McDaniel scored 10 of them and Davie went 10 of 11 at the free-throw line, including 5 of 6 from Nic Starnes.

Wall’s assist to a cutting McDaniel triggered a 14-2 run. Starnes fed McDaniel on a backdoor play. Cory Heiner contributed a steal and layup. Following a timeout, Starnes and McDaniel executed another backdoor for a layup. When Mua hit a sky hook with 4:29 remaining, Davie had caught Parkland at 62-62.

Parkland ran out to block a Slabach 3-point try, but McDaniel alertly grabbed the deflection and got fouled. He hit both free throws to give Davie the lead for keeps at 64-62. After Parkland was whistled for traveling, McDaniel scored on a putback.

“That’s McDaniel making a hustle play,” Absher said of one of McDaniel’s big plays. “When the shot is blocked, the tendency is to give up on it.”

Up 68-64, Davie began to stall on offense. After running time off the clock, Starnes hit two free throws. Parkland got a 3-pointer from an unlikely source to chop Davie’s lead to 70-67 with 1:09 to go. Starnes, Wall, McDaniel and Slabach played keepaway for a few moments. Then Slabach found a seam down the lane and finished an and-one at the line. At 73-67 with 43 seconds left, Davie could smell victory.

“We wanted layups and free throws,” Absher said. “When Slabach turned the corner, I was thinking he probably needs to drive this. And he did and had a good finish. That was a big bucket.

“We’re better at keeping the floor spaced and moving the ball. We understand what needs to happen when we get up. We were very efficient the last three and a half minutes.”

Walton and Starnes had 10 and eight points, respectively. Davie prevailed even though Wall and Heiner had off nights in terms of points.

“That’s the neat thing about our team,” he said. “There’s a bunch of different people who can step up and play on any given night. That speaks to the depth of our team.”