Towns fight back over tax proposal 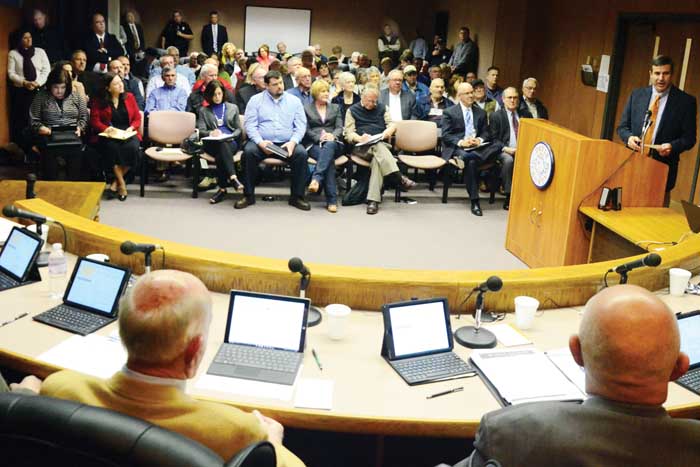 Bermuda Run Mayor Ken Rethmeier calls it the economy of scale, or the liability of smallness.

It’s the reason Davie’s three small towns have a larger percentage of the budgets in reserve than the county. Disasters – and opportunities – cost the same amount of money no matter what the size.

Officials from Mocksville and Bermuda Run got together last week to discuss a proposal by County Manager Mike Ruffin that the county change the way it distributes sales tax revenues that would mean hundreds of thousands of dollars less for the towns and nearly $1.5 million more for the county. They were at the county commissioner’s meeting on Monday to tell commissioners their concerns.

Cooleemee Mayor Steve Corriher told commissioners the change could cause the town to do away with its police department. The crime rate has dropped 200 percent in the last 10 years, he said.

“It is vital to Cooleemee, a third of our budget,” he said of the reduction in sales tax Cooleemee would receive. “We’ve come too far to be pushed backward. We cannot lose our police department.”

To make up for the loss, the town would have to double the tax rate, Corriher said. “We work with what we’ve got. We don’t come up here with our hands out.”

Van Hoy warned commissioners of the “doctrine of unintended consequences,” citing numbers from the Gildan project that shows Mocksville was ready for the development – including providing incentives. He said that to make up the amount of money being considered, Mocksville raising it’s tax rate would cost taxpayers more than if the county did the same.

Marklin mentioned 911 services, recreation, the library and other services the town provides funds for that are county functions, saying he disagreed with Ruffin that the town doesn’t pay it’s fair share.

Cagle told the county board that interlocal goverment cooperation is vital and efficient, leading to enhanced customer service.

Coley agreed that the impact to Cooleemee would be devastating, putting the town on the verge of bankruptcy. Mocksville and Bermuda Run, he said, would be limited in their abilities to improve their communities.

Bermuda Run can’t raise taxes according to its charter, Rethmeier told commissioners. The sales tax revenue represents 33 percent of the town’s operating income. “The reduction will put the town in a position to stop all discretionary action.”

Commissioners said they will vote on whether to change the distribution method in April, the only month allowed by state law to make such changes.

Ruffin said it came up because county commissioners had asked that taxes not be raised, but to look for additional revenue sources. This was one way to do that, he said, brought up early in the process to get feedback.

Comments from town officials last week, with reporters who had written about Ruffin’s proposal  invited, were not as civil.  The towns took to social media, urging residents to call county commissioners, to attend the meetings, all to voice their disapproval of the plan.

Ruffin outlined the county’s reasoning in a County Connection e-newsletter.

Van Hoy said the current method of sales tax distribution has been here for 40 years for a reason. “It’s fair.”

Most of the sales tax revenues come from the commercial centers – or the towns, said Bermuda Run Attorney Brian Williams. “The revenue centers are what’s being punished.”

Van Hoy said Mocksville has invested in its infrastructure – water, sewer, roads – that make it possible for businesses to locate here.

WalMart alone did some $78 million worth of business here last year, Marklin said.

Bermuda Run Manager Lee Rollins said the town can’t raise taxes, and monies in the fund balance are used for projects such as the roundabout at the US 158 entrance, with the town required to pay up-front money. Doing away with that fund balance could limit future participation in transportation and other planning issues.

Van Hoy wondered where and why the issue arose. “This issue of distrust in government appears to be intentional.”

“We shouldn’t apologize for being ready,” Van Hoy said. “It is the result of conservative and responsible fiscal management.”

He said town residents also pay county taxes, and that economic development could be the biggest loser if the proposal passes. He talked about the Gildan project in Mocksville, and said Gildan would pay $28,400 more if the town raised its tax rate than if the county did to raise the same amount of money.

“That chills economic development,” Van Hoy said. “Industrial growth lessens tax burdens. The math does not work for them (county). It’s not one time. It goes on.”

Ruffin had mentioned that the county needs more money to pay for services such as EMS, fire service and the sheriff’s department. Those are county functions and the county should be the one saving for those functions, Van Hoy said.

Rethmeier challenged the county to come up with specific numbers to justify the change. If the EMS needs more money, for example, spell out how much and why, and then work together to provide what’s needed.

“How do we know this action would resolve those issues?”