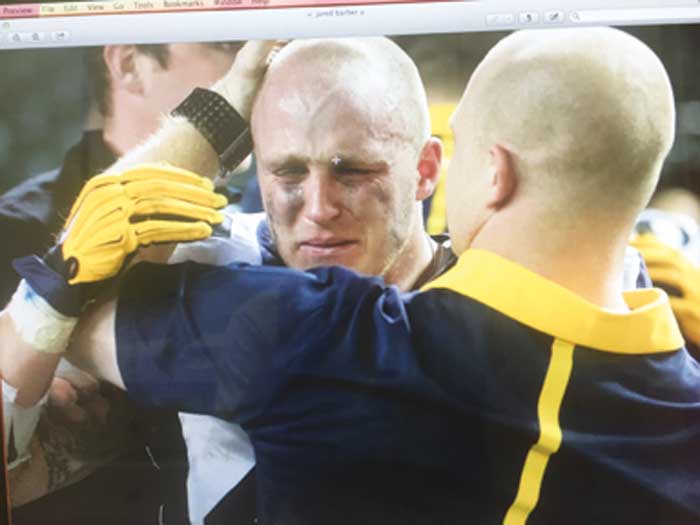 Jared Barber can't control his emotions after a bowl victory for West Virginia.

When West Virginia’s football team was 3-4 on Oct. 29, heads were hanging and shoulders were slumping. There was no shame in losing to 15th-ranked Oklahoma, No. 21 Oklahoma State, No. 2 Baylor and No. 3 TCU in consecutive weeks, but that didn’t make it any easier to stomach. After all, 3-4 doesn’t cut it in football-mad Morgantown.

Mocksville’s Jared Barber and the Mountaineers did something about it. They won five of the last six games, including a heart-pounding 43-42 win over Arizona State in the Motel 6 Cactus Bowl in Phoenix, Az., on Jan. 2. The only loss down the stretch was 24-23 on the road to Kansas State. With the bowl win, the proud program went out with a respectable 8-5 mark.

“By the time we were done playing (Oklahoma, Oklahoma State, Baylor and TCU), I think their record combined was 29-2 or 29-1 – something absolutely ridiculous,” Barber said. “So we went through the gauntlet. Those are great teams. All the seniors sat down with coach (Dana) Holgorsen and had a conversation about: What can we do to not give up, salvage the season and make this a good one to remember? We pulled together, went to work everyday and that’s what really I think saved the season. We weren’t satisfied with having a losing record. We were bound and determined.”

When the shootout with the Sun Devils was more than four hours old, Barber’s outstretched left hand secured an exhausting victory. His first pass breakup of the season could not have come at a better time.

West Virginia of the Big 12 Conference and Arizona State of the Pac-12 battled for four hours, nine minutes before a crowd of 39,321.

“It was by far the most nervous I’ve ever been in a game,” Barber said. “With it being your last game, you want to get the win so bad. It went back and forth, back and forth. It was nerve-wracking.”

When the contest with eight lead changes was in the books, Barber had delivered one of his top games. The senior Mike linebacker led the team with seven solo tackles.

With West Virginia nursing a 36-35 lead, Arizona State took possession with 6:19 remaining and covered 73 yards in a hurry, scoring on a 58-yard pass play. The Mountaineers answered with a 75-yard drive to regain the lead at 43-42.

The Sun Devils had one last shot. They started at their 40 with 2:12 to go. It was fourth-and-10 from midfield when Arizona State attempted a pass over the middle. Barber secured the win by reaching up with his left hand and deflecting the ball – barely. It wobbled behind the intended receiver. With only 1:26 on the clock, West Virginia had barely held on. Moments later, Barber was crying tears of joy.

“I was the hole player,” he said. “From watching film and with the down and distance, I kind of had an idea what they were going to run – a shallow dig and try to get free over top of me. I didn’t bite on the bait. I stayed back and played my responsibilities, and I was lucky enough to get a hand on it. It would have been nice to get all of it and get an interception. I was blessed enough to make that play. As soon as I tipped it, I turned my head to see if he caught it. It went over his head and I freaked out inside. I knew the game was probably over. I was celebrating with (senior cornerback) Terrell Chestnut and (senior linebacker) Nick Kwiatkoski.”

West Virginia’s offense picked up a first down and went to victory formation. “It was crazy,” Barber said. “I can’t put the feelings into words.”

Barber had a fine season. Despite missing one game with an injury, he was tied for second on the team with 64 tackles. He was third with 11 tackles for loss. He had 2.5 sacks. He scored a touchdown during a 38-20 win over Texas, scooping a fumble and running 42 yards.

Now Barber, who graduated last May and is five classes from attaining his Masters Degree, is taking a semester off to chase a dream to play in the NFL.

“Most (experts) have me (projected) as an undrafted free agent, and a couple have me going possibly in the sixth or seventh round,” he said. “The majority of them are saying undrafted, which I’m fine with. I’m going to Wisconsin tomorrow (Jan. 9) to train for two months and get ready for pro day, draft day and stuff like that. All I’m asking for is a shot.”