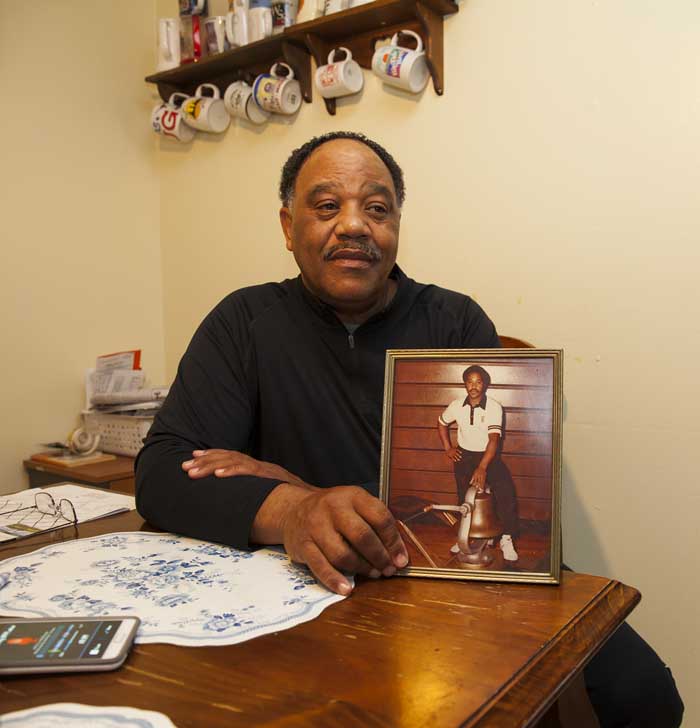 Clement Fleming talks about his years of coaching and playing sports.

On Sunday afternoons, boys of Cooleemee would gather in large groups around basketball nets behind the school. Not only did they develop skills that would come in good use on wooden courts at future schools, but also long-term relationships were being developed in a way that would last a lifetime.

Fleming never went to Cooleemee School because of segregation, but that didn’t keep him from meeting all the white boys.  Everyone lived so close and the game of basketball was the magnet that brought them together.

It was amazing to the black kids to see the white kids play baseball, basketball and football. The only sport they could play at the black school was basketball.

Fleming remembers when there were 50 to 60 people waiting to play. Fleming and Parker still reflect on how well the black and whites played together.  “There was never a harmful word said.”

Jesse Boyce and Grimes Parker were older and were big voices on that concrete court. When calling names to develop teams sometimes guys argued about who called first and they were able to talk it out instead of getting really heated.

As they got older sometimes arguments would get a little heated, but Grimes would say, “We aren’t gong to have any trouble. We are going to leave it on the court. “

At the end of the day they all would say, see you next week.

In 1965, integration laws were passed and Fleming entered Davie High at 11th grade. Later he went to Winston Salem State where he played a little ball, met his wife, the late Cora Jones Fleming and received a degree in health, physical education and history.

Returning home after college with no job in sight, Fleming had opportunities to sub for Parker and Charles Crenshaw at Cooleemee School. They taught him valuable things about teaching and coaching.

Knox Junior High School in Salisbury was where he taught 8th and 9th grade history and he coached football and baseball.

After four years he went to Philo Junior High School in Winston-Salem for two years. He taught Special ED for exceptional children.

In 1980 he got a job at Concord High School. He taught health, physical education and history and coached football and JV basketball.

After coaching JV basketball for eight years, he had to cut back because the demands on his football coaching required more of his time.

Fleming coached and taught along side E.Z. Smith III for 29 years. Smith was white so these two young men proved to be helpful in improving relations between whites and blacks.

The football program was down and these two went in there with their sleeves pushed up. Smith developed a balanced coaching staff of old, young and middle age.

Their first year produced 6/4. Everyone could see changes were coming. The next year they tied for the conference title. The third year won them conference championships and the fourth year they climbed to 8/2.

Their biggest rivalry was Kannapolis. The towns are so close and their reputation is one of the biggest rivalries in the state. Fleming coached at least 32 of those games and those were when you played your heart out, he said. It was always the last game of the season, first Friday in November.

“People would come as far away as California just for that ballgame.”

To help settle down the fighting between the two schools, the railroad company presented a big metal bell and said who ever won would keep the bell, paint it their school colors and keep it for a year. If the same team won again, they could keep it, but if they lost they had to give it up.

“It was a big deal,” Fleming said.

The same ceremony is practiced today but no one is allowed on the field.

Two state championships were won during his coaching career there.

All boys who try out for football and make it don’t necessarily know how to play. Fleming would have to take time and teach some boys that didn’t know how to put their feet in proper position for a stance.

They are still carrying around baby fat and they aren’t strong, he said. The coaches get them in the weight room, they work off the fat, they become stronger and eventually their confidence is higher to where they are proud to take off their shirts and show off their muscles.

“The confidence shows up in their attitude, in their class and in their work. As you are teaching them things you say, this is just part of your life. It’s not the vehicle that’s going to carry you. There aren’t many who are going to make a living doing football or playing basketball. So make sure you get something in your head. I didn’t make a living playing football, I made a living coaching or teaching, but I am using my degree to make that living.”

“Coaching football or any sport is trying to teach kids a way to get ready for the real world. The real game, that’s the game of life.

Fleming says he will always be proud of the two state championships he accomplished at Concord High.

“But more than that, he says, I’m more proud of the fact that I had the opportunity to work with so many fine young men, and the fact that those fine young men are older and still call me coach.  Every time I run into one of them I have to take 5 or 10 minutes with them.”

The conversation isn’t about football he says. It’s about what they are doing with their life and with their families.

“Coach, I appreciate what you did,” they say.

Besides Fleming’s family, he thinks the Grimes Parker Basketball Camp is one of the greatest things he has ever been involved in and he loves the fact he gets to work with his good friend and mentor.

“I have a good opportunity to give back to my community in a positive way. I used to be one of those kids.

“When those kids put on those uniforms, they get those shoes and basketball, their eyes just light up. To some of those kids that may be one of the most important things they get that entire summer or that year.”

Coaches Mike Gurley, Andrew Mitchell, Eric Epps, Brian Withers, Jim Baker and Monty Gray take time away from their own summer camps to teach the kids of Cooleemee the game of basketball. The records of these coaches speak for themselves. Their influence and passion come to our courts for free but is never ever taken for granted.

There are only about 70 slots available for students to sign up for the camp June 13-17.  Forms will be coming out in February.