Two Americas: The haves and the have nots 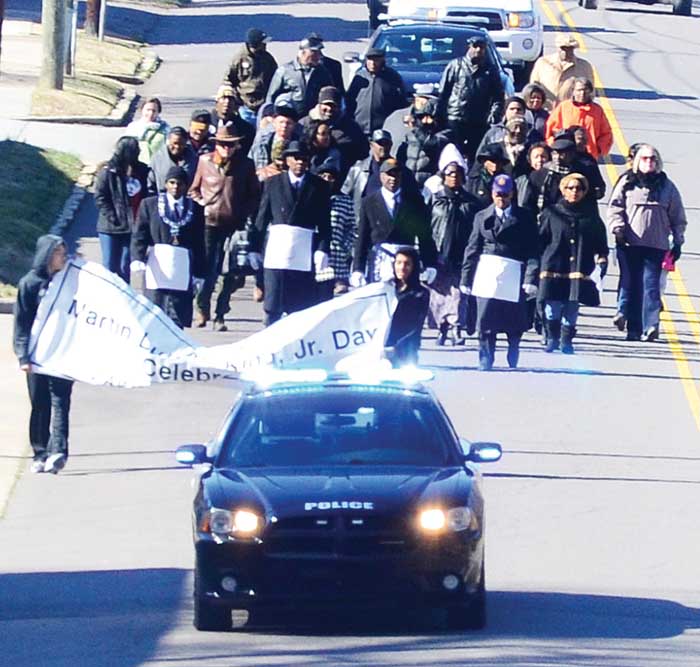 More than 50 residents march down Depot Street in Mocksville for the annual Dr. Martin Luther King Jr. celebration sponsored by the Davie NAACP.

From the days of segregation to a black man in the White House, Christopher “Skip” McCall has seen it all.

And while the speaker at the Davie NAACP Dr. Martin Luther King Jr. celebration on Monday is proud of accomplishments – there is still plenty of work to be done.

A native of Statesville, McCall grew up with separate water fountains for whites and “colored,” separate entrances and seats at theaters, a place at the back of the buses where black people were expected to sit.

Like most young people, he didn’t understand. His grandmother had told him to only drink out of the “colored” water fountain in town. “Inside of me, it just didn’t feel right,” he said.

One day, he gave in to temptation and took a drink from the white’s only fountain. “I would wonder, what’s the difference. I sneaked a drink out of the white’s water fountain and you know what, there wasn’t any difference.”

But there was a difference in the way races were treated, and integration of schools happened during his senior year in high school. He experienced discrimination first hand.

“I needed something to help me understand. Dr. King came with a dream – a mighty dream, and I began to understand it was happening all across America. I was still young, but I could feel a sense of hope inside.

“Dr. King was holding America accountable to deliver the promisory note that all men are created equal.”

What would Dr. King think about the realities of today?

“Sometimes, I feel like we’re sleepwalking,” McCall said. “We need to wake up and deal with reality.”

Dr. King urged the clergy to do God’s work and stand up for what is right.

“There is no greater country than the United States of America. America is blessed; however, there are still too many of us who are not experiencing the American dream.

“There are two Americas today. We’ve evolved into two distinguishable Americas – the haves and the have nots.”

“America has enough to go around. We need to make sure poverty is part of the Presidential agenda.” A larger percentage of Americans live in poverty now than in the 1950s, he said. “Our government is being sold to the highest bidder.”

Black men, he said, are under attack, too often by those sworn to protect them.

He quoted King: “Injustice anywhere is a threat to justice everywhere.”

“We must have justice with a blindfold on. We must ensure that people are treated fairly.

“In spite of all of this, I still have hope. Politicians always say God bless America. When are Americans going to bless God? We can bless God by helping the poor. When we bless God, God will bless us, and he’s getting a bit impatient. The time is now.”

President Obama has received less respect than any president in history because he is black, McCall said. “People will give you other reasons, but some people just can’t stomach the site of a black man sitting in the White House. I’ve never seen a president so disrespected. We may not have come here on the same ships, but we’re all in the same boat. We’re in this together.”

Human bodies are 99.9 percent the same, but the difference in the color of skin keeps us divided, McCall said.

Much of the talk from local NAACP officials was getting the vote out.

“Dr. Barber (state NAACP president) wants us to do something about this,” Brown said, “not to get people to vote a particular way – but to get them to vote. I hope we can turn out the vote at a higher percentage.”