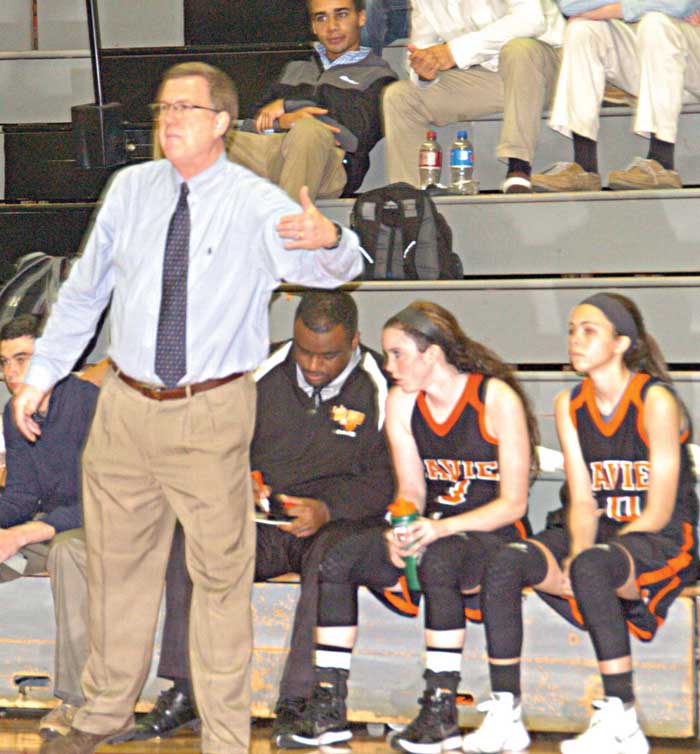 Dave Reumenapp coaches girls on the floor; while assistant Marnic Lewis helps those on the bench.

“We found a way to gut through and get this one,” coach Dave Ruemenapp said. “We lived to fight another day.”

The War Eagles, who beat Tabor for the third straight meeting, certainly know what the Spartans are feeling. Davie broke a 21-game losing streak to Tabor last year. Davie beat Tabor 43-34 in a nonconference game on Nov. 21.

But Davie, playing its first game in nine days, dug a sizeable hole in the first half on Friday. The first quarter ended with Tabor ahead 14-8. Things got worse for Davie in the second quarter as Tabor’s 15-5 run made it 29-13.

It was an exceedingly shaky first half for the War Eagles. In the Nov. 21 meeting in the Mary Garber Classic, they held a 26-19 halftime lead on the way to the nine-point win. They didn’t look anything like that team in the opening half.

“I don’t know (what happened),” Ruemenapp said. “We had pretty good practices this week and I thought we were ready. They were so well prepared and they were working so hard. They executed their offense really well, they were playing incredibly good defense and we missed a bunch of easy shots. I think we got really dejected and they kept wiping out any energy that we had. We called a couple timeouts to get it going and we couldn’t find much. At halftime, we were down by more than I thought we could ever come back from.”

Davie was an entirely different team in the second half, particularly the third quarter. On the first possession, Emma Slabach jumpstarted her team with a 3-pointer. With that, a monster quarter was set in motion.

Madison Zaferatos provided the signature play of the third, hitting a 3-pointer as she was fouled.

“I swear the ball never was higher than the rim,” Ruemenapp said. “But somehow it hit the front rim and had enough rotation on it that it kept climbing and climbing and fell in.”

Zaferatos finished the four-point play at the line. Davie outscored Tabor 21-5 in the third, forcing a tie at 34.

“We made a couple defensive assignment changes,” Ruemenapp said. “We got matched up a little better, we got a bunch of stops and we kept chipping away and chipping away. And man, everybody that played contributed in every way they possibly could. There was nobody that they could focus on. Once we got a couple of breaks and our (man-to-man) defense started working, we felt like, ‘We can do this.’”

Then Davie survived a back-and-forth fourth quarter. After Davie missed some free throws, Tabor nailed a 3-pointer. Zaferatos stepped to the line with Davie up a point. The senior and fourth-year floor general came through, hitting both. Tabor had one last chance with seven seconds left, but it had to go the length of the court. Ruemenapp decided not to put Tabor on the line.

“We talked about fouling in the huddle,” he said. “We decided to guard their best two shooters. Just about everything had to go perfect for them to get the ball the length of the court and hit the (3-pointer).”

Tabor’s 3 missed and Davie had a big win. “They came pretty darn close, but it didn’t go in,” he said.

There was not one big star for Davie, which converted 19 of 40 field goals for an outstanding 48 percent. A cohesive team effort did it.

“We just decided we were going to compete,” he said. “I told them at halftime I didn’t know if we could come back from the deficit or not, but I just wanted them to compete as hard as we could. That was the only way we were going to be able to get any momentum for the rest of the conference season. They bought into that and then Emma hit a 3.”