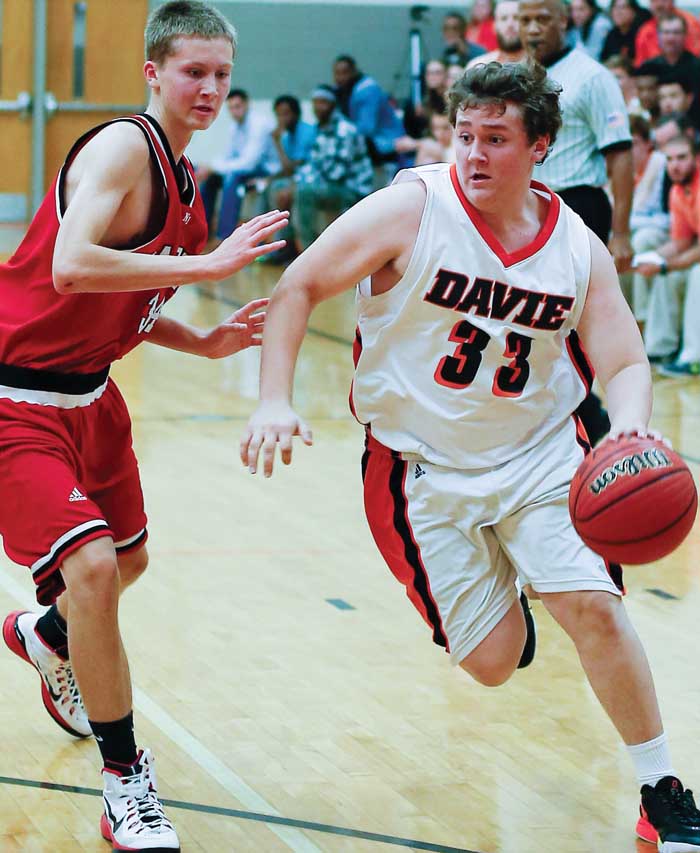 Ross Starnes gets by his man.

The first quarter was competitive, with Davie leading 14-13. In the second quarter, it turned into a no-contest. Davie ripped off a 17-0 run to take a 36-17 advantage into the half. In the quarter, Davie got 3-5 points from Coleman Sell, Hendrix, McCormack, Troy Griggs and Ross Starnes.

Davie’s momentum kept going in the third as the margin grew to 56-27.

“I wasn’t happy at first because they were beating us in parts of the second quarter,” coach Bruce Wallace said. “We switched to a 1-3-1 zone and went on the 17-0 run. It was probably the best team win I’ve had at Davie (in two years).”

After missing the last game on Dec. 18, Hendrix returned with a vengeance, scoring 19 points to pace 11 scorers. He knocked down eight field goals.

“He played efficiently,” Wallace said. “He didn’t miss many shots. He may have missed two or three the whole game. He takes good shots. He’s just a really good ballplayer.”

“That was probably McCormack’s best game,” he said. “He passed it well. He finally started going down to the post and almost all his points were inside. He’s finally being aggressive and going to the rim. We’ve got a play now where he gets an alley-oop, and he had two alley-oop layups off that play.”

One day later, the War Eagles kicked into high gear in the third quarter and dispatched the Australians 60-41.

Again, Davie (7-4 overall) started slowly. It trailed 13-12 after one quarter. It was up four in the second when the 6-foot-5 McCormack sparked a run that produced a 22-16 halftime lead. The play was a steal and dunk.

“That gave us momentum going into halftime,” Wallace said. “It was his first dunk in a game. I’ll be honest, I thought he was going to miss it. But he got up there. In practice he’ll try dunking and he’ll miss probably half of them. That was definitely his best dunk that I’ve seen. I was excited for him.”

Davie blitzed the Australians 29-8 in the third, resulting in a 27-point lead. Sell hit two 3-pointers in back-to-back fashion “and we busted it wide open after that,” he said.