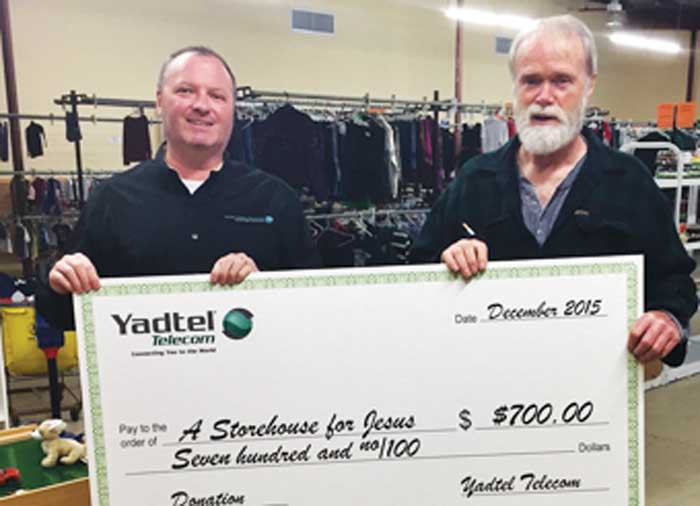 Shannon Adams presents a check to John Collins of A Storehouse for Jesus.

A Hillsboro woman lied during her testimony in Davie Superior Court last week, in an effort to escape a conviction for DWI.

Video from his dashboard camera shows the gray Honda Dole was driving, followed by a white Mercedes Benz, whose driver placed the call to dispatch.

Behind the cars, the Mercedes moved over, allowing Hall full view of the Honda, which weaved from center line to side line in her lane. Even after Hall activated his blue lights and siren, Dole continued weaving in her lane for about a mile, until Hall pulled up beside her and motioned her over.

Dole complied, pulling off the side of the highway.

When Hall asked for her license, she initially handed him a credit card.

“That’s not too abnormal, I guess,” Hall testified. “People hand us their credit cards on a normal basis.”

Dole’s face was relaxed and droopy, Hall said, but her speech was normal, and when she and Hall walked down the side of the highway, she did not sway, but Hall noted she was “highly focused” on her walking.

She failed two physical sobriety tests, the walk and turn and the one-legged stand. On the video, Dole lost her balance several times and used her arms and car to balance herself. Hall said on the HGN (Horizontal Gaze Nystagmus) test, when Hall was checking to see if her eyes moved smoothly as they followed a pen, her eyes jerked, an indicator of impairment. Dole told him she had taken Soma, a muscle relaxer, and Lyrica, for nerve and muscle pain, and listed her medical conditions, which included fibromyalgia, bulging discs in her back, hypoglycemia, and insomnia.

Hall also found half a Valium in an unmarked pill bottle in her car. Dole told him she had a prescription for both the Soma and the Valium, and became “frustrated,” Hall said, when he put her pill bottles on the hood of her car. She can be heard on the video asking him if that was necessary and she testified she was embarrassed that people driving past could see her performing the field sobriety tests and her pill bottles on her car.

Dole’s attorney, Ken Tisdale, asked Hall if he asked Dole if she had any medical conditions that would keep her from being able to perform the sobriety tests, and Hall said, “Not that I can recall. Probably not.”

Dole called her husband from the side of the road, and Hall testified he heard her say she was “a little woozy from the Soma” and that she didn’t sleep well the night before. She later testified she was just joking around with her husband on that phone call.

Dole said she took a Soma around 10:30 that morning and left Cary around 4:30 in the afternoon to attend the last of a session of herbal medicine classes. She ate before leaving Cary and planned to stop on the way to eat again. She had a GPS unit attached with suction cups to her windshield, and she said as she was driving along with her radio turned up, the GPS suddenly popped off the windshield, startling her, and causing her to swerve. She was beginning to feel dizzy due to the hypoglycemia, she said, so she reached into a bag on the seat beside her for almonds, but was unable to open them, so resorted to eating an apple. She was pulled over just after finishing the apple.

She testified she was surprised she was being charged with DWI because she felt fine.

Hall transported her to the hospital, where Trooper Gary Mills, a drug recognition expert, performed more sobriety tests. He testified Dole was unable to maintain her balance, and on six attempts to touch her finger to her nose, failed three of those.

“When I asked her to do a test with multiple instructions, she couldn’t focus. I couldn’t do the HGN test because she kept getting distracted by Trooper Hall and he finally had to leave the room,” Mills testified.

Her pulse and blood pressure were normal, Mills said, but she kept insisting she felt fine and her bad driving was due to the GPS incident and eating the apple.

“She repeatedly said she felt fine and took her medicine as prescribed,” he said.

Dole’s doctor, Tom Motyka, testified he has been Dole’s doctor for about 10 years. He said Dole has a variation in her liver enzymes that causes her to process medicine more slowly, meaning more medicine stays in her system for a longer period of time than in people without the variation.

After watching the dashcam video, Motyka said, “It didn’t necessarily look like an impaired person to me.”

On cross-examination, he said her poor performance on the field sobriety tests could have been caused by her medicine, her medical conditions, or both.

Aaron Joncich, a chemical analyst for the state, testified both Soma and Valium were found in Dole’s system but he wasn’t able to determine the amount. Both of those are central nervous system depressants, which can cause sleepiness, drowsiness and sometimes dizziness, he said.

Doug Scott, a drug recognition expert instructor who was responsible for getting the program into the state, testified Hall performed the HGN test too quickly, taking only four seconds to move the pen back and forth, instead of the recommended 16 seconds.

“At that rate, you are going to miss clues, but also an individual’s eyes can’t track smoothly at that speed,” he said.

He said Hall should have faced Dole away from moving vehicles and taken into consideration the factors that made her a bad candidate for the field sobriety tests, including her weight, back issues, and her age.

“In your opinion, was she a candidate to do the walk and turn test?” asked Tisdale. Scott answered, “In a person like her, who is 30 pounds overweight and at her age, 48, she was not a good candidate, even without her fibromyalgia and back pain.”

A former police officer, Scott said he would not have arrested Dole for impaired driving and after making sure she was not impaired and hearing her reasons for her bad driving, would have let her drive away with only a warning.

Scott stated, “I have a much higher degree of training than anyone else in this courtroom.”

Dole spent parts of two days on the stand, talking about her former work as a doula and her current work as a massage therapist, and her long list of ailments. She said after years of unexplained pain, she was finally diagnosed with fibromyalgia, caused by Lyme disease after being bitten by a tick. Some days, the pain was so bad she could not get out of bed and on her best days, was always achy.

She was in the hospital in Raleigh in 2010 for anemia and pain that was discovered to be coming from her gall bladder, and she fell down in the hospital, injuring her back. She has had whiplash, hypoglycemia, migraines, and insomnia. She said she had taken Soma and Lyrica in the morning before her trip but had taken Valium four or five days before the trip.

She said Hall “really started paying attention to things when I mentioned Soma.”

On the last day of the three-day trial, Assistant DA Steve Boone asked Dole, “Do you recall a conversation with Trooper Hall about the field sobriety test results being from medical issues or from Soma? And you said, ‘It’s the Soma obviously, plus I didn’t sleep last night.’”

Dole said she would have never said that because she didn’t believe the Soma caused her any issues since she had taken it that morning.

The jurors were taken out of the courtroom and Boone told Judge Mark E. Klass the video the jury previously saw was the short version, and on a longer version, Dole can clearly be heard saying ‘It’s the Soma obviously.’

He played the video for Klass and wanted to play it for the jury, but Tisdale said because the state had already rested its case, they weren’t allowed a “do-over.”

Boone said he would play the video with the jury still out to see if it refreshed Dole’s memory, and she could testify again when the jury was back, and Klass allowed that.

Once the jury was re-seated, Boone asked, “Do you recall saying ‘It’s the Soma, obviously,’” and Dole answered, “Now I do.”

Tisdale asked Dole about her life, and she said she feels much better, is sleeping well, has lost weight, is able to exercise and is on a pain patch that produces little to no side effects.

He asked: “Do you have an opinion on whether you were impaired or not?” and Dole answered, “I was not impaired.”

In his closing argument, Tisdale told the jury they had to be entirely convinced of Dole’s guilt, reminding them her own doctor, who has known her for 10 years, said he couldn’t tell if her poor performance on the field sobriety tests was a result of the Soma or her medical conditions. He said her normal pulse and blood pressure were not what was normally seen with central nervous system depressant use, and Hall did not perform the HGN test properly.

Additionally, Tisdale said, “Trooper Mills circled the word uncoordinated, and you heard Dr. Motyka say Ms. Dole would be uncoordinated on the best of days due to her medical conditions. She was not sluggish, had no slurred speech, no drowsiness, no droopy eyes, and did not fumble. Ms. Dole was honest and told them what substances might be found in her blood, but she was not under the influence. You heard testimony that one-20th of a therapeutic dose of the medicine would show up in her system. We don’t know how much was in there, we just know some was in there…The definition of impaired driving says the defendant is under the influence of an impairing substance; they have to be under the influence, not merely have the substance in their body.”

Tisdale said if anything, Dole’s driving was careless and reckless, but she was not impaired.

Boone said, “Isn’t it suspicious when somebody has an answer for everything? Lots of different people have given lots of different reasons why she was driving poorly. Her doctor said it was insomnia, the drug recognition expert said it was back problems, and she said it was her GPS. Trooper Mills told us she said to him Soma doesn’t usually bother her but maybe with the lack of sleep, it ‘screwed things up a bit.’ You heard Doug Scott testify it appears he spent six years of his life getting the DRE into North Carolina and he even used as an officer for a period of time but when he got on the stand, he wanted to discredit anything that had anything to do with the defendant, so his testimony is not credible.

“Some of her medicine was not prescribed by her doctor … and she said she took the Soma as prescribed but later said the prescription said to take it every four to six hours, so then she wants us to believe she didn’t take it as prescribed because she only took it at 10:30 that morning. And then there’s the statement she made, ‘Well it’s the Soma obviously, plus I didn’t sleep.’”

The jury deliberated about 40 minutes before returning a verdict of guilty.

Klass sentenced Dole to 60 days, suspending that 12 months unsupervised probation. She was given credit for a substance abuse assessment and was ordered to perform 24 hours of community service within the first 90 days of probation. She is to surrender her driver’s license and not operate a vehicle until she is licensed to do so. She must pay a lab fee of $600 and court costs.