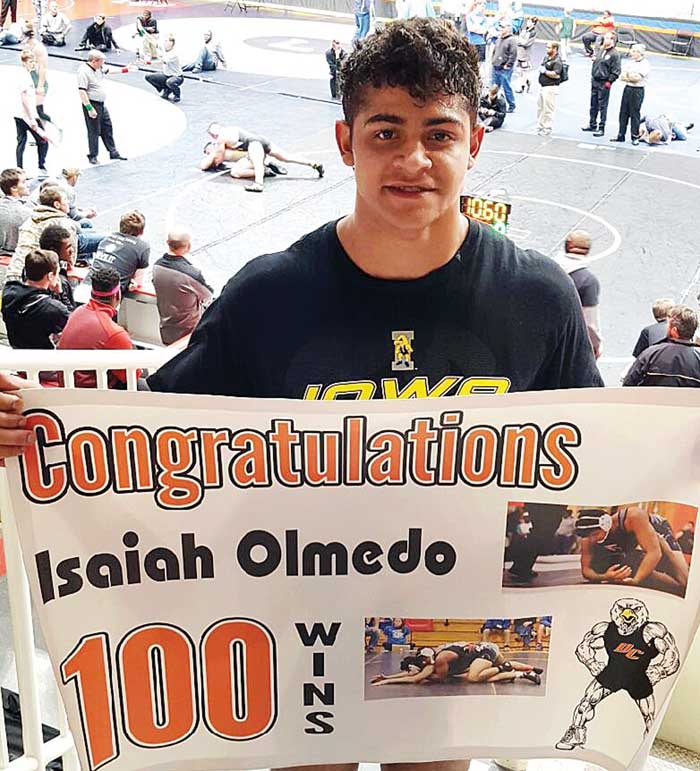 Coming away with conference, regional or state championships may be asking a bit much for this year’s Davie wrestling team, but give the War Eagles their due: They’re having a pretty good season.

And in the Holy Angels Invitational at Bojangles Coliseum in Charlotte on Jan. 1-2, the War Eagles took third out of 66 teams. The tournament played out on 10 mats, and 14 Davie wrestlers combined for 32 wins against 25 losses.

Senior Isaiah Olmedo continued to torment opponents at 182, going 5-0 to win the weight class and reach 100 career wins. He reached the finals with two pins, a major decision and a minor decision. Awaiting Olmedo in the championship match was a 27-1 Raymond Rodriguez of R-S Central. Olmedo dealt him his second loss with an 8-5 decision. The sweep lifted Olmedo’s season record to 38-1 and his career mark to 100-32.

“He’s pretty solid all around,” Lowery said of Olmedo.

Junior Hunter Smith showed his prowess at 113 by pinning four straight opponents. He encountered a major test in the finals, facing an undefeated Esco Walker of Hopewell. Walker was too much, beating Smith 14-2. Still, it was an impressive 4-1 showing for Smith, who is 37-3 on the year.

“He wrestled real well,” Lowery said. “He’s a good wrestler. In the finals, he just didn’t wrestle well. That guy is ranked No. 1 in the state, and I guess he’s ranked No. 1 for a reason.”

Davie won the first four matches comfortably, the scores being 51-27, 68-18, 42-29 and 54-27. The championship match against Rock Hill was a serious battle, and Davie prevailed 39-34 thanks to freshman Peyton Sherrill’s go-ahead pin in the final weight class.