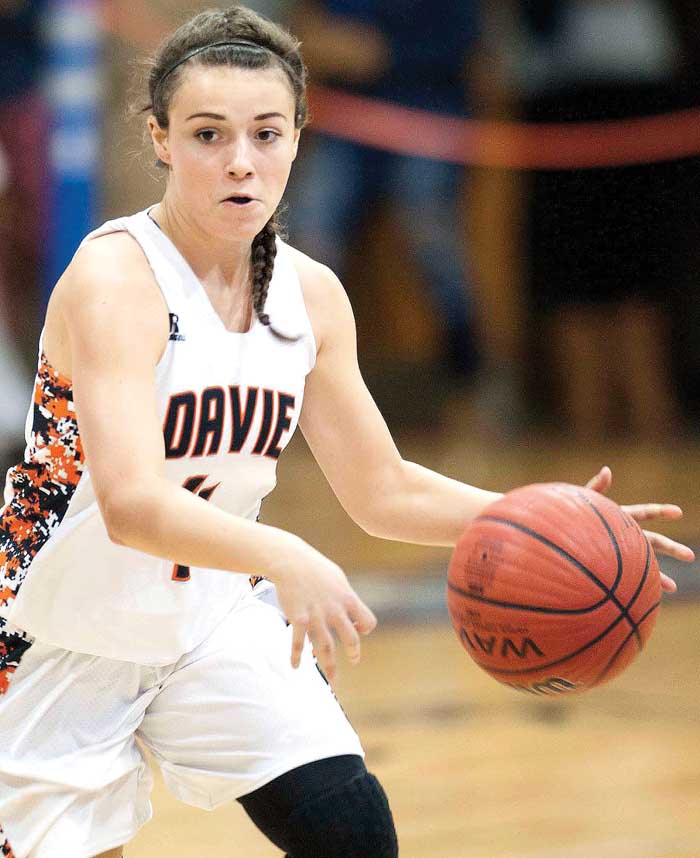 Liz Crenshaw looks for an opening.

SALISBURY – In the consolation round of the Sam Moir Christmas Classic at Catawba College on Dec. 29, the Davie varsity girls basketball team had a player come through with 18 points. But it wasn’t the player you would expect. It wasn’t Ashlyn Hampton. It wasn’t Madison Zaferatos.

It was Caitlyn Peebles.

Davie’s offense needed more balance after Zaferatos and Hampton accounted for 80 percent of the scoring in a 49-44, first-round loss to North Rowan the day before. Peebles’ outburst sent Davie to a 63-46 win over South Rowan.

It was a do-it-all game for Peebles, who scored 18 points on 6-of-9 shooting. She grabbed eight rebounds and made three steals. The previous scoring high for the fourth-year varsity player was 10 from a win over Central Davidson on Dec. 4. The senior entered with a 5.3 average.

“One of the things we really needed to accomplish was to find scoring beyond Madi (Zaferatos) and Ashlyn,” said Coach Dave Continued From Page B1

Ruemenapp. “Caitlyn hit jump shots. She rebounded very well. She was crazy on the boards. I just think she came out with more energy than everybody else for this game.”

Fifth-seeded Davie came out less than inspired and never really put it all together against an overmatched opponent that fell to 2-10.  It trailed 13-8 after the first quarter.

“We had our sights set on playing on the other side of the bracket and not the consolation side,” Ruemenapp said. “But we righted the ship.”

Zaferatos hit all three of her 3-pointers in the second quarter, fueling a 20-6 run that produced a 28-19 halftime lead.

“We started to play better defense,” Ruemenapp said. “We increased the intensity, and that helped get things moving in the right direction.”

The War Eagles pushed the lead to 42-29 in the third. South fought back to 52-46 with 2:36 to go. They didn’t let the Raiders get any closer, though, ending the game with 11 unanswered points from the combination of Hampton, C. Peebles, Patterson Jones and Morgan Lewis.