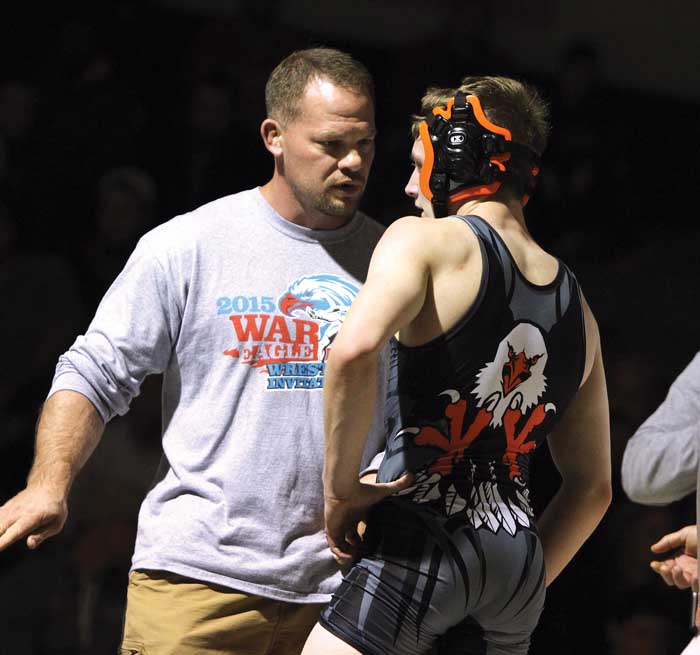 Davie’s wrestling team experienced flashbacks in the Tab Thacker Memorial at West Forsyth. Six days after the Titans punished Davie on its home mat, the War Eagles watched a West tidal wave in the 11-team Thacker tournament on Dec. 23.

A year ago in the same tournament, Davie finished first out of 18 teams, edging West by one point. But West looks unstoppable this winter.

“We didn’t wrestle bad,” Lowery said. “We didn’t have (a 160-pounder) and we lost a couple close ones. For the most part, I think we wrestled about like we were supposed to.”

While Smith sandwiched a pin and a major decision around the injury default, Davie got runner-up performances from Isaiah Olmedo at 182, Jesse Carter at 195 and Anthony Olmedo at 285. Carter reached the finals with back-to-back pins.

I. Olmedo won by pin and by decision to reach the finals with a 33-0 record. The best start in 14 years was stopped by Glenn’s Jonathan Pazcual, who denied Olmedo 5-3. The last War Eagle to go this deep with a perfect record was Patrick Lowery, who went 38-0 and won the state at 215 in 2001-02.

“I thought Isaiah was better than (Pazcual),” Lowery said. “He just messed around. He just wasn’t himself. I guess you have those days every now and then. He’s going to get opportunities (to avenge the loss) since Glenn is in our regional.”

A. Olmedo advanced to the finals with a pair of decisions. The 7-3 loss to West’s Elvis Banks was actually a nice step forward for Olmedo, who was pinned in 22 seconds when they met at Davie on Dec. 17.

“Anthony got put on his back in the first (period),” Lowery said. “He’s getting better. He’s just got to get to the point where he doesn’t worry if somebody gets a takedown on him.”

By rule, you can not wrestle more than 55 matches through the conference tournament, and the Central Piedmont Conference Tournament is still a month away (Jan. 30).

“Shoot, we’re going to have to start sitting some people in some tournaments so they don’t go over 55,” Lowery said.

Despite having just eight wrestlers, Davie’s junior varsity made a strong showing in a tournament at Reynolds on Dec. 21, finishing third out of 12-plus teams.