Harold Frank: A hero to France 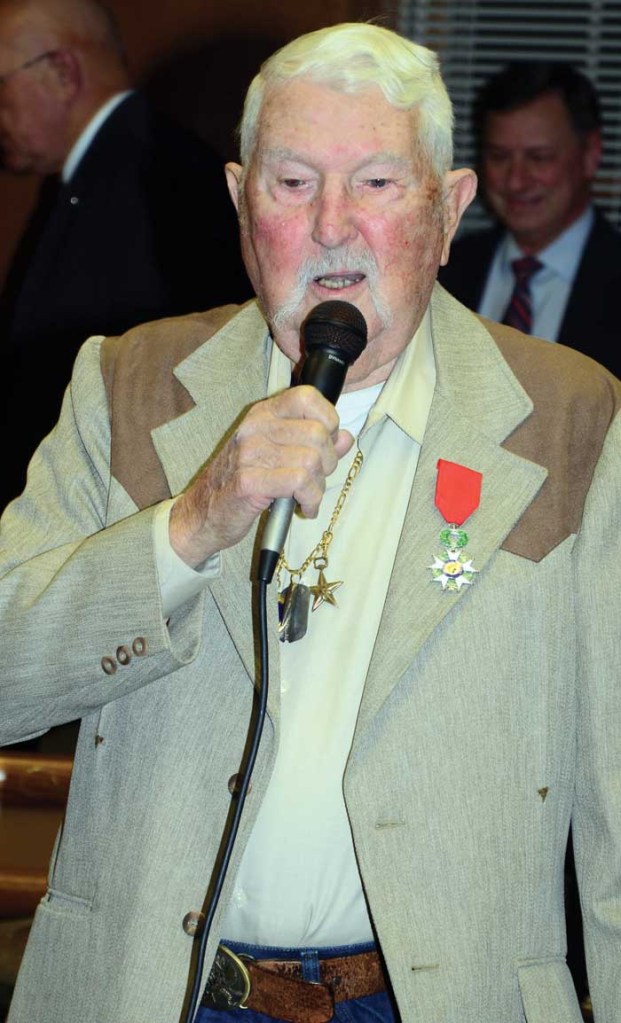 The people of France think otherwise.

On Veterans Day, Frank, 91 and a former prisoner of war in Germany, was named to the Legion of Honor by France, presented by Denis Barbet, counsel general of France to the U.S. Southeast, at a ceremony in Charlotte.

Frank was captured by German soldiers in France, while going behind the enemy lines to get information.

Last week, he was congratulated by county commissioners.

“I’m the luckiest man in the world,” Frank told commissioners.

He made it home, and credits mind over body.

“You’d be amazed of what your brain and thoughts will do to you. Some of them boys (fellow prisoners of war) starved to death because they always thought about it … went to bed thinking they’re going to starve to death – and they did.”

Frank had another plan.

“I didn’t quit. I wanted to come home to see my momma and daddy, my brothers and sisters.” His advice: “Don’t ever give up. No matter how bad it gets, don’t quit.”

Frank still wears the bullet that went into his shoulder when he was captured, and his dog tags. He apologized for missing Davie’s Veterans Day celebration, the first he had missed.

He also offered those at the meeting some of his opinions on gun control and the government. He praised the work of Gen. George Patton.

“We need a Patton now,” he said. “They let us fight in World War II to win it, not to keep it going. Talk to the people in Washington, I don’t care what party they belong to, we’re all Americans. I appreciate freedom because I know what I lost.

“God bless you, and God bless the United States of America. We’ve got stuff ain’t nobody else got and we want to keep it.”

The France National Order of the Legion of Honor is the highest conferred upon a French or foreign national, created by Napoleon Bonaparte in 1802. U.S. veterans had to have helped liberate France.