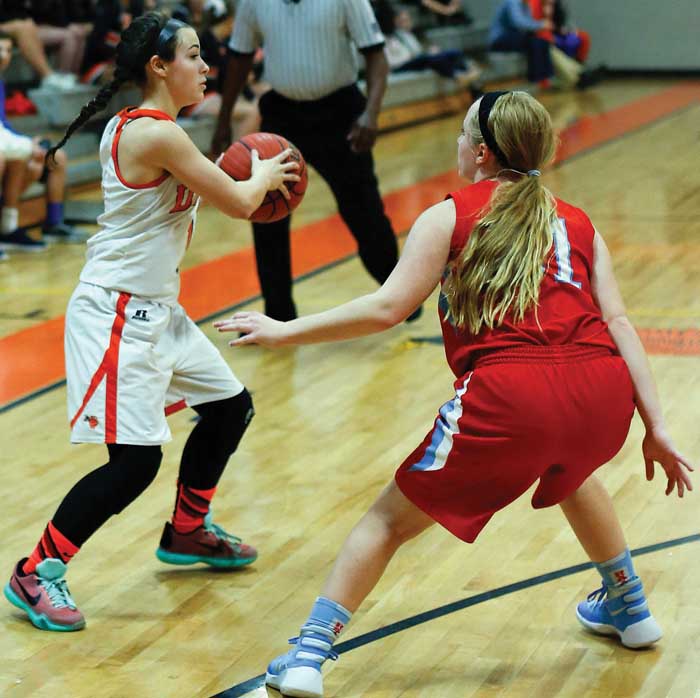 Davie’s varsity girls basketball team came excruciatingly close to ending a long losing streak to Reynolds, getting three clean looks from 3-point range in the final two minutes but missing each one and losing 46-41 on the road in the Central Piedmont Conference opener on Dec. 11.

“I was not at all disappointed with the shots we got,” coach Dave Ruemenapp said. “I just think we kind of felt the pressure of the moment.”

Davie had a slim 21-20 halftime lead, but it began to pull away in the third.

“We came out with a purpose after halftime,” he said. “Patterson Jones hit a nice jumper (in the fourth) that stretched the lead to seven. We gutted one out.”

The biggest reasons for the win: Madison Zaferatos and Ashlyn Hampton. Zaferatos scored a season-high 23 points on 6-of-14 field goals and 10-of-13 foul shooting. It marked the fourth 20-point effort of her four-year varsity career. Hampton had 16 points and six blocks while converting 8 of 10 foul shots. It was her fifth straight game with 16-plus points.

Emma Slabach had nine points. Caitlyn Peebles had five points and seven rebounds. Jones had four points as Davie hit an impressive 79 percent from the line (22 of 28).

“Madi got on a good run and made a bunch of free throws,” he said. “That made the difference. They tried to press us at the end, and she did a good job of controlling that. She was able to get to the basket, hit layups and get fouled.”

On the road on Friday, the War Eagles flirted with the first win over Reynolds in years, only to fall short 46-41 in the CPC opener.

Zaferatos burned Reynolds early, hitting three 3s in the first quarter and popping her fourth trey early in the second to power Davie to a 19-10 lead. She did not, however, hit another field goal.

“Madi came out on fire,” Ruemenapp said. “We handled their press. We moved the ball around. We did all the things we were supposed to do.”

The Demons cut the margin to 25-20 by halftime. Amari Cuthbertson went for 13 of her game-high 19 points in the third, when Reynolds charged to a 37-34 lead. One of her baskets was an unlucky break for Davie – a banked 3 from the left wing.

“I told them the longer we were ahead, the more their (defensive) pressure was going to intensify and the tougher the looks were going to come,” Ruemenapp said.

Hampton did everything she could to save Davie in a thrilling fourth, hitting all three of Davie’s field goals in the final eight minutes.

With Davie down by six, Jones passed inside to Hampton, who made a tough kiss off the glass to make it 44-40 with 1:35 to go. Zaferatos hit a free throw to make it a one-possession game, 44-41, with 35 seconds remaining. Davie had to foul, and Reynolds cooperated, missing the front end of a 1-and-1. Hampton rebounded the miss with 11.9 seconds left. With three seconds left, Davie missed an open 3-pointer from the left wing.

Reynolds was a juggernaut last year, winning the league and beating Davie by 34 and 40 points. It held on to beat Davie for the 17th straight time.

“We (followed the game plan) pretty much throughout the game,” Ruemenapp said. “We just had lapses. That’s what pressing teams try to do to you.”

Reynolds’ star, Tierra Wilson, hit three 3s for 15 points. “They stopped the game and gave her a ball for scoring 1,000 (career) points – and she’s a junior,” Ruemenapp said in amazement. “So she’s really solid.”

It’s been an injury-marred season so far for the War Eagles, who only went six deep in the rotation. Hampton shot 7-of-10 to score 16 points. Zaferatos hit 4-of-6 3s for 13 points and added five assists. Peebles had nine points and Slabach three.

“Ashlyn knew she was the best post player on the floor again,” he said. “We told her when she caught it in those press opportunities to find a way to get to the basket. She scored on just about each one of those.”