Boys run out of juice at Reynolds 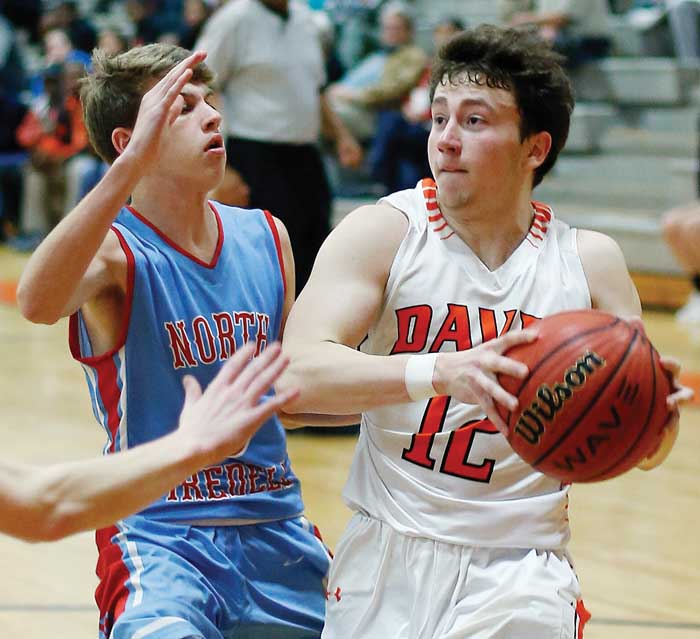 Davie’s varsity boys basketball team defeated North Iredell and West Rowan to post the longest winning streak (five) in three years. Although the War Eagles lost the Central Piedmont Conference opener at Reynolds, they threw a ton of counter punches and led at halftime in a performance that spoke volumes about their improvement from last year, when they finished 7-16 and 1-11 in the CPC.

“To compete against that level of a team as hard as we did, yeah, there’s a lot more positives than negatives,” coach Mike Absher said following a 17-point loss.

Cooper Wall, Nic Starnes and Jordan McDaniel entered the home game against North Iredell on Dec. 7 averaging 40.6 points between them. The trio combined for 22 against N. Iredell, and Davie won anyway.

“The great thing about us now is a handful of guys can pick us up on any night,” Absher said. “It’s nice to have different people who can step up a different times.”

Trailing 50-46 in the third, Davie turned the game with a 7-0 run to close the quarter. Mua scored inside, Walton buried a 3-pointer and Slabach pump faked from the arc and drove the baseline to give Davie a 53-50 lead.

It was 62-62 with 1:17 to go. Davie regained control from there and avenged a 70-54 loss from last year. Heiner got an offensive rebound, drew a foul and hit both free throws for a 64-62 lead. After Mua grabbed a defensive board, Heiner broke the press, drove the lane and dished to Slabach, who completed a three-point play. Wall salted it away, hitting two free throws for a 69-64 lead with 27 seconds remaining.

“I’ve seen Heiner do that in practice, so it wasn’t surprising,” Absher said of his drive and dish. “He knows when to attack, and that was a good time to do it.”

Davie’s fast-paced offense was blistering in the first half, thanks to Slabach’s outside stroke and Starnes’ passing. Slabach went for 15 first-half points as the half ended with Davie ahead 45-35.

Slabach settled for 17 points. It was his third straight outing with 17 or more. Mua matched a career high with 16 points on 5-of-7 shooting, and he added nine rebounds. Starnes had a double-double with 13 points and 10 assists. Wall had 11 points and Walton eight. McDaniel contributed eight rebounds and three assists. Heiner had seven boards.

“Slabach’s going to become known on scouting reports,” Absher said. “I would have loved to have kept the pace we had offensively throughout the game. We’re at our best when we’re running the ball down the floor. Starnes is unreal pushing the ball. Wow, that was great offense.”

When Wall found Starnes for a 3-pointer in the fourth quarter, Davie had a 65-56 lead and was threatening to blow it open. But West answered with an 8-0 run. It was tight until the final 20 seconds.

Heiner didn’t have his best night, but he had a mean finish. His offensive rebound led to a foul, and his free throw gave Davie a 72-70 lead. Then Heiner made the defensive play of the game, blocking a shot attempt deep in the paint. Then he grabbed the ball and triggered a fast break, passing ahead to Wall, who threw ahead to Mua for a dunk and a 74-70 lead with 40 seconds left.

“You’ve got to give Cory a lot of credit,” Absher said. “He didn’t feel like he played well, but that was a big play. He also had two huge defensive rebounds.”

West hit two free throws with 33 seconds remaining, cutting Davie’s lead to 74-72. West had Wall smothered near halfcourt, but he split the double-team, sliced to the lane and assisted a basket by Heiner, making it 76-72 with 20 seconds on the clock. That was ballgame.

Davie improved to 5-1 and ended a three-game losing streak in the series. The teams didn’t play last year. In 2013-14, West swept three from Davie.

Facing Reynolds on the road on Dec. 11, this was the first major test in a CPC season that promises to offer plenty of them. The War Eagles played admirably against an excellent team for a half, leading 37-34 at intermission before losing 74-57.

The Demons remained perfect at 6-0.

In the first half, you felt a corner had been turned. McDaniel hit a 3 to give Davie a 31-27 lead. Starnes drove for an and-one to make it 35-29. When Wall threw a long pass to a streaking Heiner, it was 37-29 and the home fans were stunned.

“We really competed hard,” Absher said. “Maybe we ran out of juice.”

Reynolds surged in front in the third, but the margin was single digits going into the fourth. Starnes went coast to coast to cut Reynolds’ lead to 44-42. Then Starnes hit from the outside to cut it to 46-44. Three different Demons hit 3s during one stretch. McDaniel answered with a deep 3 to shave the margin to 51-47. Starnes made a 3 to pull Davie within 57-50.

Davie hit a wall in the fourth, though, getting outscored 15-7 and losing to Reynolds for the fifth time in a row. Starnes finished with 16 points, followed by McDaniel with 12 and Heiner and Mua with six each.

“Some shots we had been making didn’t go in,” Absher said. “There were a ton of 50-50 balls that we didn’t get. I still love our offense. We didn’t score many points in the second half, but the way we’re sharing the ball, pushing it and getting up and down the floor is really going to be our trademark. We’ve just got to stay with it.”

Reynolds’ size and perimeter shooting gave Davie problems, as expected. Its outside game turned out to be the bigger problem.

“We tried to take their size away first,” he said. “But then they made enough 3s that it made it really, really hard to defend – because then everything in the post was 1-on-1 and we just really don’t have the size to be able to guard them like that.”