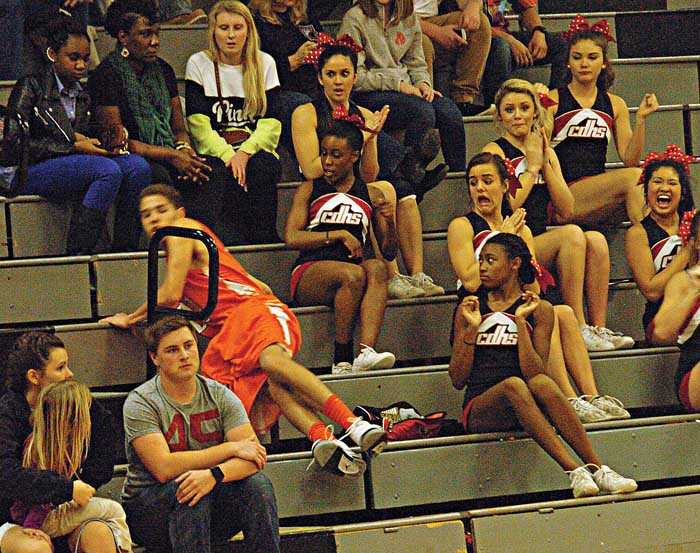 Corey Heiner ends up in the stands after going for a loose ball.

Cooper Wall’s four-point play was the backbreaker as Davie’s varsity boys basketball team pulled away in the fourth quarter for a 72-60 home win over Alexander Central on Dec. 1.

Davie’s 3-point marksmanship, especially from Heath Slabach, and another defensive gem from Heiner defined an 83-61 blowout of Central Davidson in Davie’s gym on Dec. 4.

Yep, all the pieces fell into place as Davie won three games in four days to lift its record to 3-1.

Against Alexander Central, the War Eagles were playing their first game in 12 days and facing a team that beat them by 15 last year and by 14 in 2013-14.

When the Cougars scored the first five points in the fourth quarter to cut Davie’s lead to 52-51, it looked as if the outcome was headed to the wire. But Central’s momentum lasted only a few seconds. With Starnes, Wall, Jordan McDaniel, Heiner and L.P. Mua on the floor down the stretch, the War Eagles responded with a game-closing 20-9 run to win 72-60.

“That showed a lot of mental toughness on our part,” coach Mike Absher said. “We never panicked.”

Wall fired a 3-pointer from the corner. He was knocked to the floor. The shot swished. Then he converted the free throw, the four-point play driving a stake through AC’s heart and pushing Davie’s lead to 60-52.

“That’s one of our better inbound plays,” Absher said. “We ran it perfect and Cooper made a big shot. No question, that was a turning point in the game.”

If the Cougars had anything left after Wall’s shot, they didn’t when McDaniel buried a 3 from the other corner with 1:18 left. That made it 66-57.

“It was one of those … yeah, great shot,” Absher said. “He shot with confidence.”

“I’d love to play with Starnes because he sees the floor, and he’ll hit you when you’re open,” Absher said.

Facing Central Davidson on the road in the first of two matchups in three days, Davie showed resolve in a 73-72 nail-biter.

Central shooter Connor Jarvis took Davie to school in the first quarter, scoring 15 points and putting the War Eagles in a 23-10 hole. Absher regrouped, rotating Heiner, McDaniel and Brandon Horton on Jarvis. Heiner was the primary defender. He stuck to Jarvis like a 39-dollar suit. The result: Jarvis didn’t hit another field goal. He hit three free throws to finish with 18 points.

“They were shooting the lights out and we went to a box-and-one and a triangle-and-two,” Absher said. “In the second half, Heiner had (Jarvis) the entire time.”

Central’s JaQuan Dawson came off the bench for 10 points in the second quarter, and the Spartans held a 43-33 lead at the half.

“His physical strength to take the contact and get the ball to go in (on the and-one) … he’s just a tough competitor mentally,” Absher said. “Two other big plays were L.P.’s offensive rebounds on those missed free throws.”

Davie had a 71-70 lead with 1:09 remaining, but it turned it over. Central hit two free throws for a 72-71 lead. When Davie missed a shot and Central controlled the rebound, Davie was in trouble. But Wall inspired roars from the visitors’ crowd by getting a steal at halfcourt and driving hard to the hole. The whistle blew. The call was a blocking foul. Wall swished both free throws to give Davie the 73-72 lead with 29 seconds on the clock.

After Davie missed the front end of a one-and-one, CD called timeout with 15 seconds left. Jarvis got an open look from the left wing. Wall ran at him and the shot missed as the horn sounded.

The rematch against Central Davidson at Davie on Dec. 4 went better than Absher could have scripted. Davie rolled 83-61 as it delivered breathtaking shooting from beyond the arc.

The War Eagles nailed nine 3-pointers in the first half, resulting in a 44-30 halftime lead. After failing to score at Central, Slabach came out on fire. In the first half, Slabach hit four 3s. Will Shepherd, who hadn’t scored all year, jumped off the bench and banged a pair of 3s. Freshman Michael Walton, who had two points at Central, connected twice from downtown.

“We said the first four minutes were going to be the biggest part of the game, and we came out with a lot of energy,” Absher said. “Slabach’s start was huge in that. He was probably not a high priority (on their scouting report). I really think we have a good shooting team. We have practiced the heck out of it, especially in the offseason. We’ve all been kind of waiting for that one night when we make a bunch.”

Ten seconds into the second half, McDaniel hit a 3 from NBA range. Later in the third, he hit Davie’s 11th and final 3, and the margin grew to 73-49.

“We’ve got other guys who can come in and contribute,” he said. “Boy, did they hold true to that.”

Meanwhile, Heiner did more splendid work on Jarvis, who scored just eight points. He had one point at halftime. He only managed two when guarded by Heiner, whose relentlessness is infectious. Oh, there’s also this: In the game at Central, he dove to the fourth row to save a ball. And this: In the home game against C. Davidson, play was stopped due to a wet spot on the floor. Heiner grabbed a towel and wiped it up. Afterward, he probably washed the uniforms.

“That’s not who guards you at Catawba College,” Absher praised. “He’s got more energy than the Energizer Bunny.”