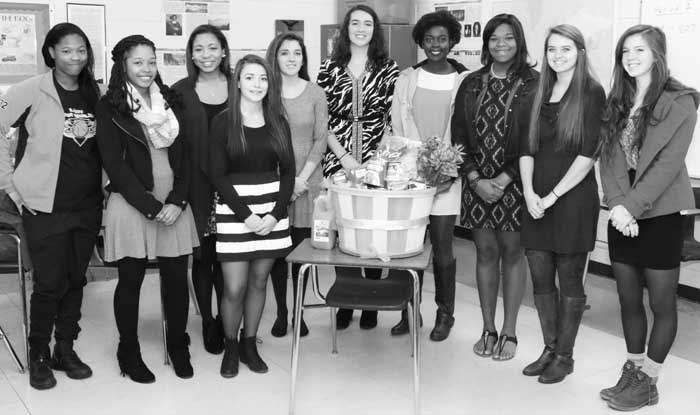 The Davie High girls varsity basketball team put together this gift basket for a deserving family.

Late in the 2014-15 regular season when the War Eagles toppled Tabor to clinch second place and the best Central Piedmont Conference finish in 10 years, they stopped a 21-game losing streak to the Spartans.

In the first round of the 27th-annual Mary Garber Holiday Tipoff Classic at Glenn on Nov. 21, the War Eagles beat Tabor 43-34 to improve their record to 2-0.

The Garber tournament was divided into two brackets – the Champions bracket and the Pepsi bracket. Fifth-seeded Davie was in the Pepsi bracket with No. 1 Winston-Salem Prep, No. 2 Reynolds, No. 3 Atkins, No. 4 Tabor, No. 6 West Forsyth and No. 7 Glenn.

It was hardly the prettiest win in coach Dave Ruemenapp’s three years at Davie, but any win over Tabor is a quality win. Davie led 20-12 after the first quarter, 26-19 at halftime and 34-22 after three.

“It was sloppy,” Ruemenapp said. “We turned it over a bunch and missed a bunch of easy shots. And they did the same thing. We had a lead the vast majority of the game, but I never felt comfortable. We had a bunch of chances to stretch it out, but man, we had two or three 3s that completely circled and bounced out. We missed too many free throws. The score was stuck at 27-22 for a long time. We finally got a bucket or two and spread it a little bit so I could at least start breathing again.”

Center Ashlyn Hampton had 13 points, 13 rebounds and five steals as the junior opened the season with back-to-back double-doubles. But she “could have had a much bigger night (scoring), and I think she knows that,” he said.

“They really did a good job keying on Madi, and it disrupted a lot of the flow of how we usually play,” he said. “I mean Madi’s not a secret anymore. She’s been doing this for a long time now.”

Caitlyn Peebles was solid with eight points and five rebounds. When Peebles and Hampton got in foul trouble, Davie got a lift from Cameron Tabor. Emma Slabach played at less than 100 percent, but she contributed six points by hitting 2-of-5 3-pointers.

“We got some key moments from Peebles that really helped,” he said. “Peebles and Hampton were in foul trouble a little bit, and Cameron came off the bench and gave us some solid minutes to let us get through it.”

In the semifinals at Glenn on Nov. 23, the War Eagles walked into a buzz saw, losing 52-39 to top-seeded Winston-Salem Prep. The Phoenix built a 48-28 lead in the third. As the defending 1-A state champions, they can have that effect on people.

Last year they went 24-3 and won their playoff games by an average of 30-plus points. They won it all without their top post player, Kristen Saunders, who missed all the playoff games with a broken foot but is back this year. In fact, all nine players are back, including two signees to East Tennessee State and East Carolina.

“Not only do we have everybody returning from last year, but our biggest post player missed the entire playoff run,” Prep coach Eugene Love told the Winston-Salem Journal as his team opened its season against Davie. “So now we are bringing everyone back, but have even more depth than we had last year.”

Hampton hit eight of 10 free throws to score 14 points to go with eight rebounds. Zaferatos nailed 4-of-6 3s to score 13. Sha’veh Martinez, Peebles and Patterson Jones had four each.

Seventh-seeded Glenn made a surprise appearance in the championship game. To no one’s surprise, the Phoenix pummelled Glenn 71-44.