Free holiday events at The Brock 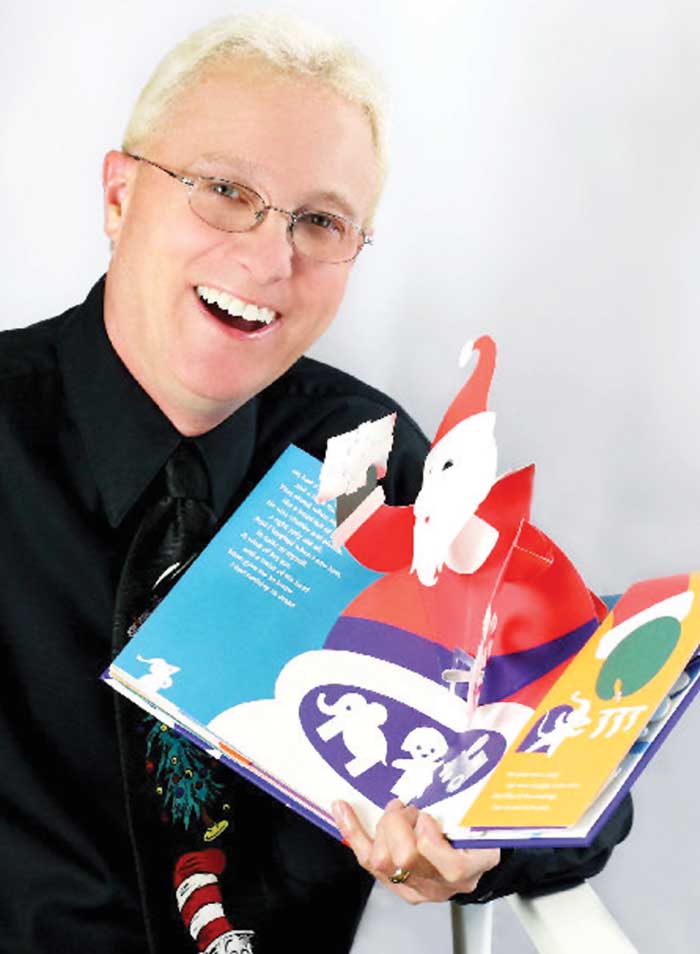 Mark Daniel will share his love of magic and reading Saturday.

A free two-day event has been planned by the Davie County Arts Council for the community to enjoy.

It starts off with a who’s who of talent on Friday, Dec. 4 at 7:30 p.m. with an evening filled with the sounds of Christmas being presented by the following musicians.

The First United Methodist Hand Bell Choir was formed in 1988 with their then new director, Barbara Basham. The bells were purchased several years before, but put away when there were no ringers.  Since that time, there has been a substantial core group of dedicated ringers who have kept the choir together.

The group has played at the Greenbrier Resort in West Virginia four times, and for many community events, as well as at their home church.

This year they will again provide the 30-minute prelude, as they have done for many years at First Baptist Church during the Love Feast on the first Sunday evening of December.

Eric Powell will sing  many favorite songs. He grew up in Davie County, is a sophomore vocal performance major at the University of North Carolina School of the Arts.

He is a member of the UNCSA Cantata Singers and has performed such repertoire as Haydn’s Lord Nelson, Orff’s Carmina Burana, and Bach’s Magnificat.  He is the baritone section leader and soloist at First United Methodist Church in Salisbury and frequently performs there with members of the Winston- Salem Symphony Orchestra.

Aaron Prillaman is a

classical guitarist living in Mocksville, will play such songs as “Greensleeves” and “On This Day.” He is pursuing a doctorate of musical arts in guitar performance with Frank Koonce at Arizona State University. He has appeared in numerous recitals, concerts, musicals, and other public performances.

Prillaman has been playing guitar for 18 years. He began his formal musical studies at Appalachian State University under the instruction of Dr. Douglas James. After completing a bachelor’s of music in guitar performance, he was accepted into the master’s program at East Carolina University where he studied with Dr. Elliot Frank. He was chosen to be a graduate assistant in the guitar department at ECU, where he taught classes including functional guitar, beginner guitar, and applied guitar.

After completing his master’s, he moved to Arizona to complete the residency requirement for his doctorate. While there he served as a worship leader at Tempe First United Methodist Church. In 2013, he served as an artist in residence for the Shonto Artist’s project in the Navajo Nation. He is serving as a worship leader on the staff at First United Methodist Church of Gastonia.

Leonard Rowe, baritone, is a native of Fredericksburg, Va. and a graduate of N.C. School of the Arts. He performed the title role in the 75th Anniversary National Tour of Porgy and Bess, with shows in more than 25 cities.

He performed with the New York City Opera in Margaret Garner by Richard Danielpour and Toni Morrison. Later that season he performed with the Israel Kibbutz Orchestra in Tel Aviv and the Omaha Symphony. He performed the title role in Porgy and Bess in Amsterdam, Antwerp, Hamburg, Zurich and the Festspielhaus in Baden-Baden.

The baritone sang with Peter Nero and the Philly Pops at the Mann Center in Philadelphia and the Buffalo Philharmonic. He sang with the Augusta Symphony performing opera favorites and reprised “Robert Garner” with the Michigan Opera Theater in Margaret Garner with Denyce Graves in the title role.

The baritone’s seasons took him all over the globe.  He sang the title role in Porgy and Bess at the Cape Town Opera in South Africa and with the Michigan Opera Theater in Detroit.  Singing certain versions of Porgy and Bess with the Israel Kibbutz Orchestra in Tel Aviv, and in other cities throughout Israel, was a highlight of some of his seasons, as well as singing the title role of the rarely heard opera Koagna by Delius at the Sadler’s Wells Theatre in London. That season also included two performances with the Buffalo Philharmonic, one with Peter Nero on the Pops series and the other, Beethoven’s 9th, with the Mansfield Symphony.  Performances of the title role in Porgy and Bes, in Malmo, Sweden, ended that season.

He sang the role of “Jake” on the World Premiere Recording of the Original 1935 Production of Porgy and Bess on the Decca Label released in 2006. He has performed with symphonies across the nation, including singing solo.

A winner of two competitions–Licia Albanese/Puccini Foundation and the Bellini International Voice Competition–he performed in the winner’s recitals of both competitions at Carnegie Hall and Lincoln Center.

Frank Voltz will be playing his harp. Voltz began playing the piano at age 7 and graduated with a bachelor’s degree in piano performance from Kent State University, Ohio. He has been accompanist for The Ohio Ballet, Atlanta Ballet, Pittsburgh Ballet Theatre, Alvin Ailey American Dance Theatre in New York City and The Joffrey Ballet, also in New York City.  While working with Pittsburgh Ballet Theatre, he was Assistant Ballet Conductor of the Pittsburgh Symphony under Andre Previn.

He began playing the organ in church at age 11. He has performed organ recitals around the country and has performed on the original The Hour of Power at the Crystal Cathedral in Garden Grove, Calif. He was organist for the National Christian Choir (NCC) in Washington, D.C. for four years.  In 2014, he presented a solo concert, Christmas at the Coleman, on harp, piano, and The Mighty Wurlitzer pipe organ (circa 1928) at the Coleman Theatre in Miami, Okla.

For the past 15 years, he has been guest clinician and performing artist at harp festivals and conferences throughout the United States and Canada. Since moving to Winston-Salem in 2009, he has performed with the Winston-Salem Symphony, Greensboro Symphony, and the Piedmont Wind Symphony.

He has recorded four harp CDs and two piano CDs.  As a gospel jazz harpist, he performs in churches all over the country. As a jazz harpist, he has performed on rock, jazz, gospel, new age, folk, Christmas and sacred recording projects for artists.  He has published more than 80 hymn arrangements, ensemble arrangements, and original compositions for pedal and lever harp through his music publishing company, Chiera Music (www.frankvoltz.com). His music has been recorded by other harpists around the world.

He is on the board of directors for the Piedmont Chapter of the American Harp Society.

On Saturday, Dec. 5 the free “Celebration of Christmas at the Brock” continues from 10 a.m.-3 p.m.

The line-up is geared to children and adults.

Santa and Mrs. Claus will be in the front lobby from 10  a.m.-noon.  One Shot Photography will take photos of those moments with Santa (No cell or camera photography of your child’s visit with Santa.).

At 10:30 a.m., Santa’s Elf (Sandra Vance) will tell those in the theatre a new version of “Twas the Night Before Christmas.”

Amelia Bedilia (Pauline Bostian) will tell a story of one of her “crazy” Christmas memory at 11:15. Everyone will want to be on board while the conductor of “Polar Express” takes on a trip to the North Pole (Bill Campbell) at noon.

Join Magical Storyteller Mark Daniel, Wallie the rabbit, and a little snowman in a joyous program for the holidays with storytelling, booktalking, magic tricks (illusions), puppetry and audience participation of “JoyfullyChristmas” at 1 p.m. in the theatre.

There will be an indoor snowstorm, music, and surprises. Imagine if you mixed a bit of folksiness, whimsy, and magic, with somebody who loves books, then shook it all up a bit – out would come Mark Daniel, an exuberant promoter of children’s books.

The Mocksville native has been a special guest to schools, libraries, and literacy and storytelling festivals throughout the Eastern United States, visiting with millions of kids. The thousands of visits started modestly at the Davie County Library in where a children’s librarian, Olivia Husk, took an interest in a young Mark supplying him for years with a treasure trove of books.  He was invited and has performed at The White House for The Easter Egg Roll twice.

Mark and Tami Daniel, are the directors of KIDabra International, an association that twice a year during it’s conferences In Pigeon Forge, Tenn. and Ventura, Calif., attracts hundreds of children’s performers who gather from across the country and many parts of the world for educational seminars and shows.

At 2 p.m. the newly-formed Davie Community Band will present a mini Christmas concert for all ages.

If all of that were not enough to get you in the holiday spirit, the following artists and authors will be throughout the building presenting art and books to make your Christmas shopping easy this year: Pam and Susan Bostian, Linda Fowler, Denise Harrison, Clint Miller, Judith Rush and Bruce White. These authors will be available to discuss their books: Charles Crenshaw, Linda Dean, Tiffany Ehnes and Marie Roth.

Children will be surprised to see that Rudolph the Red Nosed Reindeer (Brittani Mohat), The Grinch (Evan Mang), Frosty the Snowman (Adam Naylor), Santa’s Elf No. 1 (Josslyn Ruiz), and Santa’s Elf No. 2 (Marisol Ruano).  Parents can take photographs of their children with all of these Christmas Characters.