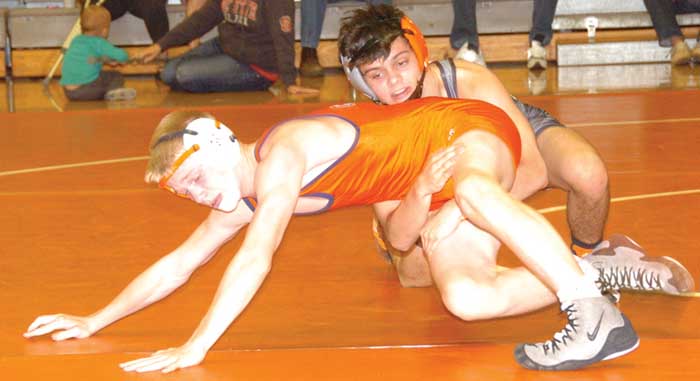 In two wrestling meets last week, Davie did what it mostly always does – it racked up points and wins.

“It’s a good group,” 40th-year coach Buddy Lowery said. “They get along good. I’m not saying we don’t have anything to work on, but they work hard … for the most part.”

In the Indian Duals at St. Stephens on Nov. 24, the War Eagles kept pounding, going 5-0 on the day.

In the third match, Davie pulled out its only close call of the season against St. Stephens. It treated the other four opponents like stress balls, winning 53-15 over Glenn, 77-3 over Reagan, 75-3 over North Iredell and 60-13 over Freedom.

Lowery didn’t want to get overly excited about the 6-0 start. It’s going to be a busy and difficult month.

“We didn’t wrestle bad,” he said. “We’re getting better. Of course, I’d like to wrestle better. All the way through the lineup we’re not bad.” He added that assistants Jason Hooker, Timmy Allen and Mike Dunn deserve considerable credit for the success.

While the War Eagles outscored Glenn, Reagan, North Iredell and Freedom 265-34, they were tested by St. Stephens. The teams split 14 weight classes, but the difference in Davie’s 34-27 victory was its 4-2 edge in pins.

I. Olmedo (decision), Carter (pin), Smith (pin), Whitley (pin) and Strickland (major decision) did their part as Davie had a 25-15 lead with four weight classes to go.

“They’re good,” Lowery said of St. Stephens. “If I get Vandiver in the lineup (he has only wrestled once), we will be better. But Strickland and Merritt were there. Having two of those three, I can live with it I guess. I moved Sigmon up (to 132) and he’s a 125-pounder. But Sigmon has been through the mill.”