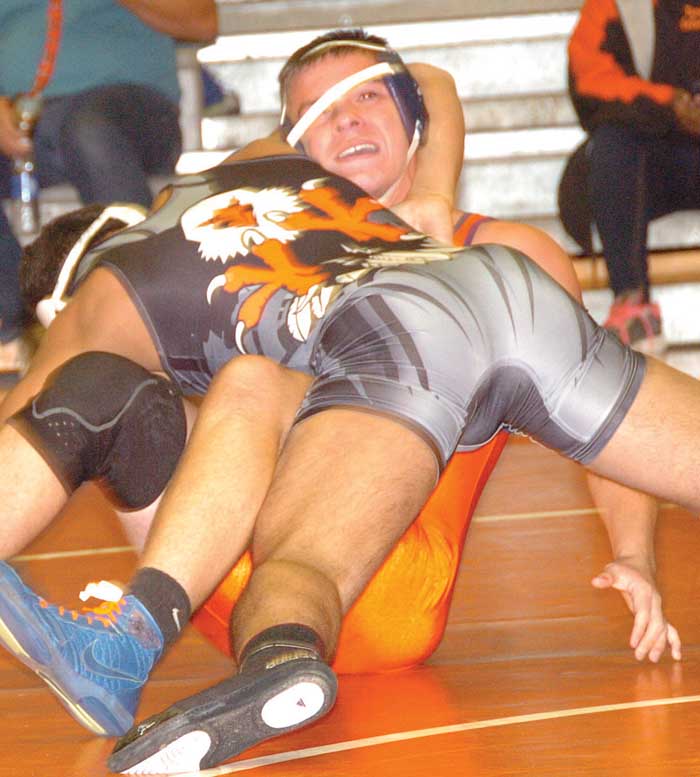 Davie came out like gangbusters. When Josh Shore, Hunter Smith, Isaiah Whitley, Thad Vandiver and Will Allen produced pins and Tommy Trader got a major decision, it was 34-0. Smith’s required 25 seconds. Isaiah Olmedo, Jesse Carter, Jesus Olmedo and Anthony Olmedo had pins later in the evening.

Allen, who is in his first year of coaching at his alma mater, has 27 JV wrestlers. “That’s probably as many as we’ve had in a long time, so that’s good,” he said.

It’s incredibly unique to have three brothers on the same team. Isaiah Olmedo is a senior who is a fourth-year member of the varsity. He has two little brothers as teammates, but they’re not so little. Jesus and Anthony are freshmen at 220 and 260 pounds, respectively.

While Isaiah’s pin at 182 improved his varsity career record to 63-31, his twin brothers had strong debuts with pins at 220 and heavyweight.

“It’s awesome to see them excel so much in the past few years,” Isaiah said. “They’re way better than I was when I was a freshman (with a 3-7 record), and I’m glad to see that they’re going to do great things.”

Jesus and Anthony are blue-chippers in two sports. They look as though they could run through a brick wall. They were starters on the junior-varsity defensive line in football and will compete for varsity spots next fall. In two years at North Davie Middle, they went a combined 50-4 on the mat.

Isaiah is a role model for the twins, but in turn they help fuel his passion for getting better.

“I have (mentored) them, but at the same time they have helped me a lot,” Isaiah said. “They always keep me going and they make sure I don’t fall off.”

When asked about Jesus’ pin, Isaiah said: “He really surprised me. He was running good stuff. It was always forward pressure and grinding.”

Isaiah can be a tough critic, too. “Anthony needs a little bit of work. He just hasn’t figured it out yet. He’s new. He’s more of a freshman. Jesus has got it figured out. Anthony did good, but I’m used to seeing him do a little better.”

Since Anthony is about 80 pounds heavier than Isaiah, they don’t pair up at practice. But Isaiah and Jesus push each other relentlessly every day in the practice room.

“Jesus and me go at it,” he said. “He rarely (gets the best of me), but he does every now and then. Oh my gosh, we’re about to rip each other’s heads off all the time. We get over it. Right after practice is over, it’s back to normal. We’ll talk about how we did  and I’ll tell him he did good and what he messed up on. He’ll tell me what I did good and what I messed up on.”