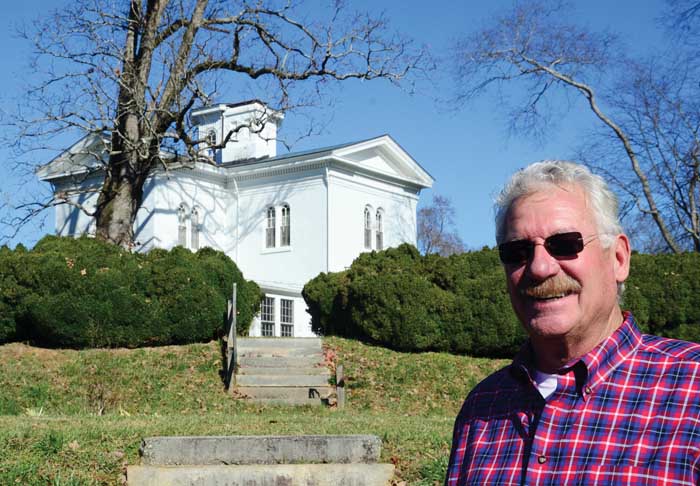 Spurgeon Foster is still taking in the family's purchase of the Cooleemee Plantation and more than 2,000 acres.

For the first time since 1817, the name “Hairston” does not appear on a deed as an owner of the Cooleemee Plantation.

It was sold – some 2,033 acres including the plantation house, a more modern house and other structures – to Spurgeon H. Foster Jr. and wife Sherry M. Foster of Mocksville and their companies for approximately $8.1 million. The sale was made final Nov. 9, but has been in the works for years.

Foster, a farmer, is familiar with the land. He’s leased farmland there since 1970, more from the Hairstons in Davidson County.

Because the property is tied to an agreement with The Land Trust of Central North Carolina, development is limited. That’s fine with Foster, who plans to continue farming on the property, maybe expand the farmland.

He said he had been talking to Peter Hairston Jr. about buying the crop land for six or seven years. At a meeting more recently, Hairston suggested he buy it all.

The dust hasn’t even settled on the deed, and Foster is getting plenty of ideas of how to best preserve and use the plantation house. The structure is in great shape, with most of the details still intact. A final decision on how the house will be used is a while away; all of Hairston’s belongings haven’t been moved.

A couple of dead trees will be removed. The boxwoods, planted in the mid-1800s, need some attention.

“Our main plan is to keep it as it is, and maybe restore the older buildings for people to see,” Foster said.

For now, the caretakers who live on the site will stay, in part to take care of the property and in part to keep sightseers at bay.

Foster said his family has mixed feelings about the purchase. It’s a big move for a farming family – even one that has thousands of acres and grain storage facilities across the state.

The Fosters have two sons and six grandchildren.

“The grandchildren, they love it,” Foster said. One granddaughter even said it would be the perfect place for her next tea party. “So, that’s what’s going to happen.” He’s already given her a “key.”

Just getting the land surveyed turned into an ordeal. It hadn’t been surveyed since 1816.

“It called for starting from a rock, then going two miles south to a black gum tree,” Foster said, smiling. Surprisingly, they found that rock. The gum tree, well, that was a different story.

At least 15 acres of the property must be left in a natural state. The site also holds a type of granite known as leopard stone, the only place in North America the stone is found.

For now, Foster is still taking in what his purchase means. He looks at the curved wall, complete with a curved stone foundation. They had to be carved with hand tools.

The walls inside the structure are brick, covered with plaster. The outside brick is covered with stucco. More than 300,000 bricks were used in constructing the plantation house, each made on site.

James Wall, in his book “The History of Davie County,” had this to say about the Cooleemee Plantation.

It started, Wall wrote, when Peter Hairston of Stokes County learned of a plan to make the Yadkin River navigable all the way to the Cape Fear. He paid $20,000 for the 2,300-acre Cooleemee Hill Plantation, owned by Richmond Pearson.

Hairston held on to that hope of making the river navigable because although the land was producing tobacco and cotton and other crops, it was a long way to markets. He was sending tobacco to Lynchburg and Petersburg, Va., a month-long round trip for horses and wagons.

Hairston wrote in 1850: “If these improvements are carried out it may make this part of the country worth living in. As it is, it is almost a misfortune to have any produce to send to market. The expense and trouble of getting it there is so great.”

The plan to make the river navigable failed, but it included towns laid out for the Fork Church area and for the area of The Point where the Yadkin and South Yadkin rivers meet.

Peter Wilson Hairston inherited Cooleemee Hill in 1832. By 1860, he had expanded it to 4,200 acres. The plantation had approximately 300 slaves, and the family was known for treating them well; mainly, because they were needed to keep the farm profitable.

The plantation house, which still stands, made the site more significant. Built from 1853-1855, it was like nothing else in Piedmont North Carolina. It was 50 feet hight with 12 rooms, with an “elegance of design and detail.” It was built in the design of a Greek Cross, and includes a spiral staircase to the second floor and a cupola on the roof.

Although they still owned the property, the Hairston family, after the Civil War, moved to Baltimore, Md., leaving the farm work to overseers. After Peter Wilson Hairston’s death in 1884, his widow returned to the property with her four children, Wall wrote.

Foster is still taking it all in. He finds something new on almost every trip. One thing is for sure, he wants to keep the property rural, and the old buildings restored to where others can enjoy them.