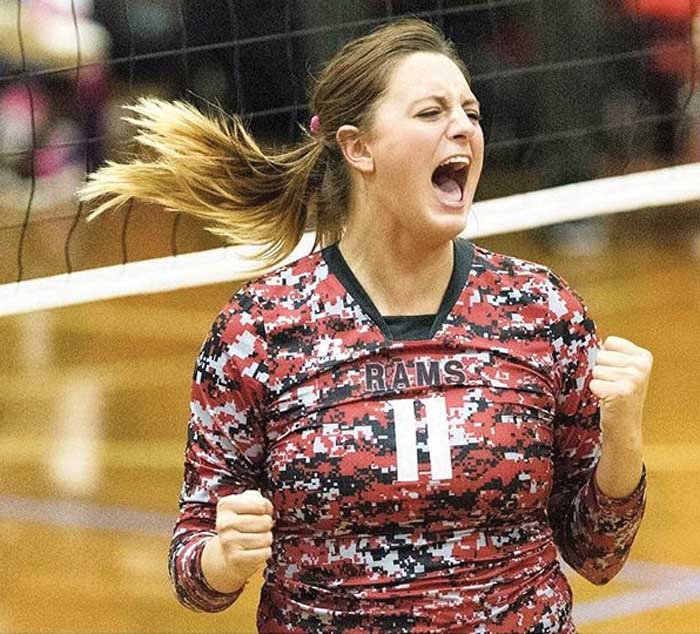 Brittani Stewart and Winston-Salem State’s volleyball team are on a record run as the Rams enter the postseason.

The Rams closed the regular season at 19-7 overall and 15-1 in the CIAA to win the Southern Division. They have the most wins in four years, and they’re two from the record (the 1988 and 1989 teams posted 21 victories). They bagged the most conference wins ever, a history that dates to 1974.

Stewart, a 2011 Davie graduate, played one year at Salem College and made the all-freshman team. She joined the Rams in the fall of 2014, but injury and sickness limited her to eight matches last year.

“I had a quad injury at first and then I ended up developing mono,” she said. “So I was out for a month and a half.”

Stewart’s senior year has turned out to be what she was hoping for. Early in the season, she bounced in and out of the starting lineup. But she recently broke into the starting six and has not looked back. She is seventh on the team with 40 kills. She also has six aces.

“It was a little bit of a rocky start,” she said. “Now I’ve moved to the starting position for middle and I’m hitting over the expected percent. Each game middles are expected to hit 30 percent. (In the second-to-last regular-season match), I hit 40 percent. A couple weeks ago I hit 75 or 80 percent.”

“We beat them at home and there we lost in five (sets),” Stewart said. “We should have beaten them; we just didn’t come to play that match.”

The CIAA Tournament will be held in Fayetteville on Nov. 20-22. It’s all or nothing as one team will advance to the regional.

“Everybody that we can potentially play in the tournament we’ve already beaten,” Stewart said. “We have overwhelming talent this year. Our drive is so much more than in the past to win the rings. We have so many good competitors this year, and as long as we come to play and we play our game, I think we can take it.”

Stewart is proud of what the Rams accomplished in the regular season, but “I will be even prouder if we win those rings for the first time,” she said.