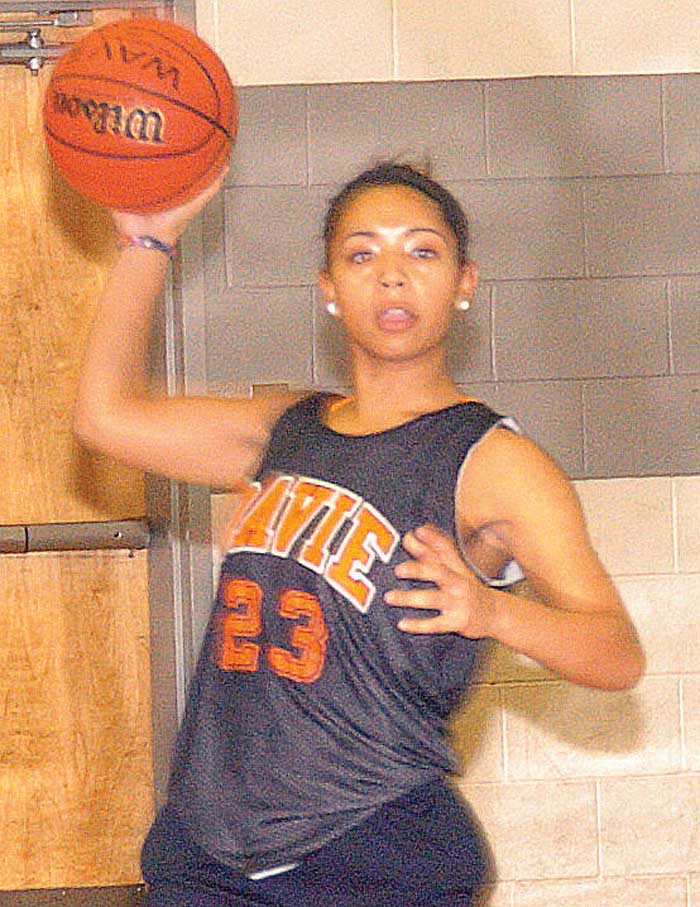 Girls basketball coach Dave Ruemenapp is more than just optimistic going into his third year at Davie. He is anticipating the War Eagles being one of those teams you get maybe once a decade.

Last year they went 18-7 overall and 9-3 in the Central Piedmont Conference, posting the most wins in 12 years and earning the best CPC finish (second place) in 10 years. Davie also ended a 21-game losing streak to Mt. Tabor.

“We should be very good,” said Ruemenapp, who is 27-22 at Davie. “We’ve got most back from last year and we were good last year. So I think everybody expects we should have a pretty good chance.”

The headliner is do-it-all point guard Madison Zaferatos, a fourth-year starter. She averaged 7.8 points as a freshman, 8.6 as a sophomore and 13.6 as a junior. Last year she also averaged five assists, four rebounds and three steals. She hit 42 3-pointers, ran her career total of double-figure scoring games to 39 and made the All-Northwest team. She has 737 career points and she recently signed with Brenau, a Division-II school in Gainesville, Ga.

“I think she’s in a position to do pretty much whatever she wants this year,” Ruemenapp said. “As long as she stays hungry, she should certainly be the catalyst for us.”

Zaferatos isn’t the only future college player on the War Eagles. Ashlyn Hampton, a 6-1 junior center and a third-year varsity starter, has committed to Division-I Campbell. As a freshman, she averaged eight points. As a sophomore, she averaged 9.8 points, 7.2 rebounds, 1.4 blocks and joined Zaferatos on the All-Northwest team.

“She’s got all the tools,” Ruemenapp said. “I think her confidence is going to take off now that she’s been offered from a school and accepted. I don’t think there’s anything that she can’t do. She should be one of the best rebounders (in the CPC), one of the best post players and she’s shooting the ball really well. I really think the sky’s the limit. I know people realize she’s pretty good, but I don’t think anybody has seen how good she can consistently be yet.”

Senior Aubriana Peebles is another fourth-year varsity member. The 6-0 forward averaged 11.8 points as a sophomore, including a pair of 20-point performances, and eight points and 5.4 rebounds as a junior. Unfortunately, she’s currently sidelined as she recovers from knee surgery. The good news: She is expected back by early December.

“She runs the floor, rebounds and has great hands,” he said. “When she comes back, she will give us a presence. It’s going to be a big help for us.”

“I think Caitlyn will have a breakout year,” he said. “I’ve been really, really pleased with everything she’s been doing. Martinez has taken off. She’s a high-energy player. Jones has worked incredibly hard. Crenshaw will be one of the first guards off the bench.”

“Tabor is a tough, hard-nosed inside player,” he said. “I think she’ll be a solid player all year, but she’s really going to help fill a void until Aubriana gets healthy. Cockerham can play inside and outside. Slabach was very impressive in the summer. I mean she can shoot the basketball.”

In a scrimmage against North Rowan, Davie banged 13 3-pointers in five quarters of play.

“It’s kind of nice to have started the season with everybody knowing where they’re at and what their role is,” he said. “The things we were able to do on the second day I wasn’t doing until the second month in past years.”

Last year there was a considerable gap between first-place Reynolds (12-0 CPC record) and everybody else. Davie was second at 9-3, while Mt. Tabor was third at 8-4. Long after securing the first winning record in five years, the War Eagles advanced to the second round of the 4-A playoffs.

Yes, Davie is thinking big. But it still won’t be easy to topple Reynolds from the top of the heap.

“Reynolds had a lot of seniors, but I’m certainly under the impression they’re still going to be really good,” he said. “I know they’ve got one outstanding guard. Both years I’ve been here they have fielded the most incredible athletes I have ever seen. I just don’t have a feeling that that’s going to come to an end.

“Tabor lost most of their scorers, but (coach Rick Anderson) does such a good job with his program and they’re going to be there year in and year out.

“I think West Forsyth is going to be good. One girl who was a freshman last year is a really good player, and I heard a big girl transferred to West.”

Marnic Lewis is back as Ruemenapp’s assistant. Debbie Evans has taken over as the junior varsity coach.