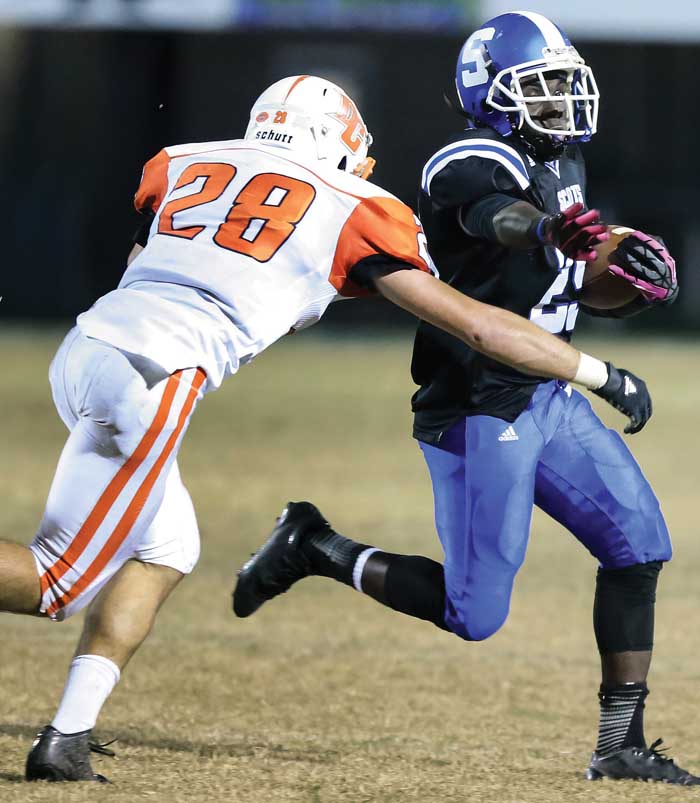 A War Eagle makes a tackle.

LAURINBURG – It will go down in the history books as The Greatest Upset That Wasn’t.

Visiting Davie County entered Friday’s first-round 4A playoff game with a 5-6 record as the 15th seed in the West Regional. No. 2 seed Scotland County was 11-0. The Fighting Scots are ranked No. 1 in The Associated Press poll, they had outscored opponents 40-17 on average and they had won 65 of 70 games over five years.

The Scots were an overwhelming favorite. They dwarfed Davie in size. Davie was supposed to be a punching bag.

But the War Eagles didn’t get the memo. They dug deep and came up with an inspiring, blow-us-away performance. They made a 125-mile trek and came oh so close to one of the biggest playoff upsets in state history. Scotland wound up winning the game 44-36. Davie, which led 8-6, 21-13 and 28-27, won people’s hearts.

When asked to describe his feelings, Davie coach Devore Holman fought back tears of pride. He needed eight seconds to gather enough composure to get his words out.

“Yeah, very proud of every one of these young men,” he said. “They fought through a lot of adversity all year and they played their rear ends off tonight. I think they really understand what family means. It’s bittersweet, man. They fought hard. They wanted to let them know where we’re from, that we wear DC on our chest and we weren’t going to come out here to lay down.”

Davie’s longshot chances were improved by Zamir White’s injury. The celebrated sophomore running back with 1,908 yards and the 173-yards-per-game average suffered a knee injury the week before against Richmond County. But no team gets to 12-0 because of one player, and most everyone still expected a lopsided game. What Davie did for four quarters had jaws on the ground. It was heart-tugging stuff.

“We gave them a scare,” Davie quarterback Chris Reynolds said. “We all realized nobody was giving up a shot. So we said the heck with it and said let’s leave it all out there and give it everything we’ve got and see what happens at the end.”

“My hat goes off to the Davie County kids,” said Richard Bailey, who is 51-5 in four years as Scotland’s coach. “On paper, it looked like a big mismatch and they did a great job.”

The trifecta of Reynolds, Ben Ellis and Cooper Wall was at it again. Reynolds rushed for 103 yards, passed for 268 while completing 20 of 31 throws and accounted for four touchdowns (two passing, two rushing). It was his fifth straight game with at least 86 rushing yards and his sixth straight game with 244 or more passing yards.

Ellis turned in his fourth nine-catch game of the season to go with 116 receiving yards. With eight catches for 129 yards, Wall delivered his fifth straight 100-yard game.

“They were a great team,” Bailey said. “Offensively, they’re a very good team. That quarterback is a special kid. So are 9 (Ellis) and 81 (Wall). You’ve got to give their coaching staff a lot of credit. They would move (receivers) over there or motion and single them up.”

Nothing seemed out of the ordinary at first, as the Scots returned the opening kickoff to their 48 and drove to the end zone in nine plays. For the second week in a row, Cody Hendrix blocked an extra point to leave the score 6-0.

“I’ll tell you what, they schemed it up,” Bailey said. “They did a lot of false pulling. They knew we read guards. They pulled guys that way and then the quarterback kept it the opposite way. He went opposite the pullers, so they obviously knew we were well coached and were going to read guard. Give their coaching staff a tremendous amount of credit.”

“It’s a read-option,” Reynolds said. “When that guard pulls, that leaves the defensive tackle in an open area unblocked. If the unblocked tackle goes to the running back, I just keep it. When I saw that tackle go toward Peyton, I pulled it and went to the open area.”

Davie’s defense showed grit, getting three stops on fourth downs, the first one on fourth-and-3 from the Scotland 45. Spencer Wilson foiled a jet sweep on third-and-5. On fourth-and-3, James Boyle, Michael Rauen and Cody Hendrix stopped the back two yards short.

“We went down there with a purpose,” Holman said. “We knew we had to protect the ball, execute, block, tackle and win the special teams. I give our team credit. They didn’t hold anything back. They went hard at them.”

Scotland methodically drove 59 yards for a 13-8 lead, but on its next series, Hendrix’s tackle for loss and Angel Perez’s pass coverage forced Scotland to punt from its 11. On second down, Reynolds and Ellis connected deep for 38 yards. On the next play, Reynolds kept the ball, cut right to find daylight and made another cut at the 5 to finish off a 17-yard TD. A two-point pass failed, but Davie had a 14-13 advantage.

Two minutes later, Davie turned back the Scots on fourth down. Boyle, who blossomed into a monster as a junior, had a tackle for loss that set up fourth-and-3 at the Davie 42. A pass to Willie Douglas was going to be good for a first down, but Anthony Hunckler’s tackle knocked it loose and resulted in an incompletion.

“There were big momentum changes to put us in good positions,” Holman said. “Coach (Tim) Devericks did a great job of mixing up the looks up front. They outweighed us up front and we didn’t want to be sitting targets all the time. So he moved those guys around, gave them different looks, and I think that’s the way you’ve got to do against guys like that. Everything we did tonight was something we’ve done all year, but we mixed our packages up.”

On the next play, Reynolds found Wall at the Scotland 39, and Wall sprinted down the sideline for 53 yards. His dive reached the pylon, but the line judged ruled he stepped out at the 5. No matter. Reynolds scored on a 5-yard run and Jared Griggs made the point-after kick.

With Davie ahead 21-13, the Scots and their fans were shaking their heads in disbelief and admiration. A monumental upset was in the making.

“Special player, man,” Bailey said of Reynolds. “We knew he was great on film. He’s like Houdini back there. He’s like Johnny Manziel. He’s so good with his feet. We’ve struggled with athletic quarterbacks, to be honest with you. We’re not real fast up front and he made us look very average.”

The Scots, meanwhile, leaned on quarterback Dashaun Ferguson and runner Khalil Smith. Ferguson ran 30 times for 152 yards to go with 13-of-20 passing for 160 yards. He had five TDs (four rushing, one passing), and he has 14 TD passes against no interceptions for the year. Smith put up 110 rushing yards.

“They didn’t have 34 (White) back there, but man, they still are electrifying,” Holman said.

Two more methodical drives – 74 yards in eight plays and 69 yards in nine plays – resulted in Scotland TDs as the half ended with the Scots in front 27-21.

“We just kept pounding and pounding,” Bailey said. “Our quarterback is a senior and he was determined.”

“At halftime, we talked about finishing the course, and we immediately stuck one in,” Holman said. “So we were ready.”

If the War Eagles didn’t have Scotland’s full attention at the outset, they definitely had it at halftime. Yet, Davie continued to carve up the Scots’ stout defense.

Reynolds threw short to Wall, who faked out two defenders. Then Mitchell McGee’s block at the Scotland 35 sprung Wall for a 52-yard TD. After Griggs’ kick, Davie had regained a 28-27 lead.

“We had momentum and felt like we could do anything. Anything,” Ellis said.

Rauen batted away a pass and Broc Barnette limited a completion to 2 yards to force Scotland to punt. The game turned when Caleb Wallace was flagged for roughing the punter. He missed blocking it by an eyelash, and he claimed to have barely tipped the ball. Scotland didn’t turn the break into points, but it clicked off seven more plays and chewed time off the clock.

“That was a huge momentum swing,” Bailey said.

A completion went for minus-1 thanks to a Jack Little tackle in space. Scotland went for it on fourth-and-3 at the Davie 30, but Kinston Whitener and Boyle denied Ferguson at the line of scrimmage.

Four plays later, however, Scotland blocked a Griggs punt and took over at the Davie 18. But Davie’s gritty defense got a small victory by holding Scotland to three points. On second-and-goal from the 7, Hendrix and a host of War Eagles smothered Smith for no gain. On third down, linebacker Boyle dropped into coverage and knocked down a slant pass. Scotland settled for a 26-yard field goal – its first FG of the year in three tries – and a 30-28 lead with 1:48 left in the third quarter.

“We tried to bend, bend, bend and not break,” Holman said.

On third down, McGee caught a pass over the middle and was crunched by two defenders. Somehow he held on for a 4-yard gain. Now it was fourth-and-1 from the Davie 33. Holman went for it, but Reynolds was stuffed at the line. Five plays later, running back Tyquan McNealy was in the end zone after a 16-yard run, and Scotland had a 37-28 lead.

“We felt like (Reynolds) was going to keep the ball right there,” Bailey said of Davie’s fourth-down try. “Jonathan Smith (a linebacker headed to UNC) and our guys kind of keyed on him. In hindsight, they might have been better off giving it to the tailback (Hampton) just because of the surprise of it.”

“If I had to do it all over again, I would go for it again,” Holman said. “We felt good about the play that we ran. Kudos to them for shutting it down.”

Davie was dealt another bad break when Ellis’ 24-yard TD was negated by a holding penalty. Davie wound up punting.

“They get us on a holding. You look at that scoreboard and we’re a touchdown and a two-point conversion away,” Holman said.

Scotland struck again by covering 86 yards in eight plays. At 44-28 with 4:32 to play, Davie looked spent and Scotland appeared to have it wrapped up.

Davie, though, refused to go away. A 13-yard run by Hampton was sandwiched between four straight Reynolds completions, including a 17-yard TD over the middle to Ellis. With 1:51 to go, the War Eagles had to have the two-point conversion to stay alive, and they got it. Reynolds found Ellis for two points for the fifth time this season, and it was 44-36.

“Great player,” Bailey said of the 5-11, 170-pound Ellis. “I hate to say it, he doesn’t have the height and he’s not necessarily a burner. But I’ll tell you what, he runs great routes, and if you get it near him he catches it. He should be at least a D-II scholarship guy. Without a doubt, he’s a special kid.”

Griggs executed the onside kick. It took a crazy bounce and ricochetted off a Scot. But Davie couldn’t get to the ball in time, and Ferguson’s 8-yard run on third-and-8 effectively killed the clock.

“We were very close to getting the onside kick,” Holman said. “It hit their guy and popped out. We just couldn’t get on top of it. We couldn’t ask (Griggs) to kick it any better. We laid it all out on the line. You take one or two things that don’t happen …”