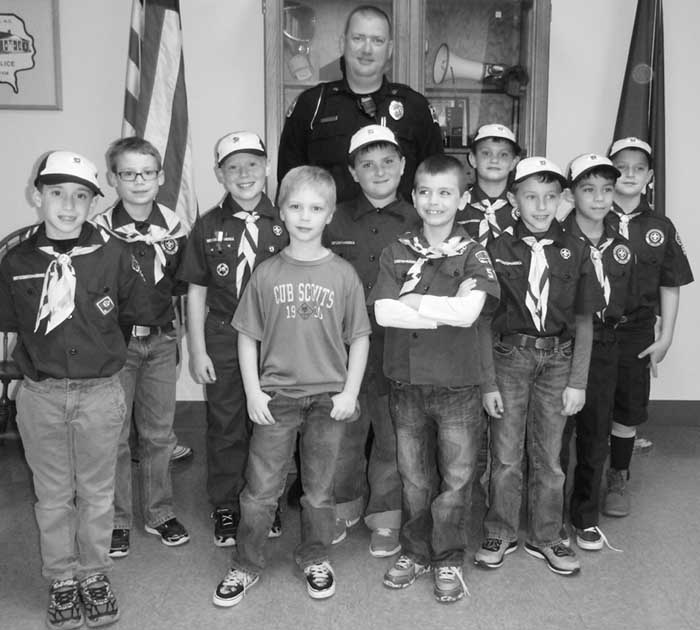 On Oct. 19, the Mocksville Police Department hosted Cub Scout Pack 574’s Bear den for a tour of their department.

To achieve their “Paws for Action” Adventure Loop, the Bears had to visit a police station, talk with officers, and ask questions to help them learn how to stay safe.

Police Chief Todd Penley welcomed the Bear den and their parents to the police department.

Officer BJ Nichols showed patience as he took the boys on a tour of the department and fielded their questions.

Nevan Ellis’ favorite part of the tour was looking at the glass case display holding antique police memorabilia. Nichols handled every question the inquisitive Scouts posed about the police artifacts and extracted each piece to allow the boys a personal view.

After seeing the conference room, town maps and law books, and asking copious questions about jails and criminals, the Scouts were ushered into Officer Stuart Shore’s office space.

Shore, an Eagle Scout, shared personal memories of Scouting and gave the Bears advice on achieving their own Eagle Scout awards in the future.

Parents were then given tips on keeping their boys safe and the importance of keeping an accurate record of their child’s fingerprints and DNA on hand. Each Scout was fingerprinted and that record given to each parent.

To cap off the evening, the Scouts were escorted outside for a tour of the Mocksville Police Department’s award winning cruisers.

Jared Burgio’s favorite part of the night was seeing and sitting in the police car.

Barrett Taylor was most interested by the fact that the officers had a computer in the front seat of their car.

Bear den leader, Jason Lawrence, stated: “Visiting the Mocksville Police Department has become a tradition over the years and because of that we have developed a good relationship with the department.”