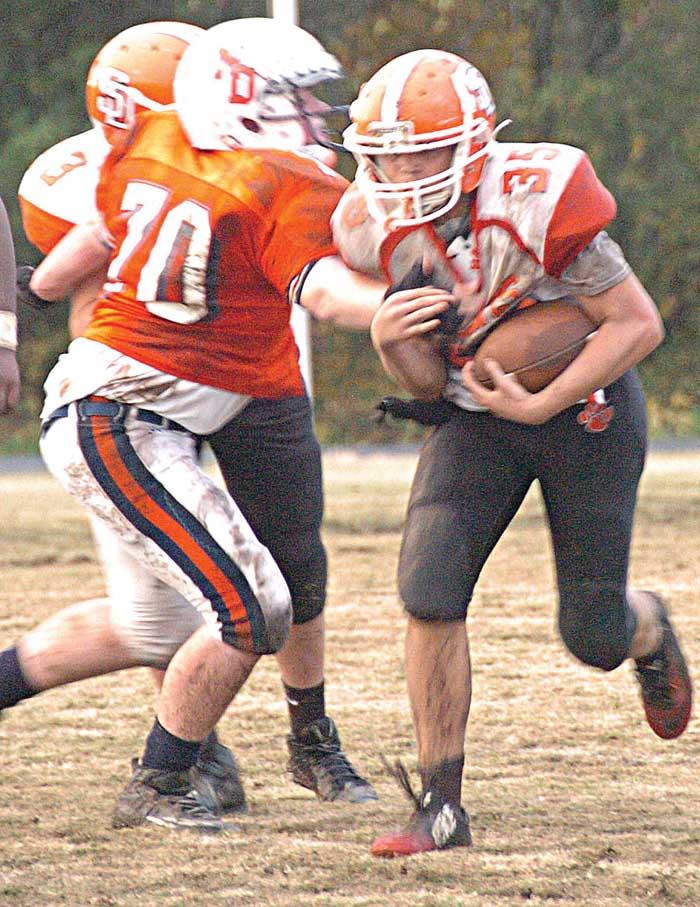 How’s this for an exclamation mark?

When North Davie’s football team hosted South Davie in the final game for both teams on Nov. 4, the Wildcats showed their one-loss record was no fluke. Winning 14-0 sure proved it. It was not as close as the score because South never came close to scoring.

After four days of rain, it was a slip-and-slide game on a muddy field.

The win satisfied a hunger for the Wildcats, who had not beaten South since 2005. It was significant because it marked the most North wins in nine years. It will never be forgotten for many reasons: North spoiled South’s bid for a perfect season, and it shut out South for the first time since who knows when. From 1993 through 2014, North never blanked South.

“It all started July 9, the first day of summer workouts,” said North coach George Newman, who was assisted by Jonathan Mayfield, Timmy Allen, Terry Hunt, Trey Copeland and Trevor Gooch. “If you look at the kids who started or played a bunch, almost every one of those kids were here every day we had something going on. We had a seven-on-seven tournament here. We went to a jamboree in Asheboro. I don’t know how many hundreds of hours they put into it. They wanted to make sure there was no doubt that they could do it. Not doubts in themselves, but they wanted to show everybody there’s no doubt what we can do.”

South had surged to 6-0 behind a high-powered passing game. But North, which only allowed 9.2 points per game for the season, completely smothered the air attack, collecting four interceptions.

“Our defense has been coached up since day one versus the passing game,” Newman said. “In the seven-on-seven that we had here, we had six schools and that paid off. Coach Hunt has really developed the secondary. I mean look at how many interceptions we had. We seemed to be velcroed to their receivers. I think it’s the most comfortable secondary I’ve ever seen at North.”

Yet, North stunned South on the very first snap. Anthony Deters connected with Joe Johnson on a go route down the South sideline, and Johnson went 74 yards to the end zone. Johnson finished the play with flair, breaking two tackles inside the 10. Thirty-five seconds in, it was 6-0.

“When we had warmups, they were in their individual groups and Anthony said: ‘Hey, I’ve got one more guy to throw to,’” Newman said. “The last person he had to throw to was Johnson on the go route. He was hitting him right on the fingers. On the video, when he rips away from the tackles, you see everybody’s motor amp up.

“We knew we had to jump on them early.”

The opening stages unfolded as if North had scripted it. On South’s first possession, it threw a pass from midfield. Deters went up, intercepted at the North 17 and returned it 41 yards to the South 42.

“For a middle-school team, we’ve had a bunch of interceptions this year,” Newman said.

Everything clicked for North, including special teams. Johnson’s punt pinned South at its 11.

“We flipped the field,” Newman said. “Joe’s very good at placing the ball. In fact, to (set up) our one score there at Lexington, he punted one to the 1-yard line. In every situation where he’s had to punt, it’s always been a positive result.”

South went for it on fourth-and-4 from its 19, and the pass was knocked down by Noah Bohannon. North capitalized on the short field, with Adrian Cranfill scoring from 10 yards out. He swept around left end and lowered his shoulder at the goal line. With Garrett Boger snapping and Bohannon holding, Deters made the extra-point kick to give North a 14-0 lead with 1.9 seconds remaining in the first quarter.

“The play had to change immediately, and that’s one thing Cranfill can do,” Newman said. “He’s got good change of direction. He had to hop back to the left because everything was flowing hard to the right. They knew what we were running. He cut back and just outran the defender.”

North already had more than enough points, even against a team that came in averaging 24 per game, including 33 in the last three games.

Channing Glenn batted down an Alex Ratledge pass to set up fourth-and-a-mile. Then Justice Redmon intercepted a deep ball with a juggling catch as he fell to the ground at the North 27.

On South’s next possession, Redmon denied a third-and-9 pass attempt to Jack Reynolds. On fourth down, Austin Shaver’s run only gained 4 yards as Matthew Hill made the tackle at the South 45.

With nothing to lose with only 30 seconds left in the first half, Deters’ long pass to Johnson was intercepted by South’s Lenny Adame at the South 16.

“I was hoping to be up 20-0, because I thought it was going to take that to hold on,” Newman said.

North’s defensive dominance continued in the second half. On third-and-7, Ratledge’s pass to Ben Crenshaw was batted down by defensive lineman Grant Copeland. Ratledge kept the ball on fourth down, but a wall of Wildcats stopped him short of the marker at the South 32.

Johnson punted into the end zone. South was at its 20 with 2:43 left in the third. On fourth-and-9, linebacker Isaiah Cuthrell intercepted and returned it to the South 20.

But Ratledge got an interception on the next play as the third quarter came to an end. Moments later, South had fourth-and-3. If there was going to be a turning point, it was going to happen right here. M.J. Holleman got the handoff, and he was stopped short of the stick at the South 39. Hill made the key tackle. South was cooked.

After Johnson planted a punt inside the South 10 with 3:45 to go, Cuthrell came up with his second interception.

“In those field conditions, offenses aren’t really going to win a game unless there’s a breakaway,” Newman said. “We’re a small defense, but we play fast. When you look at it on tape, it seemed like we were one step ahead. We knew where everything was going. We knew how plays were going to develop – everything from Ratledge’s zone reads to having a feel for the routes.

“You’ve got to give credit to the fact we’ve got good athletes. Our athletic ability has upscaled a lot this year.”

Newman was ecstatic about how his defensive line (Owen Brown, Paul Pollard, Logan Ballou-Tomel and Copeland) played all season.

“Pollard and Brown’s maturation from last year to this year … they’ve added another element to what they do,” he said. “They’ve developed some speed of getting off the ball and attacking. Coach Copeland has done a good job in developing them.”

The Tigers had won 10 straight meetings, outscoring North 258-76 in that span. The last time North beat South was in the eighth-grade game in 2005, when Zach Long lifted the Wildcats to a pulsating 21-20 victory. With 43 seconds left, Long scored a game-tying touchdown from 4 yards out. Then he drilled the extra-point kick. The late Ron Kirk was North’s coach then.

“I was in Iraq (at that time),” Newman said. “Ron emailed me the day after it happened. They all signed a picture for me and I’ve still got it.”