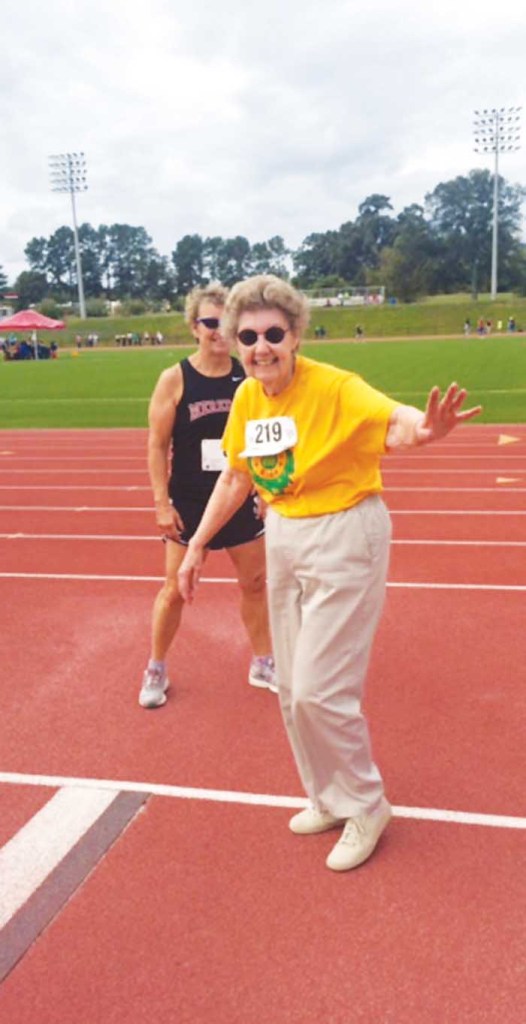 The man stretched this way and then that way. He bent over and sideways, flexing his muscles. Then he started concentrating and fidgeting – all getting fired up to jump in the North Carolina Senior Games.

Nancy Tutterow had signed up for jumping, as well, and was waiting her turn, watching the spectacle the man was creating.

It came her turn. She mimmicked every move that man had made. Officials running the event couldn’t stop laughing.

“I thought you know what, I’m going to try all those things … and everytime I got a little bit better. The guys got a kick out of me and that really made it fun.”

Sure, Tutterow, 91, of Mocksville, was going to try to do her best – but she also did what she always tries to do – have fun.

She has racked up bronze, red and blue ribbons and medals – so many that she no longer accepts the awards at local games. This year at state games, she participated in the standing and running jumps, basketball shooting, shuffleboard, football throw, softball throw, spincasting, bocce and cornhole. She was going to enter a walking event, but it interfered with another competition.

A few years after retiring, Tutterow was taking part in a walking program at the Brock Gym in 1993. After the walking was over, she noticed a basketball laying on the floor. Noone was around, so she picked it up and started shooting.

An employee ran out and encouraged her to sign up for senior games.

“I said, why? She said ‘to shoot basketball’. I said I’m not any good at it and she said ‘that doesn’t matter’.”

She had been looking for something to do, so she signed up for walking and basketball shooting. It was three years before she earned her first medal.

The late Hollis Smith was a good friend and senior games participant at the time. “Hollis went wild. She could hardly wait,” Tutterow said.

She missed competing one year because of illness, but came back strong.

“I always tell people who want to make fun of me, well, my doctor told me to never stop. She said you don’t realize how much that might help you.”

Smith and Aileen Steelman bought into that philosophy, as well. “She (Steelman) said that’s exactly what my doctor told me … to stay active.

“Hollis almost made me do it. She would call and say meet me at the gym, we’re going to shoot basketball today. She encouraged me because she wanted to compete against somebody locally … and I got better than her at some things.”

There was this cornhole tournament at the state games. Tutterow had no intention of competing, but Smith insisted. She won her first match, but the weather was nasty. “I made a bee-line for the van. I was hungry, cold and miserable,” Tutterow said.

It wasn’t long before Peggy Evans ran to the van, telling Tutterow her next match was getting ready to start. She won the bronze medal.

Tutterow, who designed the Davie Senior Games t-shirt with a logo and the slogan “Yesterday’s Kids,” relishes the friendships she has made with fellow participants and recreation department staff. She has nothing but praise for the current Davie Senior Games director, Sandra Boyette. “She loves us all and is so good to us.”

Tutterow is active in her church and community, and goes bowling once a week. Being 91 isn’t so scary, and “you can get by with everything,” she said.

Tutterow doesn’t mind when she tells people her age and they say she doesn’t look or act 91.

“As I tell other people, hang in there.”

And remember to stay active. And have fun.