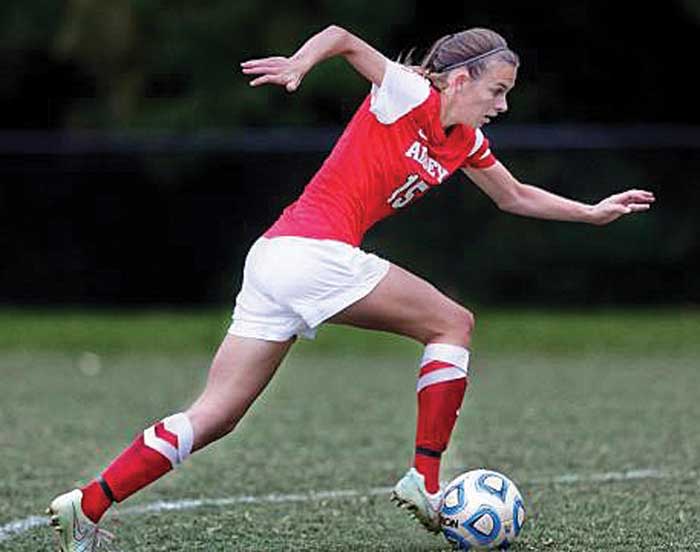 Belmont Abbey's Laura Shelton is second in the nation in assists.

Laura Shelton’s senior soccer season at Belmont Abbey has been a storybook ride.

Not only did the Crusaders capture the regular-season championship in the Carolinas Conference, Shelton has been vital to Abbey’s success. Abbey was 16-3-1 after losing in the conference tournament final, and it’s season is over if it doesn’t receive an at-large berth to the NCAA Southeast Regional. It found out that important news Monday night.

The midfielder from Advance has started all 20 games and piled up 27 points (seven goals, 13 assists). She was an All-Carolinas Conference selection on the first team. She leads the league and is second nationally in assists. She’s eighth in the league in points and 12th in goals.

Shelton is not the only Davie County product on the team. Brooke Hedgspeth is a freshman fullback from Advance.

“I could talk about Laura and Brooke all day, because they’re just great kids,” Abbey’s fifth-year coach, Mike Lynch, said.

“She’s just been huge for us this year,” he said. “She’s had a very positive, productive three years. She’s always been an integral part of our team and our attack.

“I made her a wrong-footed player – that’s a soccer term for when you put a right-footed player on the left side – two years ago (during the ‘13 season) and she’s as good with her left as she is with her right. And it’s really showed up this year. In the role she’s playing in the midfield, we gave her a little more attacking freedom this year compared to last year, and it’s allowed her to flourish. I mean it’s exciting to watch her run at opponents.”

Shelton was named Carolinas Conference Women’s Soccer Player of the Week for matches Oct. 26-Nov. 1. In that week, she had seven points (three assists, two goals). In a 4-0 win over North Greenville, she handed out three assists.

Later in the week, Abbey hosted Limestone in the regular-season finale. With both teams 10-0 in the conference, it was a highly-anticipated match.

Shelton stole the show, scoring both goals in a 2-1 victory that clinched the regular-season crown. With the score 1-1 and 1:23 to go, she drove in the game-winning goal from long range.

“When two teams are battling it out like that, you always wonder if someone is going to pick up the team and put them on their back,” Lynch said. “In the last 10 or so minutes, Laura was saying: ‘I’m going to go get this goal.’ On the play where she scored (the game-winner), she went and found the ball. She went from the right side to the left side across the face of the goal just outside the penalty area. She beat the player and had a good look at the goal, and then turned and hit it. She put it in the upper-right corner. Limestone’s goal keeper is very good, but Laura put it in a spot where she just can’t get it. I mean, it was a great goal in any game. But to do it in a game that determines the regular-season championship with less than two minutes left is phenomenal.”

Abbey was the host of the conference tournament. In the semifinals on Nov. 5, the top-seeded Crusaders defeated No. 5 Converse 2-0 to push their winning streak to 13. Shelton dished out her 13th assist to help her team advance to the tournament final for a record 11th consecutive year.

A huge rematch with Limestone in the championship game on Nov. 7 was moved to the Saints’ field because of inclement weather. An automatic berth to the NCAA Tournament was on the line. No. 2 Limestone broke Abbey’s heart 1-0, scoring in the 71st minute to claim its first conference championship. While Limestone improved to 16-3, Abbey, ranked sixth regionally in the latest rankings, slipped to 16-3-1.

Abbey fell short despite outshooting Limestone 16-8 and attempting five corner kicks to one by the Saints.

Shelton was among three Abbey seniors named to the all-tournament team.

Lynch is thrilled with the contributions he has received from Hedgspeth, a freshman who has played in every game and chipped in three assists.

“She’s playing fullback, an outside defender position, and she splits time with a senior who has had a great career,” Lynch said. “We knew we needed depth to be able to pull this (new scheme) off, and Brooke came in and has done fantastic.”

Lynch envisions big things in the future from Hedgspeth.

“She’s one of our top athletes,” he said. “The first time our strength and conditioning coach saw her, he said: ‘Who is that kid?’ I said: ‘That’s one of our new freshmen.’ He said: ‘She looks like the top athlete in the school.’ She’s fast, she’s got great endurance, she’s strong. She’s just a great athlete as well as a good soccer player. So she’s fit into that role really well. She’s a tough defender. She’s got the speed, pace and endurance to get forward as well as get back. We’ve just been thrilled with how she’s done.”