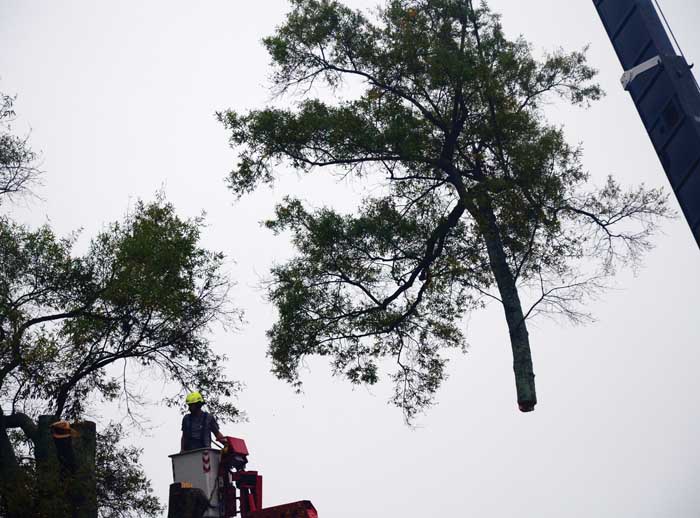 A porition of one of the oak trees comes down.

The lighting of the oak trees on the square in Downtown Mocksville will be less bright when the switch is flipped during the annual bed race on Friday, Nov. 20.

Two of the four trees have been cut down, victims of a disease.

Town crews were getting the trees ready to hang the holiday lights on Thursday, Nov. 5 when they noticed dead limbs at the top of the tree that lost a large limb in 2014. At the tree closest to the courthouse, wood near the base was so soft they could push their hands inside it past their wrists.

The trees have been under the care of David Lusk with Lusk Tree Services for more than 20 years, and were being treated for a fungal disease called hypoxylon canker. He was contacted, and after inspecting the trees, recommended they be removed.

“Given the immediate hazard and poor health of the tree (at the courthouse), removal is necessary,” Lusk wrote to town officials. Because the other tree has the same disease and already lost a large limb, he recommended it be removed, as well.

Town Manager Christine Bralley contacted the mayor and board members, as well as the town attorney. “All agreed safety was the main concern and there were no other options.” Vehicles and pedestrians are under the trees daily.

Removal started the next day, on Friday.

Lusk said the trees have been resilient, living in conditions that aren’t best for a tree’s survival. Surrounded by concrete and asphalt, with roots having been cut to make way for underground utilities have also taken a toll.

“All things considered, these trees are testament to resilience as they have lived in difficult circumstances,” Lusk said. “I wish there were another option other than removal of the two dying trees. From the standpoint of safety, the best recourse is removal.”

The other two trees are “in relatively good health,” Lusk said.

“We are very sad to see these two oak trees go, but we are grateful for the shade and beauty they have given us for so many years (They are about 80 years old.),” Bralley said. “We appreciate your patience as we strive to find a balance between the safety of our citizens and aesthetics of our town.”

No decision has been made of when, or if, new trees will be planted on the square.

The oak trees have been a focus in the downtown area for more than a lifetime. Visitors rave about them. Families go there during the holidays to enjoy the spectacle of lights. A tavern was named after the trees. A festival is held in their honor.

Crowds gathered as they were being cut down, offering their own stories of what the trees mean to them.

Cutting the trees brings a lot more sunlight into the downtown area, and also exposed a side of the county courthouse that wasn’t easily visible. The county already has courthouse renovations – including cleaning the outside – on its agenda for next year.

Lusk said that as the trees age, they became more susceptible to the disease.

“We had no choice but to take immediate action for the safety of our citizens,” Bralley said.