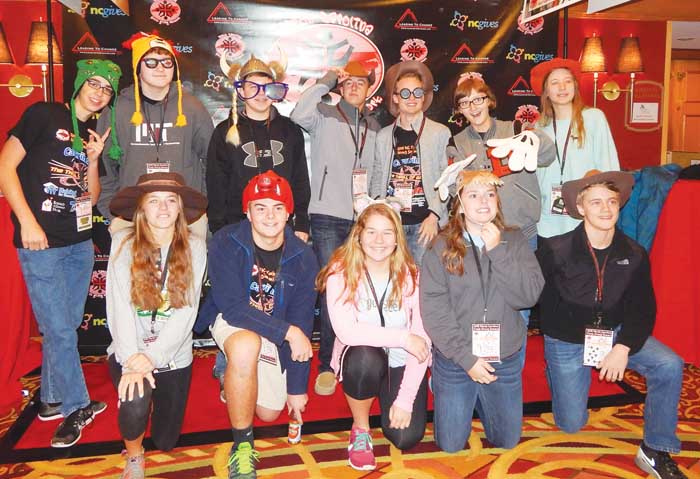 The Davie Community Foundation SURF Board attended the NC Youth Giving Summit, “The Thrill of Giving” in October.

They were named the “2015 Community Site of the Year” in North Carolina. Their volunteer work, grant making, and successful 5K run, the POPSICLE 5K, were standouts in the state.

“I was so proud of these young people,” said Tami Daniel, SURF advisor. “They had a terrific year last year and are off to a great start this year. They are a fantastic group of young people.”

Twelve of the 21-member board, along with Tami and chaperone Will Marklin, represented SURF in Charlotte.  They arrived Friday evening and quickly began team building and leadership activities.

One of the highlights of Friday evening was getting to know the young people from Northhampton County, “YES.” The two groups enjoyed an evening focused on leadership and team building, by the leading to change staff, who sponsor the Summit.

On Saturday, SURF and YES were joined by four additional groups from around the state for a morning of training, and learning from each other about what their groups are doing in their respective communities.

After lunch, each group was sent the their service site for an afternoon of giving. SURF went to the Romare Bearden Park in downtown Charlotte, to help host a fall festival. The SURF students were assigned to the pumpkin carving tent, and had a great afternoon helping children carve the pumpkin they had chosen from the pumpkin patch next door to the tent.

Once their time at the festival was over, they headed to Carowinds to meet up with the rest of the groups, for the award presentations. The day was capped off with a chance to have a little fun in the park before closing time.