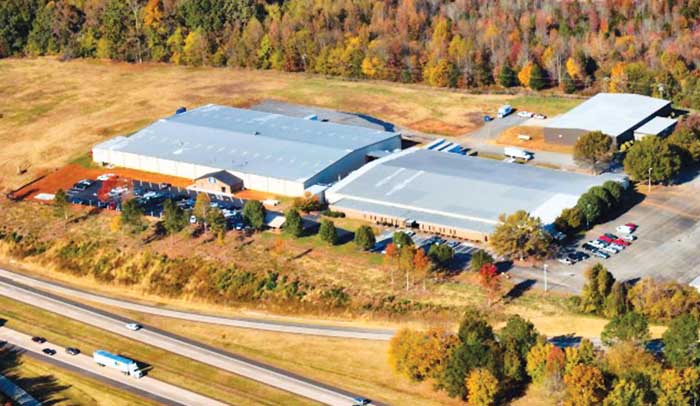 This aerial shot shows the ProRefrigeration site on Farmington Road at I-40.

The layout of the new location doubles the amount of space dedicated to the manufacturing process.

Pro Refrigeration was founded in 1990 and is headquartered in Auburn Wash. In 2013, after a year-long search for a site that would fit their east coast expansion plans, the family owned manufacturer decided that Davie County best reflected their vision for the future.

According to CEO Jim Vandergiessen Jr., “We chose Davie County for our east coast manufacturing plant because of the skilled workforce, the business friendly environment, and the amazing support we’ve received from everyone we’ve met.”

“After a series of economic development wins since over the last several years, Davie County is running low on our inventory of existing buildings. While the former Renegade Tobacco warehouse had just about the right amount of space for the Pro Refrigeration expansion, there were some key pieces missing, including office space and parking. The building is owned by several local entrepreneurs who were able to work to up-fit the space to meet Pro Refrigeration’s office and parking requirements. Local entrepreneurs engaged and invested in economic development results in broad community support for local entrepreneurs.”

On Saturday, Oct. 24, Pro Refrigeration held an open house in the new Davie plant to celebrate 25 years in business and to showcase their new facility to the community.