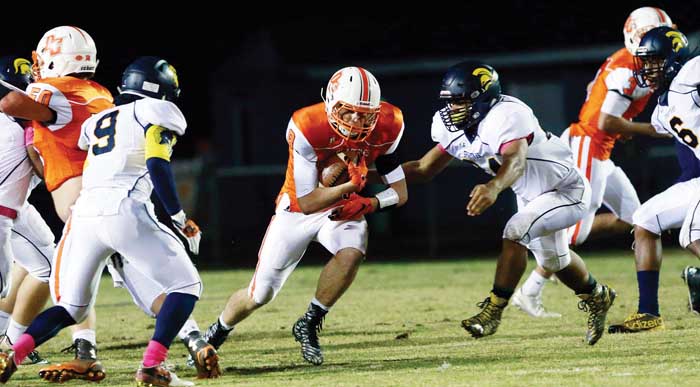 One of the best things about sports is how quickly the mindset can change.

For Davie’s football team, it had been a quiet season in the win-loss column, losing three straight to put its back against the wall. When Davie and Mt. Tabor met here Friday, the season was on the line for both teams. Davie must win the last two games to qualify for the playoffs. In its regular-season finale, Tabor was in must-win mode to guarantee itself a postseason berth.

The War Eagles responded with the grit and oomph to stave off the Spartans 40-33, and no one will soon forget it. Davie’s third-year coach, Devore Holman, flashed a huge smile filled with relief, joy and vindication. It was his first Central Piedmont Conference win over someone besides Reynolds and Parkland. Not only did it save the season, it exorcised demons. Davie had lost three straight, 13 of 15 and 18 of 22 to Tabor. This win might be what serves as the springboard for Holman’s program.

“We had to get this win,” Holman said. “In Reverend (Shane) Nixon’s message today, he asked: ‘Are you going to play for the guy beside you?’ That’s what these guys did. They played for one another.”

“My teammates have embraced me this year,” said Wallace, who returned to football in 2015 after not playing for two years. “We’ve been close. We’ve been chipping at it. We finally broke through. It’s Senior Night and it means a lot to us. We’ve worked all year for this.”

“I can’t describe it in words,” junior linebacker and leading tackler James Boyle said. “I wanted to get a win for the seniors. I can’t imagine what it feels like to play your last game on our home field. To leave our home field with a win, that must be an amazing feeling.”

The breakthrough was a testament to quarterback Chris Reynolds and the dynamic duo of Ben Ellis and Cooper Wall. Reynolds, who is as hot as you can possibly get, completed 25 of 28 passes for 250 yards and two touchdowns without a turnover. As if that weren’t enough, he ran 21 times for 90 yards and two TDs. Ellis set a single-game record with 12 catches and had 100 receiving yards. Wall had six catches for 103 yards. Reynolds also connected with Mitchell McGee, Peyton Hampton and Greg Dalton.

“I can’t do it by myself,” Reynolds said. “When you’ve got people like Ben Ellis, Cooper Wall, Mitchell McGee and Beau Byerly out there, it’s hard to miss. (Ellis and Wall) are both so good, you can pick either one and they’re going to show out. It’s amazing. They’re freak athletes; I don’t know what I would do without them.”

In the early going, the War Eagles drove from their 28 to the Tabor 1 in eight plays, but on fourth down, they couldn’t punch it in.

On back-to-back plays, Tabor quarterback Teddy Christakos went up top for Deablo, the 6-4, 205-pound receiver who has committed to Virginia Tech. Both times safety Avery Williford was there to prevent a big play. Then on fourth down from the 4, Davie struck as Tabor punted from its end zone. Boyle broke through the middle of the line to block it. The ball rolled out the back of the end zone for a safety and a 2-0 Davie lead.

“We worked on it all week,” Holman said. “We called it Spartan. I give that to (former Davie coach Doug Illing). Coach Illing helped me understand how to block a shield punt a long time ago, so that’s what we did.”

On the ensuing possession, Reynolds’ first-down pass to Ellis resulted in 31 yards and sparked a drive to the red zone, where Davie called on kicker Jared Griggs. Davie was 0 for 4 on field-goal attempts before Griggs nailed a 33-yarder to make it 5-0.

Deablo turned the momentum with a 42-yard punt return to the Davie 1. Isaiah Jones, who registered 100-plus rushing yards for the sixth straight game, scored and a subsequent two-point pass gave Tabor an 8-5 lead.

Davie came right back. Wall spun loose for 38 yards on the kickoff return. On third-and-3, Reynolds, who is adept at buying time, rolled right and found Ellis for 9 yards. Two plays later, Reynolds hit Wall for a 6-yard TD and Griggs’ extra point sent Davie to a 12-8 lead.

“I told you before the season that Chris is a special young man,” Holman said. “He has the ability to make something out of nothing.”

Five straight runs by Jones, who had 23 carries for 112 yards, pushed Tabor to the Davie 15. But Jones left and linebacker Broc Barnette stopped Daquon Mason for minus-1 runs on back-to-back plays and Tabor wound up attempting a 39-yard field goal. The kick was well short.

Davie went 80 yards in 10 plays. Wall made an 11-yard reception to keep the drive going. Ellis and Wall drew pass-interference penalties on consecutive plays, and Davie reached the Tabor 1 when Reynolds rolled out and hit Ellis for 6 yards.

On third-and-goal at the 1, Reynolds set up in the customary shotgun, then suddenly rushed forward to take the snap under center. He tried to sneak it up the gut, but he was going nowhere. He bounced outside and walked in. Davie’s lead was now 19-8.

“Before the play, I saw the linebackers come down and they clogged the middle,” Reynolds said. “I bounced out because they didn’t have anybody on the edge.”

“He reminded me of Jacob Barber doing that same type thing before halftime (in a second-round upset win at Tabor in 2010),” Holman said.

For Davie, the end of the half didn’t go as planned. A pooch kick set Tabor up at midfield, and two completions allowed Ben Gardner to hit a 34-yard field goal as the clock hit zeroes.

Tabor tied the game on the first play of the second half. When Deablo caught a short pass, the defensive back slipped and couldn’t recover. Deablo waltzed 70 yards to paydirt. Jones’ two-point run knotted things at 19.

Trouble for Davie? Nope. Reynolds completed 18 of 20 first-half passes, including 10 to Ellis, and the torrid pace just continued in the second half. Tabor blitzed on second-and-16 and Davie had the perfect play – a bubble screen to Wall, who picked up 34 yards. Then McGee made a diving catch over the middle for 10 yards.

“Mitchell has beautiful hands,” Ellis said. “He makes big plays just like everybody else.”

“We practiced all week to beat the blitz,” Reynolds said.

“They sent the house and coach (Todd Bumgarner) and the offensive staff did a great job of having built-in hot routes,” Holman said.

From the Tabor 11, Reynolds floated a perfectly thrown pass in the back left corner of the end zone. Ellis squeezed it for six. A pass out of the muddle-huddle formation failed, leaving the Davie lead at 25-19.

“I believe in him 100 percent,” Ellis said of Reynolds. “When he drops back, he can run, he can pass, he finds his open receivers. He’s the man.”

On first down from the Tabor 49, a Tabor pass deflected off Deablo’s hands and Wallace plucked the ball out of the air as he was falling to his back. Wallace’s fourth INT marks the most in three years (Caleb Mathis had four in 2012).

“I’m so happy he came back (after not playing for two years),” Reynolds said. “He’s a big playmaker for us.”

“What a pick,” Holman said. “Oh my gosh, the ball came off (Deablo’s) hands and somehow he leaned back and was able to grab it and keep possession of it.”

Three plays later, Greg Dalton’s first carry was a 40-yard explosion – his longest of the season – through the teeth of the defense to the Tabor 7.

“All the running backs have to do the same thing and be patient,” Holman said. “When their number is called, they’ve got to produce.”

Reynolds faked a handoff to Dalton and found a wide lane around left end, the TD bumping Davie’s lead to 32-19 with 3:34 left in the third quarter.

The Spartans, however, would not go quietly. They made it a nailbiter by marching 80 yards. Twelve of 13 plays were runs and Tabor was within 32-26 with 10:22 to play.

“They just went bam, bam, bam,” Holman said. “We had to try to stop the bleeding. Bend but don’t break.”

On second-and-11, Reynolds went over the middle to Wall, who received a block from Hampton and accelerated down the sideline for 35 yards. When Hampton plunged in from the 1, Davie had scored on five straight possessions.

Looking to go up by 14 points, Davie went for two. It was successful thanks to an improvisational, backyard play by Wall. Reynolds immediately rolled right as Hampton and Byerly blocked for him. Reynolds retreated to the 10, then backpedaled to the 15, then drifted back even more. Wall, who was split left, ran back with his right arm raised, calling for the ball. Reynolds threw across the field. Wall caught it and took a few steps forward. With a defender closing in, Wall fired it to Ellis. Lo and behold, Ellis jumped up and caught it to extend the lead to 40-26 with 7:13 to go.

“I’d like to let people know that was a script and that we planned that, but it wasn’t supposed to happen,” Reynolds said. “That was just playmakers making plays.”

“You can’t script that up,” Wallace said.

“I saw Chris rolling out and I knew he could make the throw back across the field to me,” Wall said. “When I caught it, I saw the Mt. Tabor guy closing in on me, but I saw Ben streaking across the end zone and I just let it go. I knew I had to make something happen. It wasn’t a very good ball; Ben made a heck of a play on it.”

Reynolds’ run of 18 straight completions ended on first down, but Davie ripped off 51 yards on four straight plays. Tabor was all but down for the count. But near the end of Reynolds’ 16-yard keeper to the Tabor 19, he was stripped and Tabor one last shot.

“I should have gone down,” Reynolds said of the fumble. “They had me praying over there (on the sideline).”

Davie nearly wilted as Tabor drove from its 20 to the Davie 28 in four plays. On second-and-7 from the 25, Ellis had tight coverage on a deep pass to Jaquan King. On third down, Christakos was flushed out of the pocket and threw incomplete. Tabor called timeout to draw up its fourth-down play.

“Coach (Tim) Devericks was telling them this and that,” Holman said. “I said, simply: ‘Guys, don’t let No. 1 (Deablo) behind you.’ Before you give him a touchdown, take a pass interference.’”

Tabor’s play was what everyone expected – a home-run ball to Deablo, who put up 163 yards on six receptions. Cornerback Angel Perez was on the coverage down the right sideline. Wallace read it the whole way and came over for support. Wallace made sure the game did not slip from Davie’s grasp, jumping from behind Deablo and knocking the ball down with his right hand.

“I knew they were going to No. 1,” Wallace said. “My corner (Perez) put me in a great position to make a play. When he was underneath, I was over top to make the play. I can’t say my heart wasn’t beating pretty hard. (Deablo’s) a phenomenal player.”

“I jumped up,” offensive lineman Luke Pratapas said. “I’m probably not going to have my voice by tomorrow.”

While the end couldn’t come fast enough, “it was exciting, though,” Boyle said. “That’s what we live for. Caleb played a great game. He had an interception and he won the game for us on the last play.”