Balsam Range at the Brock Saturday 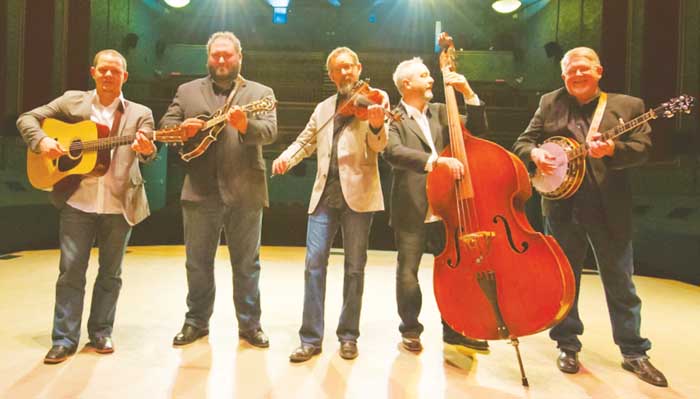 Balsam Range will be at the Brock Performing Arts Center in Mocksville on Saturday night.

Davie County Arts Council will host a concert by Balsam Range on Saturday, Nov. 7 at 7:30 p.m.

Buddy Melton did not get serious about playing his fiddle until he attended Western Carolina University. He first played with Rock Springs Reunion, a gospel bluegrass group. They landed a song in the top 10 gospel bluegrass charts.  He settled in Nashville and played for Jubal Foster.

From there he has been asked to play with artists such as Sam Bush, Rhonda Vincent, Porter Wagner, Jon Randall and more. Recently, he released his first solo bluegrass project which features Tony Rice, Adam Steffey, and bandmates Tim Surrett and Marc Pruett.

Darren Nicholson, who plays the mandolin, is a 2006 Grammy Nominee.  He won the IBMA Entertainer of the Year in 2014.  The list of who he has recorded or performed in concert with is like a who’s who of bluegrass and country music:  Rhonda Vincent, Crowe Brothers, George Jones, Zac Brown, Merle Haggard, Earl Scruggs, Tony Rice, Doyle Lawson, Russell Moore and Vince Gill …

Marc Pruett grew up in the mountains of North Carolina and learned to play the banjo by listening to Lester Flatt and Earl Scruggs, Bill Monroe and the Stanley Brothers. At the age of 15 he accepted an invitation to play his first professional job at Ghost Town at Maggie Valley in the late 1960s and he played there for three summer seasons.

While at Western Carolina University he played a season with James Monroe, son of Grand Ole Opry star, Bill Monroe. After college he and his brother opened a music store but continued to play with artists like Jimmy Martin, the Whites, the Kingsmen, Billy Ed Wheeler and Ricky Skaggs.  He has written songs and recorded them with Ricky Wheeler. One of those songs was used by the National Geographic Society project called “Songs of Cumberland Gap – the Life and Times of Daniel Boone.”

Later, he played with the Lawmen, Ricky Skaggs Archie Campbell, Lester Flatt, Ralph Stanley, Patty Loveless, Rhonda Vincent and many more including an untold number of regional bands and artists.  In 2014, the N.Ca. Arts Council presented him the N.C. Heritage Award for 2015

Caleb Smith comes from a musical family so it was only natural that he began playing music at the age of 7. He has performed with artists such as Tony Rice, Doyle Lawson and Larry Sparks. He is also a songwriter with three of his songs making it to the charts.  He plays guitars that he makes himself. He recently built two guitars for Zac Brown and another for Bryan Sutton.

Tim Surrett is a multi-instrumentalist. He has been a professional musician since he finished high school, he has toured extensively, and appeared at the Grand Ole Opry, the Ryman, and Carnegie Hall.

He is a Southern gospel singer. Before his current role in Balsam Range, he was best known for his decade with the Kingsman Quartet, with whom he sang lead and baritone. He also enjoys being involved with projects with a diverse range of bluegrass, country, and gospel musicians. He has performed and recorded with Ralph Stanley, Larry Sparks, Tony Rice, the Isaacs, Vince Gill, and Brad Paisley, Keith Urban, and among many others.

Tickets can be purchased online at www.daviearts.org or by contacting the Brock’s Box Office Monday-Friday, noon-5 p.m., 751-3000.