Volleyball beats Grimsley in Round 1 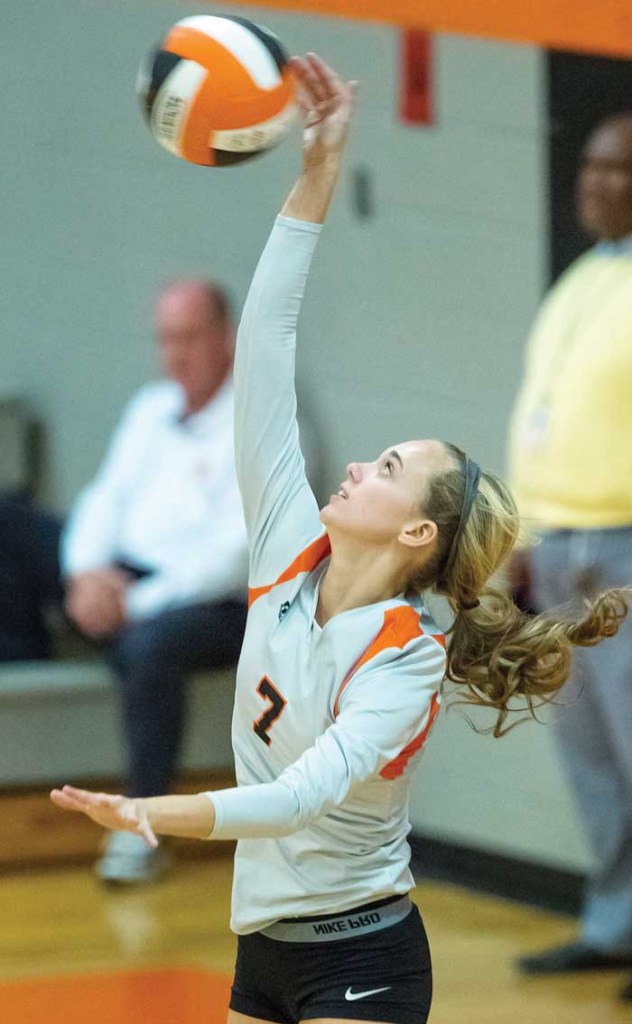 Davie’s varsity volleyball team endured a tough loss to Mt. Tabor in the Central Piedmont Conference Tournament semifinals, but the sting was eased by the first state-playoff win in three years.

Davie was the 19th seed on the road against No. 14 Grimsley in the first round on Oct. 24. The War Eagles rallied for a three-sets-to-one victory that improved them to 17-7 and marked the most wins in seven years.

In 2013 first round, they lost 3-0 at Northwest Guilford. In 2014, they failed to make the playoffs. This was the first playoff win since a second-round match at Page in 2012.

“We were a little slow to start,” coach Amber Brandon said. “My girls knew they weren’t playing great, but they fought back. In the end, they took care of business when they knew they had to.”

“The score (in the first set) was close, but they pretty much commanded the entire set,” Brandon said. “Between the first and second set, I told them we had worked way too hard this year and it was a five-set match. We knew if we didn’t walk away with a win, we wanted to at least play five sets.”

Brandon’s switch from a 6-2 offense to a 5-1 worked like a charm. Davie wound up outscoring the Whirlies 98-90, so it was anything but a blowout.

“We made a change in our offense in the second set just to see if we could play a little faster, which seemed to work,” she said. “It was a battle. It was a very good match.”

Seniors Emily Ruble and Morgan Sessoms and freshman Lauren Grooms were the catalysts.

“Hitting-wise, every ball Ruble swung at went to the floor,” Brandon said. “She played phenomenal.

“It was our freshman setter’s first playoff match as a varsity player, and she didn’t let her nerves get the best of her. Grooms got excited and got the team pumped up. She was definitely a leader.

“Grimsley had one dominating power hitter, and Sessoms got locked in on her, blocking really early. She got in her face and didn’t let her get overaggressive, which was a really good help for us.”

The War Eagles improved their all-time playoff record to 7-20 and set up a second-round match at powerhouse Charlotte Catholic on Oct. 27. In the first round, No. 3 Catholic (20-2) brushed aside No. 30 Olympic (11-14) in straight sets.

The next day in the semifinals at No. 2 Tabor, the War Eagles faced a long-time nemesis. Although Davie lost to the Spartans for the third time this year, it was a barnburner. In fact, it may have been the closest three-set match you’ll ever see. The scores were 25-22, 30-28, 26-24. In all, Tabor scored 81 points to Davie’s 74.

“We played the best that we could play,” Brandon said. “At the end, a couple balls didn’t fall our way and we didn’t agree 100 percent with a couple calls. We hung right there with them the entire match, but could never get out in front and break away.”