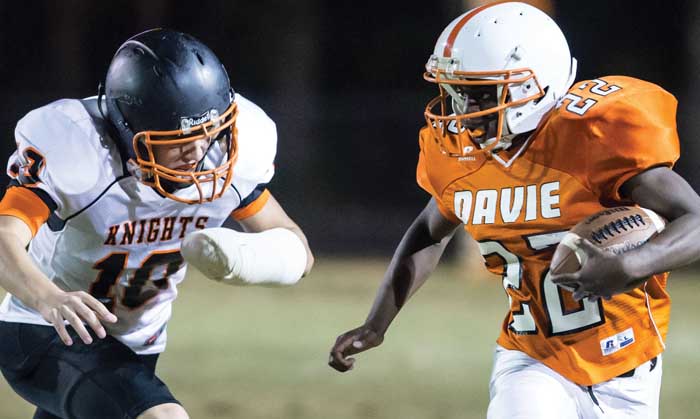 Joseph Gadson runs the ball for the War Eagles.

Carrying the longest losing streak in three years, the Davie junior varsity football team did not play with a chip on its shoulder against visiting Reagan in a makeup game on Oct. 19. It played with a boulder on its shoulder.

Getting 155 rushing/passing yards from Ben Summers and 12 tackles from Mason Wilson, the War Eagles (3-5, 1-3 Central Piedmont Conference) bullied the Raiders 31-14 to halt a four-game losing streak.

It was an especially impressive win when considering all the factors. Several freshmen and sophomores are playing up on varsity. On top of that, the JV was missing a slew of players with injuries. Still, the War Eagles mounted a 31-0 lead before settling for the 17-point margin.

“We played very well,” coach Blaine Nicholson said. “We had eight or nine injured and out for the game. We changed some things up. We asked some guys to not come off the field at all and to play their hearts out. And they sure enough did. We played a complete game. We put our foot on the gas pedal and never let up.”

Ty Dockery’s seven-yard run and Summers’ two-point run provided an 8-0 lead. It was 16-0 when Summers threw a 26-yard pass to Devin “Deadbolt” Martin and Joseph Gadson ran in for two points.

The first touchdown of the second half was Summers’ two-yard run. Gadson followed with a successful two-point play. The defense was responsible for the fifth and final TD for Davie. Jesus Olmedo’s sack knocked the ball out. Damien Garcia scooped and scored from 25 yards out. Davie usually goes for two, but Nicholson decided to let Skyler Schoppe try an extra-point kick. He made it to bump the margin to 31-0.

“Schoppe’s perfect on the season,” Nicholson said. “We’ve run muddle huddle about every time to try to be consistent with the varsity. It was a good time to work on PAT, and we executed that very well.”

Davie rushed for 124 yards, getting 45 from Gadson, 43 from Summers and 34 from Dockery. Summers completed 10 of 18 passes for 112 yards, including connections with Martin (four catches for 52 yards) and Wilson (two for 40).

“Summers was efficient,” Nicholson said. “He was understanding it’s OK to pull it down every once in a while and get two yards. That’s much better than an incompletion.

“Jimmie (Welch, who called plays) called a great game because he continued to let the clock run. That really helped our defense. It’s probably the best the offense has looked as far as efficiency, taking time off the clock and getting four yards a play.”

The defense was equally strong as it allowed the fewest points in six games.

“The defense swarmed to the ball,” he said. “Our red-zone defense was nearly perfect. They got in the red zone four times and scored once.”

Davie got a spark from Wilson, who played the spur position.

“He played almost every snap,” Nicholson said. “He played hard-nosed; they couldn’t do anything around the edges.”

Wilson got plenty of help from defensive lineman Olmedo, rush end Garcia and free safety Martin. Mitchell Ijames had an interception in the first half.

“We were very shorthanded on the defensive line, and Jesus stepped up in a big way,” he said. “We asked Garcia to play a rush end – he had been playing linebacker all year – and he did exactly what he was coached to do in short notice.

“Martin was all over the field as usual.”

Notes: Davie played its fourth game in 12 days. … Davie scored the most points since the last win, 37-34 over Dudley on Sept. 3.