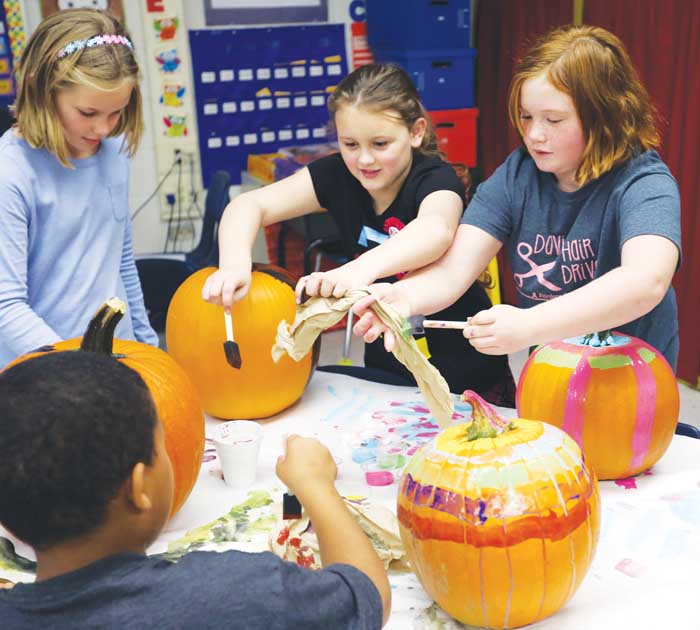 Third graders at Mocksville Elementary School were treated to a surprise visit from  28 high school students on Oct. 23.

Members of the Student Government Association and their advisers, Jenn O’Brien and Lynn Wisecarver, traveled to MES where they led the students in a pumpkin painting activity.  Food Lion on Valley Road donated 105 pumpkins for the students to use.

“We wanted to be more involved in the community and give the SGA students a chance to give back to the school system,” O’Brien said.  “With Halloween approaching we decided to go to an elementary school to work with the younger students.”

Wisecarver contacted Elizabeth Starnes who teaches third grade at MES to ask if her team would be interested in allowing their students to have a Fun Friday activity with the SGA.

“At first I thought that they wanted to come in and paint one pumpkin per classroom, and I was astounded to find out that they were going to give all of our children their own pumpkin,” Starnes said.

Anne McCulloh, manager of Food Lion 2677, and produce manager Brian Wisecarver,  arranged for the pumpkins to be donated and delivered to the school where they were unloaded by SGA members eager to begin the activity.

The teenagers got the paint supplies ready and reported to one of their preassigned  classrooms where they helped students design and paint their pumpkins.

“This was such a fun activity,” SGA President Claire Devereaux said.  “I really enjoyed painting with the kids and watching them come up with unique designs and then going outside to play with them.”

The teachers took notice of how well the high school students were able to relate to the third graders.

“I was really impressed with the group in my room and how they talked to my students. They were helpful and encouraging, and they drew out students who were shy and made them feel special,” Starnes said.

After the pumpkin painting and clean up, everyone went outside to the playground where some of the teens had a chance to reconnect with their inner child by playing on the slides and swings with their younger counterparts. Others decided to sit and rest.

“This was fun but tiring because they have so much energy,” Elisabeth Beauchamp said.  “I’m ready to get back to big people school now.”

Some of the high schoolers were astonished at how well they were received and how the younger students seemed to develop an immediate kinship.

“I had just met these kids, but when we were getting ready to leave they were yelling ‘bye’ to me and calling me by name,” Molly Hartness said.

SGA completes one service project each month, but according to the students who attended this project, it was the most successful.

“We had so much fun, and it gave us a chance to get out there and interact with people in the community and get exposure for what we do as SGA members,” Gabby Boada said.  “We brought a different perspective to this activity because we could relate on a different level with the students since we are closer to their age.”

SGA participated in events in the past and plans to increase those activities for the future since their mission involves growing leaders and teaching the importance of giving back to the community.