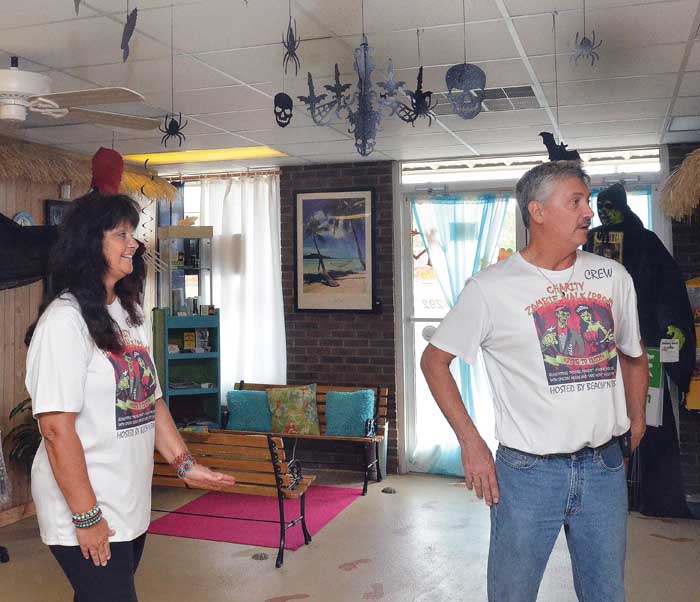 You don’t have to come in costume to enjoy the Zombie Walk & Prom Saturday at Beech’N Tans’ charity event in Mocksville, but remember one thing. Humans are zombie food.

More than 250 people dressed as all types of the undead – zombies – are expected for the walk starting at 5:30 p.m. Bring a lawn chair and watch the parade from just beyond the overhead bridge on US 601 South to the VF Jeanswear parking lot and back.

The Coffin Cruisers, a group of tricked out hearses, will be part of the parade. The Psych Ward will be there. “It drives along … and I’ll just leave it at that,” said Mike DePeuw, who is organizing the event along with his wife Sandy and a horde of volunteers.

Expect to see some from the Forbidden Forest Horror Trail, Digger the Zombie, Infinity Elite Gymnastics, and dancing by Leah Hines.

Proceeds will go to the Milling Manor home for women. Just Hope will have a truck on hand, accepting donations of canned food to be given to hungry Davie residents.

The parking lot of the business will be closed for the day, opening at 1 p.m. with vendors and food. Kids events are from 3-5 p.m., with a costume parade around the parking lot, Lowes workshops, Ms. Lynn’s Spooky Tales of the Unknown, trick or treating and more.

Kids can participate in the parade, with an adult. DePeuw says some of the costumes will be spooky, gruesome, gory and bloody. While fun loving, it may not be appropriate for young children.

At mid-point in the parade, at the VF Jeanswear parking lot, zombies will perform “Thriller” before returning for the prom.

“The Zombie Patrol will be there to keep all zombies in line,” DePeuw said.”So don’t be afraid, your brains are safe.”

“It’s really going to be a show. The parade will be a big show,” he said.

While you can watch the walk for free, admission to the event is $15 for adults, $10 for those 10-17 and $8 for those ages 5-9. The lights, fog and live music by the band Nazariff will go from 7:30-10 p.m. A prom king and queen will be crowned. Expect surprises. Maybe even a monster jam by the band. After all, it is the prom everyone is dying to go to.

The couple loves Halloween, and their store is full of the decorations.

About five years ago, the DePeuws joined friends to do a flash dance to “Thriller.” It was a hit, and they’ve done it year after year. A small group turned into more than 25.

“This is our thing,” DePeuw said. “Everybody around here is used to it. It’s all for fun.”

Like he said, you don’t have to be dressed as a zombie to attend. Shop at the Monster Boutique and join the fun.