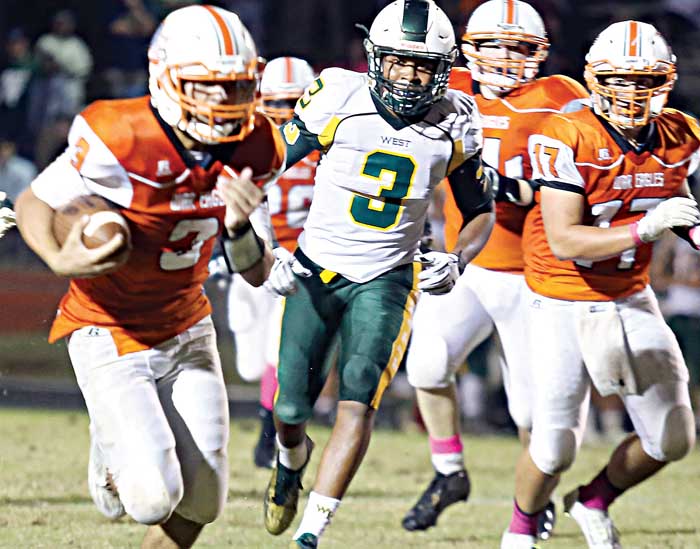 Few folks expected a major contest when West Forsyth visited Davie’s football team last Friday. The War Eagles, who were lackluster the week before at Reagan, looked overmatched on paper against the Titans.

But Davie brought an inspired effort. It was 15-7 Davie at halftime and it was 22-22 after three quarters. The Titans (5-2, 2-0 Central Piedmont Conference) emerged with a 36-22 decision, but it was no day at the beach. They scored two touchdowns in the final 10 minutes to notch their fourth straight win. Davie fell to 3-5, 1-2.

“I’m going to steal a line from coach (Dabo) Swinney from Clemson: ‘We brought our guts tonight,’” West coach Adrian Snow said. “We had to. They got after us, we had to make some adjustments and our kids just gutted it out.”

Although the end of the night was heartbreaking, this dramatic about-face might be what changes the trajectory of Devore Holman’s program.

“Their heads are hanging right now,” Holman said. “That’s the most I’ve seen them fight for each other all year. Sometimes it’s a toss-up. If we can fight hard like this the rest of the way out, some of those toss-ups are going to bounce our way.”

Davie quarterback Chris Reynolds wasn’t perfect (three interceptions), but his performance was enough to take your breath away. All he did was rush for 108 yards and complete 26 of 38 passes for 268 yards as the War Eagles outperformed West all over the stat sheet: 27-14 first downs, 228-154 rushing yards and 496-421 total yards. It’s impossible to overstate how good receivers Ben Ellis (10 catches for 95 yards) and Cooper Wall (nine catches for 109 yards) were. Reynolds repeatedly found them on underneath routes even though West, coming off a bye, had two weeks to prepare.

“They gave us the hitches and stuff like that,” Holman said. “Our motto on offense is four yards.”

“I told our kids on Monday: ‘You think it’s going to be this and that, but you’re wrong. Their backs are against the wall,’” Snow said. “Every year I’ve been here – eight years – we’ve beat them one time by a (wide) margin, and I knew it was going to be a fight.

The difference in the outcome: West won the turnover battle 4-0, and West has a Rolls-Royce in Darion Slade, who rushed for 112 yards, had six catches for 136 yards and scored three times (one rushing, two receiving). But after Slade took his second carry 67 yards, Davie shut down the West ground game. Slade had 13 carries for 45 yards after his long run, and the other ball carriers combined for 42 yards on 20 attempts.

“They put a lot of pressure on us up the middle,” Snow said. “The crazy thing about it is, they did it two or three years ago over here kind of the same way. We just had to find a way to make plays.”

With the game scoreless, Boyle tackled Slade for a five-yard loss to set up third-and-goal at the 7. On fourth down from the 3, Slade tried the middle, but only gained a yard as Hendrix made the stop.

Following the defensive stand, Davie came up with an amazing drive: 13 plays and 98 yards. Reynolds ran for 66 yards on four carries, and his six-yard pass to Wall on third-and-5 at midfield was the only time Davie faced third down. Reynolds sliced and diced 15 yards to the West 1, and Curtis Gray scored from there. Reynolds’ two-point pass to Beau Byerly, who made a juggling catch as he hit the ground, gave Davie an 8-0 lead.

“If you look at it on paper, you probably say they will blow us out of here,” Holman said. “I don’t like Chris taking a lot of big hits, but he puts his team on his shoulders and he’s willing to do what it takes to get it done.”

Davie forced a three-and-out as Hendrix dropped Slade for a five-yard loss on first down. With Hendrix pressuring Slade on a pass attempt, Anthony Hunckler had blanket coverage on the intended receiver. On third-and-15, freshman safety Hite Merrifield kept Slade from getting the first down on a QB draw, stopping him in space three yards short.

Six minutes later, West failed on third down for the fifth time in as many tries, and its kicker missed a 30-yard field goal. The Titans needed a jolt with three minutes left in the half, and they got it from linebacker Baer Hunter, who intercepted an over-the-middle pass and returned it to the Davie 14 to set up Slade’s two-yard TD run that cut Davie’s lead to 8-7.

“I think it may have been a tipped ball,” Snow said. “I struggled tonight. I’ll be honest with you. We’ve got to pick each other up when it might not be your best day.”

On fourth-and-4 from the Davie 40, Holman rolled the dice by faking a punt. The upman, Byerly, took the snap and lumbered six yards. Byerly was a strong contributor, making four catches after entering the day with four receptions through seven games.

“Coach (Doug) Illing always told me: ‘Sometimes you’ve got to take a chance when it’s not expected,’” Holman said. “We did the same thing at North Davidson (in 2009). I said: ‘What the heck? We practice it all the time and why not try it.’”

Immediately after the fake, Reynolds found Wall at the West 32, and Wall sprinted in for a 46-yard touchdown. Jared Griggs’ extra point provided the 15-7 halftime lead.

“When Wall gets the ball in his hands, he’s made plays all year,” Holman said. “He’s hungry. He wants to make plays.”

In the opening minutes of the third quarter, Davie lost a fumble at its 35, but Farmer’s tackle for loss and safety Caleb Wallace’s tight coverage forced a punt. Then came Stephon Dalton’s first carry of the night, a 56-yard explosion around right end. Davie, however, stalled and a 42-yard field goal was blocked.

West quarterback Jayshawn McMillan went deep to Slade. Cornerback Angel Perez was stride for stride with the West star, but Slade made the catch at the Davie 40 and went to the house for a 74-yard score. McMillan’s two-point run tied it at 15.

“Perez was with him,” Holman said. “Slade made a heck of a play. We were shoe to shoe with him.”

In a span of five plays, Davie roared from its 19 to the West 31. Wall caught a short pass, put on a juke that sent the West defender to the ground and raced to the end zone for an apparent touchdown that would have had West on the ropes again. But the line judge ruled that Wall stepped out of bounds at the West 17, and linebacker Kevin Sims intercepted a pass over the middle on the next play.

As if that wasn’t sickening enough for Davie fans, a War Eagle batted a screen pass on third-and-11, but Darriel Brown corralled the ricochet and sped 30 yards. Then McMillan tossed a flare to running back Marcus Caldwell, who went 55 yards untouched to give West a 22-15 lead with 2:44 left in the third.

“We sat on the screen,” Holman said. “We touched the ball and their guy – not the guy it was designed to go to – gets it in his hands. That’s how the ball bounces sometimes.”

The War Eagles refused to be rattled. Reynolds broke a 35-yard run to the West 4, he completed a pass to Ellis to the West 1 and Gray scored. The extra point by Griggs, who filled in for injured Jonn Young for the fourth week, tied it at 22.

“Griggs stepped up his game,” Holman said. “At a crucial time, he made the extra point. Right before half, we said: ‘Do we squib it or kick it deep?’ Our guys said: ‘Let’s kick it deep.’ And Jared kicked it in the end zone.”

The momentum swung back to West when Brown made a 41-yard reception to the Davie 9.

“(Brown) called that play,” Snow said. “He said: ‘Coach, I’m telling you it’s open.’ We do a pretty decent job of listening to our kids.”

Boyle slammed McMillan for a four-yard loss and Caldwell tripped and lost three yards on second down. On third-and-goal from the 16, Slade came through again, this time catching a touchdown between two defenders. It was 29-22 West with 9:51 remaining.

“He’s a player,” Snow said. “Everybody in Davie County knew where that ball was going. I told him if he didn’t catch it, I was going to make him walk back to Clemmons. And he went up and made the play.”

“They’ve got a special guy over there,” Holman said. “I’m going to tell you what, you can’t hem him up in a phone booth sometimes.”

Still, the gutsy War Eagles responded splendidly in their attempt to drive for a tying score. On third-and-12, Wall made a 14-yard reception on a bubble screen. West blitzed on third-and-5, but Mitchell McGee made a shoestring catch for six yards. Gray ran 11 yards to the West 9, then two yards to the 7.

Then the dream of a big upset died. Davie had two penalties for 10 yards for the game before a 15-yard chop block pushed it back to the 23. Then – on the 13th play of the drive – defensive end K.J. Henry intercepted and returned it 95 yards for a West touchdown. That was game, set, match.

“Our AD is standing there and said that’s our starting center in basketball,” Snow said of Henry. “I said: ‘Nah, he’s our starting defensive end and he made a heck of a play.’”

“We fought as hard as we could,” Holman said. “It didn’t bounce our way tonight.”