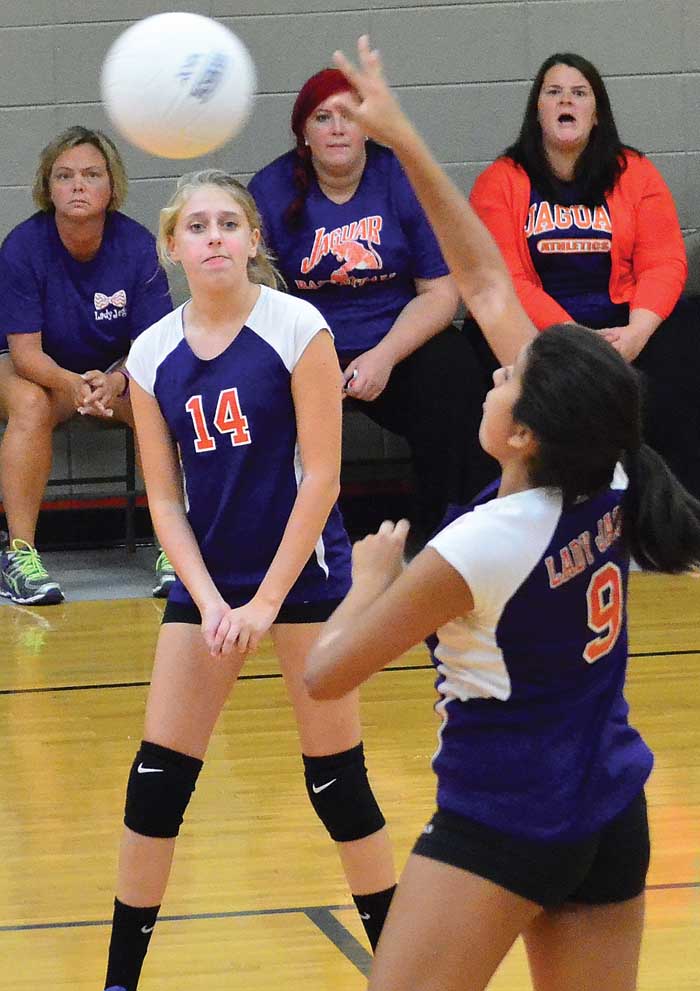 After an 11-day layoff, the Ellis varsity volleyball team returned to the court with convincing wins over  Wesleyan Christian Academy and North Davie.

Against Wesleyan on Sept. 28, the rust on the Ellis game was apparent, if only for a short while. “Our serving and passing was off in the beginning,” coach Beth Hall-Love said.

The teams traded points, with Ellis able to eke out a 6-5 lead. After one of Kayla Moore’s team-high four kills, the Jaguars took an 11-7 lead and regained the serve. Dakota Hutchins increased the lead to 19-8 by going eight out of nine serving with a team-high five aces. From there, Ellis cruised to a 25-14 set win. Moore added two aces. Zoe Clark (two kills, block), Abby Sloane (kill, block), Jessie Crosby (kill) and Allie Angel (kill) rounded out the scoring.

In the second set, Ellis took control from the beginning by opening up an 11-2 lead behind the serving of Abby Sloane (six for six, two aces) and Zoe Clark (six for six, four aces). Moore and Hutchins led the offense, garnering four kills each. Anna Ortiz (kill, block), Allie Angel (kill) and McKenzie Stakely (ace) contributed to a 25-11 score.

“Once we shook off the rust, we played what was probably our best all-around match of the year,” Hall-Love said.

Sloane led the way in the first set, hitting nine out of 10 serves with 3 aces. Clark was a perfect 10 for 10 with an ace. Hutchins added a perfect five for five with four aces and a kill to go with  Allie Angels’ ace and kill as well as Moore’s two kills.

In the second set, North was able to stay close with the score 7-6 Ellis. Hutchins then held serve for 10 straight points to pace the Jaguars to a 17-7 lead. During her run, Hutchins had three aces, while Anna Ortiz contributed three of her team-high four kills.

“(Hutchins) has been one of our most consistent servers all season, and Anna has done a great job coming off the bench to play the middle,” Hall-Love said.

Hutchins also added a kill to the stat sheet, while Moore and Sloane had one ace each to finish out the match.

The Tigers (2-5) won the first set before losing the second set. In the decisive third set, they steamrolled 15-4 to snap a five-match losing streak.

“Kayanna Caldwell really stepped up as a leader and had some important serves and some great passes.

“Millie Baysinger struggled the first two sets but really pulled through and played a big role in the third set with several smart tips.”

The Ellis junior varsity improved to 4-0 by defeating North Davie in two sets (25-6, 25-9). Not only are both Jaguar teams undefeated, they have not lost a set this season, with the JV Jaguars beating their opponents by an average set score of 25-11.

Against North Davie, Ellis used the strength of its serving game to subdue the Wildcats rather quickly. In the first set, Ellis was 22 of 24 on serves with a total of 11 aces. Elizabeth Tilley led the way, starting the match by going five out of six with four aces. Angela Zamora closed out the set going four for four with four aces. In between, Presley Jones went three of four with an ace, Sarah Bracken two for two with a kill and Carmen Tomlin had two aces during her 4-for-4 run.

“Coach Little and I were very proud of how well our girls played together at North,” Ellis coach Samantha Wallace said.

The final set was more of the same from the Jaguars. Jones was the leader, hitting nine out of 10 serves with five aces.

“Presley stepped up as a leader on the court,” Wallace said.

Tilley followed close behind with a 6-of-7, 3-ace performance. Zamora added an ace and two kills to go along with Tomlin’s ace.

“This is the second time that we have played North Davie this season, so it was great to watch how much our girls have grown and improved since the first time we faced them,” Wallace said. “We have two alternate (practice) players, Salma Ataalla and Natalie Dezarn, that were able to get on the court for the first time this season, and watching how much their teammates supported them and helped suppress their nerves was amazing.”