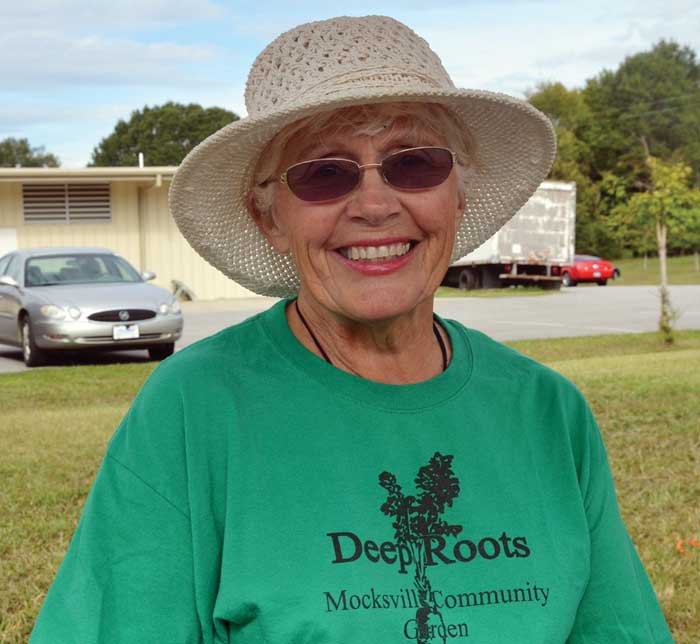 Lonnie Howell was a kind and generous man – even with the bounty that came from his garden off US 64 East in Mocksville.

When he died, the garden went into disrepair. Weeds quickly took over.

Along come Diane Salmon and the Deep Roots Mocksville Community Gardens she started. Looking for a place to plant a new community garden to grow food for the needy, she contacted Marie Collins at A Storehouse for Jesus.

There was plenty of land at the Storehouse site, and Salmon was welcome to use it. There was even a former garden site.

“We think he’s looking down, saying ‘My gosh, look at that’,” Salmon said. Howell’s grandson, Gilbert, is among the volunteer gardeners.

A member of First United Methodist Church in Mocksville, Salmon was listening to a visiting preacher at the annual Sprinkle Preaching Mission. He encouraged the congregation to think outside the box – to find a need and match it with something they like to do.

Salmon liked gardening. Her daughter had started a community garden in Huntsville, Ala. “If I can do it, you can do it,” she told her mother.

Then Joe Harris offered some land off Clement Street near the church in Downtown Mocksville. With the help of Boy Scout volunteers, up went some raised beds.

“God doesn’t do anything small, so we went for it,” Salmon said.

And the gardeners like the plan, too. They’re welcome to keep all of the produce they need, and donate the rest to someone who needs it, or to a group like the Storehouse or Just Hope, which directs it to people who need it.

The first year, the gardens donated 610 pounds of produce. This year, more than 1,023 pounds have been donated, and the sweet potatoes haven’t been dug up yet.

Gardeners pay a small fee for their spots. Clients who receive food from the Storehouse or other agency can have a plot for free. Salmon thought it a good idea to give them a hand up, not just a hand out.

A few took her up on the idea, but she quickly realized that many of these people do not have access to reliable transportation. Many borrow a vehicle to go to the Storehouse to get food, she said.

There was also a language barrier among some of the clients.

“But they want to help their families.” Fresh produce is welcomed by most.

The Clement Street garden has several beds dedicated for use by children. Salmon wants part of the ministry being to teach people how to garden – organically – and letting the younger ones know the joy they can get from growing their own food and flowers.

“We get excited and want to do more, but we have to calm down,” she said. “It’s good and fun and you meet a lot of good people.”

The gardeners are learning as they go. Certain crops are too time consuming. Others are more popular.

Elizabeth Vines is one of the gardeners at the Storehouse site. She loves it, and is still learning. Commenting that her tomatoes were all green one day, another gardener told her to try fried green tomatoes. Vines had never heard of such, but a neighbor fried some for her, and she like them.

The Mocksville Community Gardens have been a success, but don’t expect Salmon to rest on those laurels. There are already plans to build more raised boxes at both sites. She wants to make the sites a destination for folks.

“This is just so much fun,” she said.

Her t-shirt says it all – Deep Roots logo on the front, and the slogan on the back: “Encouraging healthy neighborhoods one garden at a time.”