Tour of Farmington gets thumbs up 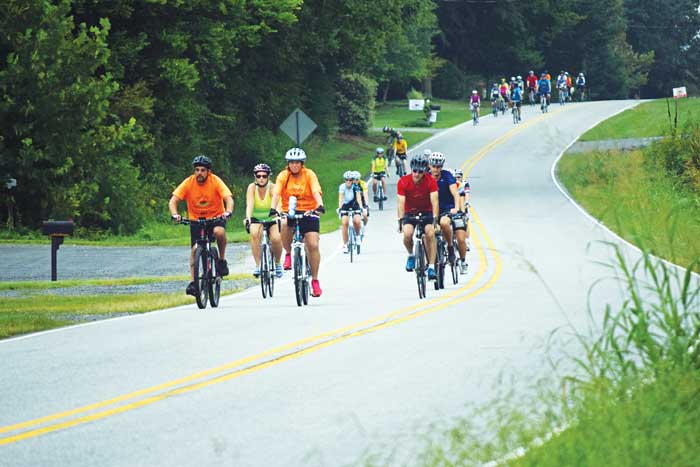 The Tour of Farmington bicycle ride gets under way.

What is the best way to tour beautiful Davie County?

Ask the 193 cyclists who participated in the 2015 Tour of Farmington event on Sept. 12 and they will tell you – on two wheels.

The cloudy day with chances of rain did not dampen the spirits of the attendees  – and the numbers increased from 160 cyclists in 2014.

The tour was started six years ago as the inspiration of Garry Steele, a Farmington resident who has been involved with the Farmington Community Center as a board member for more than 15 years. Garry had a vision to promote cycling in the area and raise funds for the newly-created Farmington Nature Park on the site.

The Farmington Nature Park is a work-in-progress on a 63 acres given to the community center by Louis C. and Martha Smith in 2007. The park includes a hiking and mountain biking trail, with fishing along Cedar Creek which borders the property. There is geocaching on the site – visit www.geocashing.com  and “If These Walls Could Talk” for details. Future plans for the park include a disc golf course, an outdoor amphitheater, and picnic shelters with a civic campground. Visit www.FarmingtonNaturePark.org to find more information.

Along with the park, the community center provides family-friendly recreation and programs.

The Farmington ball field and tennis courts stay busy and have served thousands over the years.

The center’s facilities are available to rent for special occasions. Visit www.FarmingtonCC.org to learn more about the community center’s mission of “Preserving the Past to Promote the Future”.

The Tour of Farmington was a fully supported cycling event with routes of 13, 23, 43, and 63 miles through beautiful rural roads in Davie, Yadkin, and Iredell counties.

The FeedBag Restaurant provided a full breakfast to the cyclists before they took off and cast-iron chili, pasta, hotdogs and homemade desserts provided by volunteers were served to the riders upon their return to Farmington.

The cyclists were pleased with all aspects of the event, and have made comments on Facebook and other social networking sites such as “Another awesome TOF event! I am so glad the weather cooperated; a great ride with delicious food at the end. A job well done to all the folks that work hard to make this a successful event!”

The Davie County Sherriff’s Department handled parking, SAG (support and gear), and general oversight of the event. United Way volunteers provided SAG for the cyclists, and other community volunteers manned rest stops, cooked and assembled meals, cheered the cyclists on, promoted, photographed, and the list goes on and on.

The bike shops who participated in the event by promoting the tour and providing support at points along the route included Skinny Wheels, Clemmons Bicycle, Cycletherapy, Mock Orange Bike, Paul’s Cycle and Fitness, and Ken’s Bike Shop. We couldn’t do this without their support and appreciate their willingness to promote cycling and our event each year.

Another group that promoted this ride incredibly is the “Clip In and Ride Cycling Group” which is part of meetup.com. Anyone interested in getting into cycling should check this group out, as they are a supportive group of more than 400 people who will help you enjoy the fun of cycling again (just like when you were a kid) but also stress the safety aspects of group riding and etiquette. They post rides in the Triad area, many times from Farmington or Mocksville.

Thanks, also, to the vendors who set up booths. We had a good assortment of vendors. And we send a huge thank you out to all of our corporate sponsor. We are especially grateful for Farmington-based SMEX (Smith Excavating) which joined as a $2,500 signature sponsor.

Lastly, we appreciate the 193 cyclists who made this tour such a success, with more than $12,000 raised to benefit the nature park.

Another rider’s comment sums it up: “Best little town ride in North Carolina! They truly put on the best ride. Great breakfast, t-shirt, goodies, rest stops with tons of food, very low traffic roads with awesome scenery & to top it off they also feed you lunch. Just incredible!!!”

Thank you for the support and see you in Farmington.