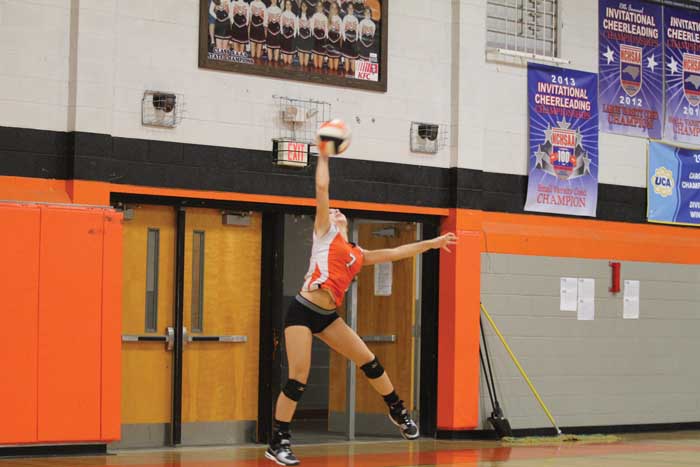 Davie’s varsity volleyball team did not beat Mt. Tabor for the first time in years, but the War Eagles scared the daylights out of Tabor, and now there’s tangible reason to believe they could end up earning at least a share of second for the first time since 2008.

Davie has lost 10 straight in the series and 23 of 24. But during the losing streak, this is the first time it has pushed Tabor to five sets. Last year Tabor rolled to a pair of 3-0 wins over Davie.

“If you look at the history against Reagan and Tabor, this senior class has never experienced being on the brink,” coach Amber Brandon said. “Even though we walked away with upset stomachs – we were so hurt – that was probably one of the most vital points in this program. These kids bought into what I said. They didn’t give up. That was huge. They were texting each other: ‘Don’t hang your heads. We played great.’ No one was blaming each other. It was a good moment for our program even though it was a loss.”

After falling narrowly short in the first set, Davie dominated the second set. “When we lost the first set, years past we would have tucked our tails and walked away,” Brandon said. “And we didn’t.”

Tabor won a very tight third set. Davie answered with a close win in the fourth. “We hung in there and fought until the end,” she said.

“She played the best I have ever seen a libero play for five sets,” Brandon said. “In the stat book, she was almost perfect. Sometimes hitters get all the credit and all the glory. But in my eyes, Allie was definitely the player of the match.”

Morgan Sessoms and Emily Ruble were in top form.

“Because Morgan is a middle, she doesn’t get a ton of hitting opportunities,” she said. “But she definitely found the hole in Tabor’s defense early and attacked it all night.

“Emily had a lot more opportunities and was definitely our best hitter. She was aggressive all night. Both teams were swinging hard, so there weren’t lots of perfect passes on defense. We wanted every ball to get a second contact. Emily worked with what she got, so I was really impressed with her play.”

The fifth set – the first team to 15, winning by two – was a nailbiter. Davie would have Tabor in trouble, then the roles would reverse at the blink of an eye. Davie trailed 14-12 before rallying for a tie at 14. Tabor, though, would emerge with the 17-15 win.

Brandon said Davie executed its game plan and left everything on the floor.

“The best I can remember, we only had one ball that got to the area that we were trying to take away,” she said. “I thought we went in with a really good game plan. All the girls were on board. We’ve been working and focussed toward this game, and it all went right. We couldn’t ask for our game plan to turn out any better. It was just those couple of points did not quite fall our way.”

In regard to the coaching matchup, it was teacher vs. pupil. Brandon played for Tabor coach Robyn Wesselman when they were player and coach, respectively, at Forbush. Wesselman has 400-plus wins in her stellar career.

“It was fun (coaching against Wesselman),” Brandon said. “I try not to make it into a huge deal. I respect her as a coach, love her as a coach. But I really wanted to make this about my girls and not me. (Wesselman and I) hung out a little bit before, just talking and catching up. After (the match) … I was ready to get out of there.”

Third-place Davie did what it expected to do to Reynolds, beating the Demons for the 23rd time in a row.