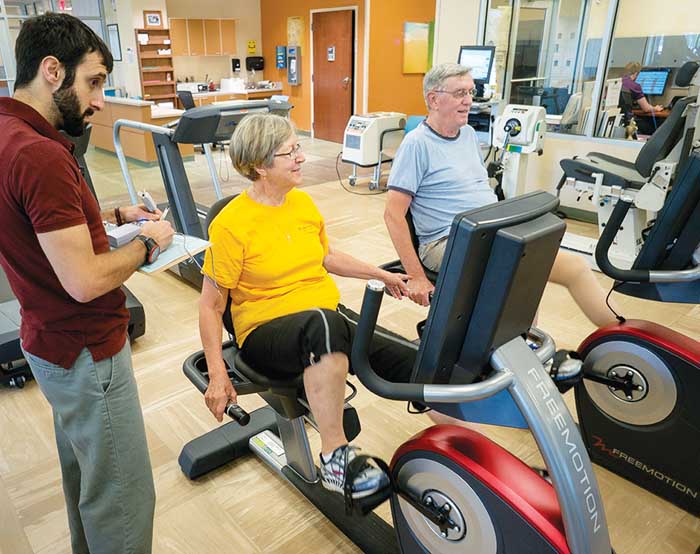 Helen Aneskewich had recovered from a heart attack and quadruple bypass surgery in 2011 and later became a regular participant in the cardiac rehabilitation program at Wake Forest Baptist Health-Davie Medical Center.

Then her husband, Jerry, was diagnosed with Parkinson’s disease.

After the diagnosis, he began physical therapy and was encouraged to exercise regularly at a Winston-Salem gym where he might be supervised. But that wouldn’t be easy because the couple lives in Farmington.

Instead, Helen said, her husband stayed home and sat in his recliner for the three mornings a week that she worked out in the gym at Davie Medical Center.

But Jonathan Rifkin, the exercise physiologist who supervises the gym, had a suggestion.

Because Helen had been a maintenance member at cardiac rehab since the Davie facility opened in October 2013, her husband could obtain the supervised rehabilitation he needed there. Now Jerry Aneskewich has been a “regular” at Davie Medical Center for a year.

“I look forward to coming,’’ said Jerry, who is 76. “I feel stronger. I’m able to get myself out of bed; I’m able to walk with a cane quite handily. My arm strength and shoulder strength are a lot better, and my core strength is better.”

Working on a stationary bicycle that monitors his heart rate also gives Jerry a sense of security compared to working out on his own or at a regular gym. He has a type of hypertension that can cause high or low blood pressure at any given moment. At Davie Medical Center, when he feels even a little lightheaded from low blood pressure, he has it measured right away to determine if he should stop exercising.

Helen continues to walk the indoor track, use cardio machines and sit in on educational classes about diet, exercise and lifestyle.

“Cardiac rehab has helped both Jerry and Helen in the obvious way:  maintaining and improving physical function over the course of their recovery and disease progression,” Rifkin said.

“But it’s also helped them in a not-so-obvious way—by providing them with social interaction, support and friendship development,’’ Rifkin said. “Sometimes people just need an outlet so they can forget their day-to-day stressors while still being monitored. It’s a safe environment where they can talk about sports, grandkids, community events.’’

Many of those who crowd the Davie Medical Center gym daily are, like Jerry and Helen Aneskewich, maintenance members who have long since completed the typical mandatory 12-week rehab after a heart attack or open heart surgery.

“We do have a large percentage of maintenance participants, and most of the people in Helen’s class have no plans on leaving any time soon,’’ Rifkin said. “Many of them have been in the program for one to two years or more.”

Helen said she intends to keep up with her program indefinitely.

“I encourage other people to come in on a maintenance level like me,” Helen said. “You think you can do it by yourself, but unless you’re tremendously self-motivated, it’s hard.”

Helen’s commitment not only got her husband exercising at Davie Medical Center, it led to her selection as a patient advisor on the center’s Patient and Family Experience Team, which seeks to improve all aspects of care at the facility.

“She’s the voice of the patients,’’ said Landon Lynch, team coordinator. “Every time she comes in, she has different ideas to help make things that much better. Her value to the team is huge.’’