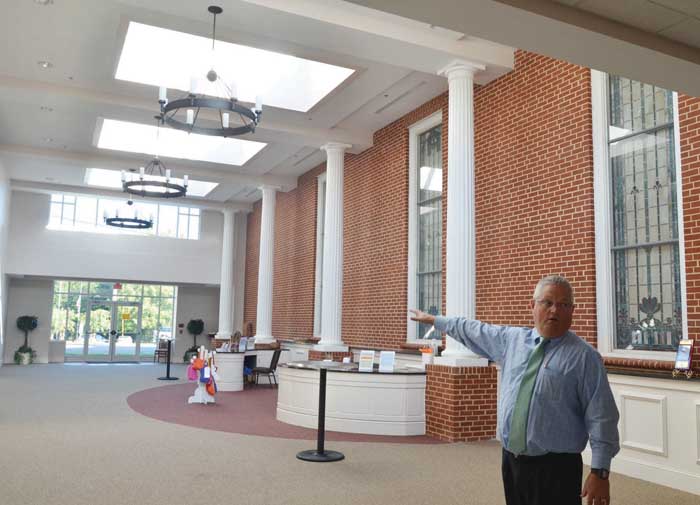 Pastor Shane Nixon points to the open entrance to the addition, with natural skylights to highlight stained glass windows.

It’s taken some 30 years of passing ideas back and forth – but Mocksville First Baptist Church has a new addition that has already brought new life to the congregation on North Main Street.

Called The CORE (Christian Outreach Recreation Evangelism), the space is already being booked for weddings and special events.

“We think of this building as the core of who we are,” said the pastor, Shane Nixon. “The flexibility of that room appeals to the people of Davie County.”

Social services has held meetings there. So has the police department, and movies have been shown. It seats 463, and services can be broadcast back and forth from the main sanctuary. Contemporary early morning services are held in The CORE, with a more traditional service later in the sanctuary.

There’s good news and bad news. The  good: the church is growing rapidly. The bad – the space is already filled.

“The building is great, and it has been a wonderful journey,” Nixon said.

The effort to build a new fellowship hall started about 30 years ago when the old hall, which held 125 people, often had 150 or more  for an event.

Dr. Larry Hovis was pastor when ideas began to re-surface in 2000, but there was disagreement whether to build a completely new building, or add onto the already cramped campus.

“We went back and forth a lot and got nowhere,” Nixon said.

Members realized something had to be done after someone died from heart failure while waiting their turn to go into the old fellowship hall.

The effort picked up steam after Nixon arrived in 2011. A million dollars was raised, with another $1.5 million in pledges.

“We were convinced that we could afford it, and that God was in the plans. God is the reason we were able to accomplish this. We’re blessed.”

For the past four years, the church had two weddings. Since the new building was opened this summer, nine are scheduled. “It’s amazing,” Nixon said.

Church member Kevin Marion was the architect, and Nixon is proud of the features Marion came up with in the green building to cut back on heating/air and lighting costs, to put an ampitheater at the back, and just to make the entrance a welcoming place.

Since it was connected to the old sanctuary with historic stained-glass windows, skylights were added so that sun would still shine onto the windows in the entrance, called The Gathering Space.

A three-story building that held the old fellowship hall in the back was condemned, and torn down. Members are talking about the best way to use that space.

Nixon, a former employee of the Baptist State Convention, feels fortunate to be in Mocksville, his first church. He had filled in a couple of times here, and was on vacation at Disney World on a busy Dec. 27 when someone tapped him on the shoulder and introduced his as their preacher.

“I began to see that somewhere along the way, Mocksville had already started to consider me their pastor,” he said. “Almost immediately I learned this is a job for this entire community. You’re a pastor to the community whether you want to be or not.”

Nixon is getting to fulfill a dream. He had wanted to be a history teacher and basketball coach. He’s an assistant coach for the Davie High boy’s team. And he’s done a pretty good job of absorbing the history of Mocksville First Baptist Church.